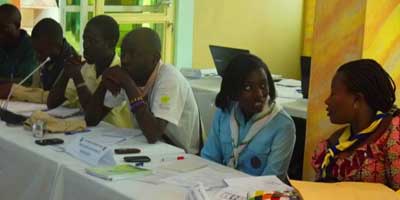 Ezechiel Mushagalusa (4th from right), COFAPRI’s sensitizer in Nyangezi. explaining what COFAPRI is doing to help the youth to avoid violence and overcome stereotypes.

From 2nd to 3rd April 2015, a workshop on ‘Youth Manipulation, Stereotypes, and Violence was held in the Great Lakes Region’. It was organized by the Coalition of Youth Scouts in the region.

COFAPRI was invited to participate and share the members' experience on this issue. Mr. Ezechiel Mushagalusa, COFAPRI’s sensitizer in Nyangezi, attended the workshop on behalf of our organization.

Other people and organisations from the region came for the same issue. The region includes Burundi, Rwanda, and the DR Congo, and all of these countries have experienced warfare and turmoil since 1994 with the perpetration of genocide in Rwanda.

Different speakers shared their experiences, including COFAPRI. Everyone had something in common regarding the theme, arguing that despite the fact that the region has lived in chaos, peace is still needed. For them, if we need peace, we have to initiate our youth on how to live peacefully with themselves, their families, and the community. Also, our youth need to avoid stereotypes and discrimination, but live in harmony because all the people are the same in the region.

They share boundaries, languages, cultures, and traditions. They admitted that some unwilling politicians do nurture separation of people for their personal interests, and the youth should be aware of this.

“My country, Rwanda, lived a horrendous period in 1994 when a genocide was waged against the Tutsi. Tutsis were given names, were labelled and killed awfully. We need to live harmoniously and this will only happen when the youth are educated in this way, from home, to school, and in real life. Stereotypes and manipulations are destructive to minds and bodies.”

Ezechiel explained how COFAPRI is helping children attend school in order to be educated and have a better understanding about how conflicts and hatred damage countries – and that the youth as well are damaged as they are forced to enter fights. War is a crime that gyrates around power, greed, hostility, and violence. Moreover, he added, that due to war, rape occurred and the DR Congo has been called the 'World Capital of Rape.' This infers that the rape committed on women is not a crime of sex and passion.

We always believe the youth should never be forced to participate in any manipulation or stereotypes, as these often lead to hatred and violence.

“We have to speak the same language; the language of unity, peace and love of human beings. Stereotypes and manipulation water violence in our minds; being young, we have to better understand that our neighbour needs peace just like any other person, like you and me. We have the same blood as human beings, this is our identity. Our region needs us for its peaceful and lasting development, and this involves all the youth that are here today.

In order to prepare this successfully, we have to help our young brothers, sisters, and daughters to have education, for education is a way that moves towards peace.”

At the end of the workshop, some recommendations were offered and everyone agreed to forward them to their respective local leaders in the form of a letter of young scouts in the region.

The workshop ended in a mood of satisfaction.

The three recommendations formulated are the following: