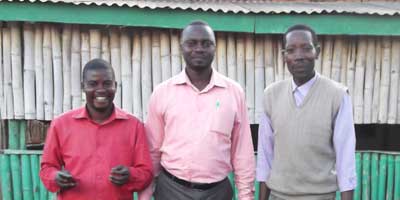 “COFAPRI is needed in this area.... They are not comparable to rapists and others.”  Mr. Cishugi Nyangezi, local traditional chief and member of COFAPRI

Since COFAPRI was set up, the way has never been easy.

The area in which we operate is extremely insecure due to the activities of fighters and the Interahamwe militia. In addition to this endless insecurity due to lack of peace, our activities in this area are not seen in the same light by everyone around us

While working for women and girls empowerment through education and income generating activities, we have faced a variety of challenges. Some are intended forms violence and abuse whose aim is nothing else but to discourage us so we would abandon this noble mission of ours.

Some want to use force under false allegations in order to stop our activities.

On the evening of March 15, 2013, I was informed by telephone that one of our coordinators was arrested again, as previously happened in 2011.

Therefore, I had to make an unplanned visit to the DRC the next morning to see what could be done for the release of the man. I left Kigali early in the morning and reached Bukavu around noon and I travelled to the village where the man was arrested.

I passed by where he was arrested, but they did not allow me to see him.

As for reasons of his arrest, they said he is not a good man and that he is rebelling women against their husbands and girls against their fathers.

On hearing this, I got the point.

I went to look for the traditional chief who joined COFAPRI some time ago. He said he was not informed of the situation, so we went to the police station and we explained to them about COFAPRI and told them that this is not the reason for which a person can be arrested. The chief told them:

“This man does not deserve being detained for the reasons you told us.

I am also a member of this organisation and sometimes, when I have time, I attend their meetings. There is nothing they do against you. They are busy helping our wives, mothers, sisters, and daughters here. Are they new to you?

You can also join them; I think what they are doing here is necessary and we all must be involved in a way or another. “

We were a team of three men and Mr. Cishugi Nyangezi was with us. It is important to remember that he is the first traditional chief to have joined COFAPRI. His intervention was needed for the free release of the coordinator.

This is what he said as we were told the coordinator will be handed to us:

“COFAPRI is needed in this area. They are not opposing people but their beliefs; but what we need to do is to give them opportunity to continue with their activities.

We should not hate them; they are from here and we all know them and we know what they are doing. They are not comparable to rapists and others.”

The chief and the chief of police went behind the prison and when they returned back, the policeman said: “Now you are taking your man with you, but next time you cause trouble, you’ll be sanctioned.”

'When You Arrest Me, You Bless Me'

The coordinator opened the door and he got out; as just he stepped outside (they refused to allow us to take any picture around), he said: 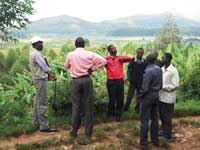 “This is not the way things must work here.

You’d better come and attend one of our meetings so that you can live the truth by listening to what we do.

We do not oppose any man here. We support women and their daughters; we simply want their rights to be respected, we want to see girls being equally treated in their homes like boys.

When you arrest me, you give more courage; you bless me because tomorrow, I will be popular and more women will join COFAPRI.

Anyway, I do not hate you as human beings, but I simply dislike what you are doing in not promoting your daughters, mothers, wives, and sisters here in these villages.

You are my fathers and I am your son. I do thank you as you did what you had to do. Think of how to arrest those who rape these women we are serving and not us who serve them. God bless you.”

The coordinator was informed that men have been accusing him for teaching women how to rebel against their husbands and girls to be impolite towards their parents. He explained his innocence in these words:

“If it is to arrest me for what we are doing, you will arrest the whole system.

All of us are ready to come here and you arrest us, and you wait for our founder and his wife, you also arrest them. We do what we are requested to do by our organisation.

We are women’s rights defenders and I don’t see what is wrong if we tell women to address violence in a non-violent way, to claim for their education and that of their children and respect for their rights.

Your friends are raping women in this area everyday and you’re aware of it, but you never arrest them.

You only arrest us who help these neglected women. This is unfair.”

'My Joy is Immense' - Mother

On the way to the coordinator's home, we met his mother along the way.

She was coming from her field with a bunch of cooking sticks on her head. She threw down her bunch and stared at her son. She could not believe her eyes. She was surprised to meet him.

This is what she said: 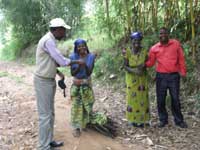 Second from left: prisoner's mother with Mugisho (left). Far right: released prisoner“I don’t know what I can say; my joy is immense. I was not sleeping because of this son of mine.

He has been arrested, but we did not know what he did. I have been asking if he took someone’s things so that he could be arrested like a thief.

He went in the morning to a meeting and when he returned back they arrested him.

We couldn't do anything; we watched them catching our cocks at home and they went with him.

Thank you very much to have come for his release, thank you, thank you.”

COFAPRI is determined to lift village women from ignorance of their rights and involve them in income-generating activities.

This said, we equally help these women to settle their home contentions peacefully and not turn to violence because, in responding to violence with violence, nothing positive will result. The outcome will be more violence and the woman and her daughter are always the victims.

Some abusers never trust in what we are doing and so they do everything possible to hinder us from developing women’s capacities and skills.

Such brutality on COFAPRI members sends off a serious harbinger. This is a way that these violent people test if what we are doing is serious. In the long run, the threat may be largely extended.

This depicts clearly how the DRC cultures hinder women and their daughters; the protectors of these cultures will always hate us if they can’t understand that it is high time for change. People in the 21st century should not behave like those of the Stone Age.

We have to change with time –  and brutality will never bring any change.

We often wonder why some people are keen on arresting non-violent individuals instead of promoting education. Education would help to close the jails of innocent people, so they could learn constructive attitudes and skills that are profitable for everyone.

Women’s rights defenders should not be arrested under false allegations.

This is happening in the DRC because the laws of this country do not fully protect women and girls.

It is worst in remote villages where traditions are the rule and men there support those traditions that infringe women and girls.

It is high time to address discriminatory laws and traditions in the DRC.

Village women in particular, and any other woman in the DRC, should feel free and protected by laws. Women are human beings like anyone in this country.

Arresting COFAPRI members arbitrarily will never resolve the issue because we know that women are invaluable in a family and in the country, and we will always defend and educate their rights and full development.

Rain or Shine, We Will Not Stop Defending Women and Girls

COFAPRI teaches ways to end the abuse, discrimination, and injustice directed to women and girls in the villages.

It should be remembered that the DRC is country that engorges hundreds of cultures that never promote women and girls’ rights. Men are the makers and protectors of those cultures; so anyone who might oppose these discriminatory cultures is automatically considered as an enemy.

It is in this context that COFAPRI has been suffering the conspiracy of such people.

Our animals were plundered in 2011, and this hindered our development efforts.

In 2012, Bahati, my wife, confronted the DRC border officers when they refused her entry into Rwanda as she was returning from meeting our members in the villages. Her camera was taken because she strongly opposed their suggestion of giving them corruption money in order to cross the border while she had all the required papers to travel with our two kids from Rwanda to the DRC, and back again. (We are from DRC but currently we live and work in Rwanda).

May it rain or shine; such incidents will never hinder us from promoting the rights of women and girls of the Democratic Republic of Congo (DRC).

We work based on a philosophy; ie people can die yet their constructive beliefs and opinions will stay alive. This is a noble mission that should involve everyone for a bright future