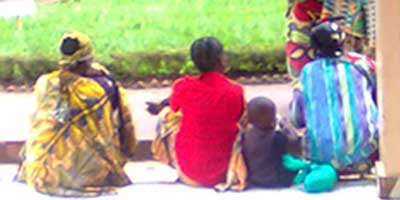 Francine Cibalonza was asleep when the soldiers burst through the door. They took her husband away, then jumped on her like animals, destroying her body and soul forever, leaving her a widow, with six children to provide for and unable to walk for days.

This tragedy unravels on a regular basis in villages like Mulende, in the South Kivu province in eastern Democratic Republic of Congo (DRC), which is described by the UN as “the rape capital of the world.”

Now Francine sits with her hands in her lap, head slightly tilted down and shoulders hunched forward, as if cradling an invisible pain.

But there is determination and courage in her voice.

“After I was raped, I had to leave my village because I was worried about what people would think of me. I knew they would blame me and say that I did it willingly.

So in the beginning, I didn’t tell anyone, and this was hurting me inside.”

'They Consider us Worthless'

Suffering in silence and alone is normal for victims of sexual violence in the DRC.

“They consider us worthless and look at us like dirt.

Every man who sees you wants sex with you as, in their mind, you are now somebody who cannot refuse sex to a man.

A key reason for discrimination is that, in this area, most of the perpetrators of these crimes are Rwandans, the enemies, and having had intimate contact with an enemy inevitably brands the victim with infamy.

Families are also ‘contaminated’ by association.

“People will make their life difficult and the husband will become a joke in the village,” Francine explains.

Not strong enough to face the shame brought upon them, they may end up rejecting their women to restore their dignity in the community. It is cruelly ironic that often the victims accepted to be raped to save their husbands’ and families’ lives, yet they get ostracised for it.

The Stigma of AIDS

Discrimination is even worse when women are seriously injured or contract infectious diseases like AIDS, which is all too common.

In 2008 and 2009, Panzi hospital in Bukavu, South Kivu, which specialises in treating victims of sexual violence, took care of more than 4,000 women and the numbers increased in 2010. A study reported in the journal AIDS in 2010 estimated that as many as 10,000 could be infected with HIV each year as a result of rape.

“In our villages, if you have AIDS people are scared of you; they say you are a prostitute or think you have been bewitched. Many victims never speak up. They don’t get medicines and end up dying in silence.”

The systematic attack on women not only destroys the social fabric of communities, but also their sustenance economies, as in the DRC, women are responsible for as much as 80% of the agricultural labour.

This drastic weakening of the resistance and resilience of entire communities is what makes rape such a powerful weapon of war.

The Root of the Problem

“A culture that does not value women is unfortunately at the root of the problem,” explains Mugisho Ndabuli, who in 2009 set up the initiative Congolese Females Action for Promoting Rights and Development (COFAPRI) with his wife Bahati, to help victims of rape in rural villages, where discrimination is at its worst.

“This is a paternalistic society, where men think they are superior and husbands rape their wives just to show them that they are worth nothing.

Women are considered objects and some men believe that rape is a way to show their masculinity and that a man should never negotiate sex with a woman.”

A 2012 study conducted by the NGOs Sonke Gender Justice and Promundo amongst more than 700 men in eastern DRC, proves the existence of deep misogyny. Nearly a third of men agreed that “sometimes women want to be raped” and that “a man can force a woman to have sex and she may enjoy it”.

A staggering 65% agreed that “women should accept partner violence to keep the family together”.

“To change such attitudes you must work at a local level to teach women about their rights and encourage them to fight discrimination,” Mugisho explains passionately.

“It’s incredible how helpless they can be. The rape kills them once, but being blamed for what was not their choice nor their fault is like killing them a second time.”

Psychological counselling is work of paramount importance for COFAPRI, and men are involved whenever possible. So far, they have had reasonable success in helping victims reconcile with their husbands and families.

All women in the DRC dream of a future when they will be treated like equals.

When they will not have to live in fear, at home or outside.

When education will promote gender equality and there will be laws that support and protect women and that are respected by everyone, with no exception.

Is this just a dream?

For now, their only hope of a future lies in the hands of initiatives like COFAPRI and their commitment to help, despite the dangers and the limited resources. “COFAPRI gave me a second chance,” says Francine proudly.

“Thanks to them I learnt that even if I have a permanent scar on my heart, the rape was not the end of my life. I was a victim once, but I won’t be a victim forever.”

'I learnt to write even before I went to school, which says something about my passion for words, My love for writing has not – at least not yet, turned into a career.

I currently work as an advertising strategic planner in London, where I moved a few years ago from Italy. I also have a passion for Africa, a continent I have read extensively about and which I had the chance to visit only a few times so far.

I am from Italy, a town called Alessandria, in the north-west. 12 years ago I moved to London, where I still live.

I wrote this article for a journalism competition organised by the Guardian newspaper in the UK. I am very interested in international development and I believe that it is really important to raise awareness of the issues people face – like rape in the DRC –  and the wonderful work done by local NGOs like COFAPRI.'