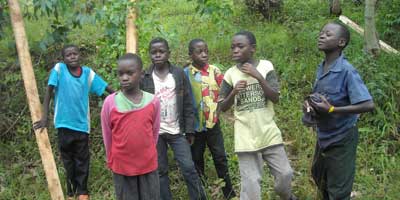 COFAPRI (Congolese Females Action for Promoting Rights and Development) has developed a kind of cultivation on a reduced area around our members’ homes.

The women members are growing tomatoes, onions, egg plants, pepper, etc.,  that they use for cooking, which they had not before. They used to buy spices, but now they have them in their compounds. This way of cultivation is favored by the dung of the pigs and rabbits that they are feeding.

The pigs and the rabbits are also producing, which is giving more hope to our women members.

They are thinking of making a wide farm that will supply meat, skin, and even dung to people in the city, which can give them cash to inject in other projects that are on their agenda – like setting up a sewing centre for women and girls, and taking in charge of the girls of our women members for studies and medical care.

The Boys Devote Their Time to Helping Out

The boy members of COFAPRI are strongly involved in helping, although the majority of them attend school.

These children are between the ages of 10 – 14. They are not forced to do it, but they have understood the teachings we often give them about team work and development of the community.

They expressed their feeling of joy when they help their mothers:

'Our mothers suffer a lot in the home; they seek wood, fetch water and cook food for us. Now we must help them in this activity so that they can get time to do house activities. We love women in COFAPRI as we are one for pushing development ahead'.

They devote some of their time to lend their hands to COFAPRI's project, particularly when they have a day off or during the weekend.

They help to search for sticks that are used to build the cages of rabbits and the pens of pigs.

The boys also help in collecting grass for the rabbits and wash the pigs.

On March 8 every year, there is a great event observed worldwide:  International Women's Day.  Different organizations take part in it by joining Women for Women International's 'Join me on the Bridge'campaign, and this year,  COFAPRI did not miss out.

I personally went to the DRC for the purpose of meeting with the women members of our project. As they are scattered in different villages, not all of them could attend because of the insecurity that was prevailing in the villages, which was due to the presidential elections that had been organized a little before this big event.

Those who managed to attend were very happy to be with us on this day.

There was no bridge in the area, so we stood in a circle, hand in hand, boys and women, as a sign of unity and solidarity. We discussed the issues of war,  domestic violence, and women's rights in the DRC.

Nyota: Truly Committed to Her Sisters

COFAPRI is doing the best it can to support to its growing membership. The members reside in over 10 DRC remote villages, and include women, girls, and men.

The women and girls are the ones who are victims of domestic abuse and discrimination and war violence, like mass rape. Despite this, there are those who manage to find hope and endeavour to help others; one such woman is Nyota, who joined COFAPRI, and whom we introduced in our previous update.  Nyota is truly committed to help her sisters and mothers who are victims of rape in her area, Kavumu.

As we always do for our members, Nyota was given some money to start buying piglets and rabbits to help her village sisters who were victims of gang rape during the wars of the DRC.

Sadly, she was not able to use this money to purchase livestock because she received one girl who was raped, and she was obliged to help her reach the hospital and get treatment.

The girl is named Nzigire Agnes. In addtion, Nyota also received two women battered by their husbands and she had to assist them to get medical care.

As she was just beginning to form groups in her area, no one had up to that time contributed dues for registration and membership. So, the money she was given to purchase animals was used to urgently assist  her sisters, which I liked. She was given 60 US dollars to purchase two piglet, and five rabbits in order to start with.

The girl who was raped told Nyota that, ‘without your assistance I would not have reached the hospital, and if I will die, thank you for everything you will have done for me.’

Nyota promised her that she would return shortly to the hospital and see how her health was improving; Nyota told her that she is sure she will be fine. Currently, Nyota runs into Nzigire Agnes during her campaigns in remote areas.

Agnes had been kept in her home because her parents could not afford to send her to the  hospital. But Nyota took Agnes to the main road on back where she found a lorry that took her to the city center and from there to hospital. Nyota revealed, 'I personally assisted this girl (by transporting her to the main road), which was my personal contribution to her'.

Rape has been a tool that DRC fighters and warriors  use in order to ridicule and bring down women and girls.

The people who commit such odious acts – sometimes they are known – and they are never taken to justice.

The rare cases that had been taken to justice are seated on, meaning that they are never processed; they are delayed in order to discourage the accuser, with the view that the victim will stay home and forget about it. When such a situation happens, the victim feels ridiculed by coming to court everyday without being told about the case development – they're simply told to come next week, next week...and so on. And if the case is followed up to the end, the rapist is released, and the next time, you see him walking around.

In my understanding, he may retaliate on the victim as they are in the same area, or even kill her. It is in this context that you hear that some people have been kidnapped and taken to unknown places.

The wars of DRC are being strongly nurtured by minerals. Even at this hour, there is war between Interahamwe –  the Rwandans who committed genocide in their country and fled to the DRC in 1994 up to today, and the DRC army. The war is taking place around Mwenga where you can get minerals.

The people of that area – particularly the women and girls of that area who are being raped, killed, and mutilated – and the government, are watching.