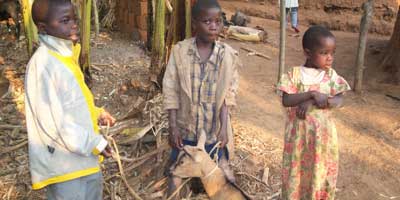 Over the past few months, we have learned from our volunteers in the field that our members are growing in number.

Now, COFAPRI is working with more than 200 members. The majority of them are women and girls, and currently their residence covers 15 villages.

Not Enough Men in COFAPRI

The number of the men who have joined is fewer than ten.

Men are not so committed as women are, but one traditional leader joined last year. We hope that with him, men will understand that they can also join.

He promised us he will use his influence to motivate other men to join.

Pigs and Rabbits Are Now Producing

The other good news we got is that some of our pigs and rabbits are now producing.

Some of our rabbits were looted last year by combatants, but we re-organized to re-purchase others.

Our coordinator in Nyangezi village informed us that the pig he is breeding has produced four piglets. He also told us that rabbits are producing and that  that rabbits are more productive and easy to feed compared to pigs.

The young will be distributed among other members who have not got an animal yet and of  course, the new adherents. The members have been very pleased to see that their efforts are now being productive.

They believe that in a few years, they will be able to get enough funds, from their pigs and rabbits, to sponsor other activities that are on their agenda such as starting a sewing center and paying school fees for their children.

At the start, some of our members were not so motivated to breed animals, but from this encouraging result, they say that now they have seen what was our purpose when we started animals project.

They say feeding pigs is not easy (because they are kept by individual members), but add that they must stick to it since they can now see the outcome.

They even suggested that may be we ought to start a big farm on which they can be working –  each in a form of community work.

Mr Bishikwabo, who represents COFAPRI in Bukavu City, also informed us that they have started breeding ducklings.

They have so far purchased five, and they are growing well. He told us that he is convinced that these ducklings will be producing in a few months.

We are really motivated with such a progress, which shows COFAPRI members are committed to change their future into a bright one, where they will be able to educate their children.

And why not?  They are gaining some scientific education from the money they will have made from their own sweat.

Not only will these pigs, ducks, and rabbits help these women get funds to start other projects on our agenda, but they will also provide people with meat.

Ducks will also produce eggs that can be either sold or eaten.

The dung of pigs is being used to fertilize the field in which vegetables are grown.

Last year, a friend of ours gave us a plot of land of 30m square on which we grew maize. Maize helped us to feed the pigs and was also sold to buy salt for rabbits.

Nyota: A Life Turned Around 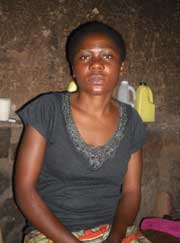 Last month, when Bahati, my wife and co-founder of COFAPRI, was in Bukavu, she met a young woman of about 24 years old, by the name of Nyota.

Nyota told Bahati about the terrible life she was living when a soldier impregnated her at the age of 14.

They married and had two children but he died young and Nyota is now a widow.

In their conversations, Nyoto told Bahati she that has often heard about COFAPRI – but she didn’t know how she could join. Bahati told her everything she needed to know, and now she is our representative in her area, which is Kavumu, some 35 Km from Bukavu.