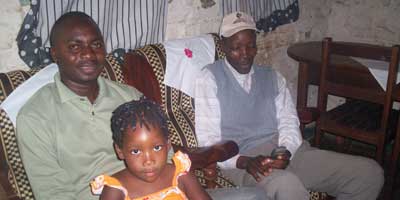 Where Are the Men?

Since COFAPRI has been established in South Kivu, Nyangezi, it has been seeking ways and means to convince men to join in.

Up to now, all its members are only women, girls, and young boys. No man had so far joined us in raising the awareness about domestic and social discrimination and violence.

But recently, Mr. Mugisho had talks with the traditional local leader of Nyangezi, where COFAPRI began its pilot activities with its pioneer members.

The traditional local leader –  by the name of Cishugi Lungere Nyangezi, appreciated what we have done so far, though not much. He revealed us that he had always heard about the activities we are doing with the women of his land, but through rumours. This time, he has been largely informed about COFAPRI.

“I will do everything I can to offer you my confidence and willingness to promote this project -- and help you spread the word throughout my friends; but this is not an easy task because we men are the ones who discriminate these women.”

On hearing this, he encouraged us in what we are doing though he told us that the fight will take a long time and will require more efforts. He believed that the people behind this project are well-motivated and courageous, due to the number of women who are joining and the quick spread of the project.

At the end of this month, we are opening a new site in Mudaka, located in a different commune; that is Kabare. Mudaka is located 20 Kms North Bukavu.

Mr Cishugi did not hide his willingness to work with us as the first adult man and leader. He said that if men do not raise the issue of women in the DRC, who else will do so?

So, for him, COFAPRI has arrived at the right moment to address women's issues.

Abuse Is a Habit Men Learn –  and Can Change

On hearing this, I told him that although we abuse women, this is a habit that we learn, meaning that if we want to change, we can do it because this is matter of an individual’s decision.

So, Mr Cishugi promised he will take his registration on COFAPRI list of members of honours and will pay his contribution in few days.

He even asked us if we had contact with the local Catholic church in place; the Catholic church, because it is the church that the majority of Nyangezi people attend, and it has an imaginable influence in this area – particularly on women and girls.

His reason for such a question was to know whether all the social levels are involved  in and aware of COFAPRI activities.

Since this was a very good idea, we promised him that we will meet them by the end of this month and share ideas with them.