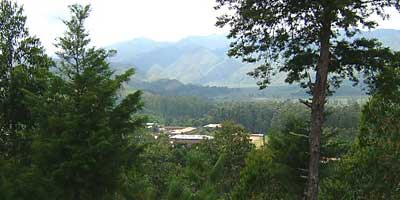 By Mugisho Theophile, Executive Director, COFAPRI - on the ground in DR Congo - September 2011

Recently, I heard that our women's group had been looted, my old school in Mulende Village had been ransacked and that a man had been kidnapped.

Weza High School is the school where I completed my primary and secondary studies until leaving it in 1990 for university. Our grassroots organisation, COFAPRI, is very active in the village.

The school is one of the most popular and growing schools in the region. It is run by the Marist Brothers.  One of the Brothers was kidnapped and held hostage in a terrifying ordeal.

In 1994, when the Rwandan genocide broke out, thousands and thousands of refugees escaped into the Democratic Republic of Congo (DRC).

These refugees included the people who committed genocide in Rwanda, the Interahamwe militia.

In 1996, a liberation war was started by Laurent-Désiré Kabila in Zaire (now known as the Democratic Republic of Congo) in order to oust the dictator, President Mobutu. A war that had devastating effects on the DRC and on Nyangezi province in particular.

Weza School is in Nyangezi, in South Kivu in Eastern DRC.

After the war, staff and pupils at Weza High School decided to flee because the school was looted in 1999 and their were fears for their security and safety.

The school was left empty and was an easy target for looting both by the Interahamwe militia and the local population.
It experienced several such attacks.

Its infrastructures, pigs, cars, tractors, trees, and school tools were stolen or damaged.

The primary school classrooms were recently refurbished with funding from the European Commission, as part of an FMSI project and implemented in collaboration with Amici dei Popoli, an Italian NGO.

The journey to school

Over the years, COFAPRI has been working in Mulende village, helping the women and children. Helping with education fees, hospital fees, and buying livestock.

We work closely with the school, which had always expressed its wish to see a project lead by one its former pupils come to the rescue of Nyangezi women and girls.

Now, 17 years later we are having the same problems.

They came with guns and hidden faces

The children at Weza were on holiday. The school was supposed to have resumed this week.

The bandits carried guns and hid their faces.

These strangers weren't local - they did not speak the local dialect, Mashi.

They tried to speak incorrect Kinyarwanda, the language spoken in Rwanda. This made the Brothers think they were local people masquerading as Interahamwe militia, who originally spoke Kinyarwanda.

One thing for sure was their brutality.

They took a hostage

They kidnapped one of the Marist Brothers at gunpoint and forced him to walk 30 kilometres into the bush.

They told the Marist Brothers the money had to be brought by just one person.

If anyone else came they would kill the hostage.

The ransom was paid and thankfully he is safe and back home.

As the kidnappers returned to their mountain home, they raided our stores.

We had recently bought some more rabbits to distribute to our members. 12 rabbits were stolen.

To our members, who have nothing, this is a huge loss

This may not sound much, but to our members who have nothing, it means a huge amount.

The animals have never been recovered; we lost them all.

This is the second time that COFAPRI has been victim of such acts of theft of its animals.

But we will survive and the school will go on.

COFAPRI will find a way, no matter the winds, to give honour and status to the women and girls of DR Congo.

We implore the government to deploy all the necessary means to halt the insecurity in the eastern DRC so that people can enjoy peace.

The bandits are jobless - there is no work

Even if the government doesn't care about its people at least it should give them peace so that they can make their own way.

The people now involved in the banditry are jobless. Many have studied, but there is no work.

This situation is pushing the youth into acts of barbarity by becoming looters and kidnappers.

Despite all this, COFAPRI still believes that with peace, people can unite and work together in order to rebuild the country.