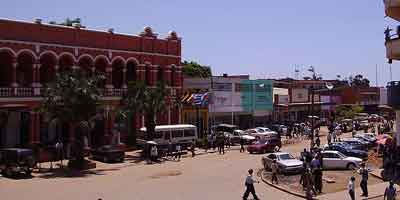 Rich men, though married, sexually spoil young girls who are as young as their granddaughters.

If you visit some snack bars and nightclubs where rich people often spend their evening’s leisure sipping on glasses of beer, you can hear them repeating their motto:

“ I have money, I can get as many girls as I want; they need money, so I give it to them and they give me sex”.

This is what sugar daddies believe in.

Some girls spend their times in cabarets where they are sure to be seen by sugar daddies who want to enjoy life with those girls. These girls are picking the guys they want to have sex with nicely.

Those guys who have money are freely offered sex without a fuss.

To this issue, the young guys have become annoyed and today they are putting pressure on the girls, so that they may receive what they want from them.

Women today are known as two quarts: you only have to buy them two beers and you are guaranteed sex for the whole night, nonstop.

A woman is making a fool out of a boy because she knows if she says “no” after you have spent so much on her, you have to put her under pressure until she accepts. And boys and men are willing to spend money on her – provided he is given what he has been dreaming about day and night.

Actually, girls freely give sex to men who have money and resist those who do not have it.

In fact, this means that the rest of the men, who do not have money to offer to girls, 'have to' use pressure on girls to have sex.

Low-income men use pressure and abuse to have sex

Such an assumption reveals that women are exposed to sexual violence due to the fact that young men believe when women resist them for having sex is because they have no money to spend on them.

Low-income young men frequently express frustration over the fact that young women are largely attracted to those older men with incomes who compete with young men and seduce their girlfriends.

Young men also believe that it is not easy to negotiate sex with girls because they do not have money to give to girls while the girls are receiving money from old men for having sex with them.

And because of this situation, young men put pressure on girls when they negotiate sex with them.

Young people in the Great Lakes Region of Africa find that both gift giving and coercion are merely reported to be common in sexual relationships.

Some unemployed men or schoolboys complain that they find it difficult to secure a single girlfriend because sugar daddies are so well-positioned financially to attract more girls. As a matter of fact, poor men frequently complain about the difficulties they have in attracting girlfriends and women in this part of the world.

We can still maintain that in societies that are characterised by social inequalities, these sugar daddies are men who are naturally older than the girls they trap for sex, who are sometimes younger than their own daughters or even of the age of their granddaughters.

These men with money procure the sexual services of young girls in exchange for gifts or spending money.

The sugar daddy has become a real social phenomenon where younger girls offer sexual services to older men in exchange for gifts.

This is facilitated by the older men's higher socio-economic status which encourages multi-partner behaviour and an increased risk to contracting sexually transmitted diseases (STD) –  including the killing HIV/AIDS.

We can still argue that the shifting sexual arrangements, in which young women become involved in relationships with older men, have implications for HIV risk for both young women and their peer males.

Indeed, sometimes this is because gifts are supposed to convey sexual privilege, a privilege that is sometimes assumed forcibly.

The evidence suggests that gifts are likely to reduce the ability of girls to demand condom use, and can also be associated with sexual influence, an exchange that somehow entitles one partner to physical and sexual rights to the other’s body.

Gifts play an important role in shaping the sexual terms of a relationship and may have destructive effects on the ability of women - and sometimes of men - to express their preferences for the type of sexual activity, its initiation, or the use of safe practices when engaging in sex.

Young men of the GLR –  particularly low-income ones, are constantly at risk of losing face because older men and men with money are more likely to attract partners. Some men may use other strategies to compensate for this lack of power.

Gifts are often accepted implicitly and sometimes explicitly as a sign of imminent sex.

The expectations might be that gifts are given and received by partners early in a relationship as this would mean the right to demand sex. Sex is recognised as a driving force for males to engage in relationships, and money as one of the main reasons for women and girls to create and strengthen relationships.

It is believed that when a man spends money on a woman and she refuses to have sex with him, he has to put pressure on her until she accepts.

Sex does not occur without economic exchange of some form; if a man had spent a lot of money to entertain the woman, then he would be aggrieved if she did not consent to sex.

Girls who have financial problems exchange sex for money to buy the basics such as soap and food, and some even use this money to pay for their education and feed their families, including their parents.

Relationships are constructed in nature, with the girls expected to be available in exchange for presents of money, clothes, and food.

The former behaviour is more frequent in rural areas where economic circumstances have severely limited the livelihood opportunities of women and girls.

The latter behaviour is more characteristic of semi-urban areas where fashionable consumer goods are highly socially valued; here young women are more likely to assert their agency and exercise greater freedom of movement, both of which facilitate relationships with men –  including the so-called sponsors.

In the period of dating and courtship between young people, exchanges of gifts are normal and are often expected.