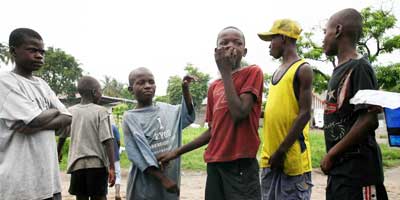 Children accused of sorcery often end up on the street

Growing Accusations and Abuse of Children as Wizards & Witches

Orphans, albinos, and the disabled targeted

Occult practices are common in most rural and urban areaas in the Democratic Republic of Congo (DRC).

The cultures of the DRC contain a lot of traditions and legends. Some of them are constructive but many more are purely destructive.

In this context, the latter cause gross human rights infringements, including victimising children in their innocence, of sorcery.

Today, the DRC is experiencing a climb in false accusations of children who are claimed to be wizards and witches.

The ones who constitute most of the victims of such false accusations have always been orphans, albinos, and the disabled.

Petrol poured in eyes and ears

Barbaric and shameful exorcisms have often been performed using petrol which is poured in the eyes and ears of these defenceless children.

In other cases, children are forced to drink unknown substances in order to cleanse them of the so-called possession.

Furthermore, one of the crucial mission of churches remains to help local leaders promote human rights and the grassroots to learn about their rights.

However, in the DRC we learn how some churches are supporting allegations of child witchcraft.

They abuse the abandoned children who face accusations of sorcery and witchcraft due to parental neglect, birth defects and disability.

Tragically, some pastors attempt exorcisms in which they place children's hands in near-boiling water to purge what they call bad spirits.

The outcome of this is that these unfortunate children get severe burns and sometime die.

Let these children be understood via their innocence.

In the past, this practice was mainly geared toward females, i.e women and girls and the elderly. This depicted a kind of segregation that is commonplace on women and girls on the African continent in general.

Nowadays the majority – that is 75% - of the children who are accused of sorcery and witchcraft are male.

According to UNICEF, there exist convincing details that thousands of children – mostly boys aged between 8 and 15 - have been attacked, beaten,or even killed simply because they are thought to practice either sorcery or witchcraft.

Accused children end up on the street

When such an odious situation occurs in a family, it often causes children to run out from the home and seek shelter elsewhere;  many others become street children because they feel menaced in their own homes –  where they should get full and sustainable protection from their parents and relatives.

Exorcisms: not just a local phenomenon

It should be noted that this not just a local phenomenon either, since several nations throughout Africa have been believing in it.

In addition to the DRC, countries like Angola, Benin, Central African Republic and Nigeria are also responsible for causing fear about children in this context.

These above-mentioned nations should know that this is the destruction of the youth of their respective nations.

They should rather protect and educate them, instead of destroying their lives, since the youth are the future pillars of each of these countries.

If we consider the above details, we note that the problem is growing increasingly worse in the DRC.

This because the DRC has one of the world's fastest growing populations. About 47 percent of its huge population of about 66,000,000 is at or below age 15.

A 2005 Save the Children survey concluded that an estimate of almost 2,000 children in the urban area of Kinshasa alone were accused of sorcery, and that at least another 10,000 children nationwide may have also been victims.

In this vein, HIV/AIDS puts many children at risk for abandonment.

Such alarming figures are due to the successive wars that imperiled the country for more than 16 years.

In this period, women, girls were massively raped and others were held as sex slaves by people whose health state was not known to these women and girls. This is what explains the high prevalence of HIV/AIDS in this part of Africa.

Other Factors That Contribute to Sorcery Accusations

As for the factors that contribute to the recent augmentation in accusations against these already vulnerable children, these are chiefly poverty, urbanization, domestic conflict and the growing economic burden.

As per a report by the Executive Director of the United Nations Children’s Fund, Ann M. Veneman, children are the innocent victims of manmade and natural disasters.

Children experience untold barbarity in all corners of the country –  and many parts of the world - with some countries blaming disasters on child sorcery.

From the mudslides and floods in the Philippines, the earthquake in Haiti, and the interminable consecutive wars of the eastern DRC, man-made acts of abduction, trafficking and forced entry into militia, and rebellions in various parts of the world, there is a severe lack of law enforcement and women and children lose their rights.

This is the reason why some countries do not recognize women and children as anything more than chattel that can be bought and sold; in other words, women are like objects that are meant to satisfy violent men’s unique sexual lust –  and nothing more. This sometimes goes further and women and their daughters are considered as sexual slaves.

This is inhumane behaviour though widespread in some places.

Accusing Children of Witchcraft Infringes on Their Rights

In any country where children are accused of witchcraft, the government in conjunction with churches should combat these traditions as they are an impediment to human rights.

Accusing children of sorcery and witchcraft is a major infringement on the rights of the child. In countries where justice stands still, this is a serious example of lack of legal protection for children.

The UN, governments, and churches of countries should work hand in hand to root out these social evils for bettering the future of children.

They deserve to enjoy their rights, just like you and me.

In Kinshasa, the capital city of the DRC, there are over 28,000 Evangelical Churches practising exorcism. This number has more than doubled in the last decade.

That is more churches practising excorcism than there are schools in the city.

It is a highly lucrative business.

In 2009, the government of the DRC outlawed accusations of sorcery. It is illegal to accuse someone of sorcery or witchcraft in the DRC and the offence carries a penalty of a three-year prison sentence.

However, the law is rarely implemented.