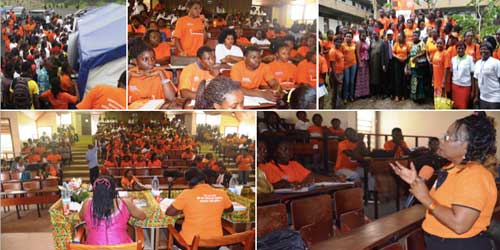 The United Nations Cameroon through UN Women in collaboration with Women for a Change Cameroon #OrangeTheCampus together with 350 persons in "Ensuring Gender Equality, Making Education Safe for all".

Dear friends, supporters and partners of Women for a Change Cameroon (WFAC) , it's hard to believe that WFAC is already 6 years old.

Looking back and counting our accomplishments and impact of our work on the lives of youth – especially women and girls, I feel more than proud and humbled at the number of lives touched, empowered, and saved.

Since 2009, WFAC has connected around 100 grassroots voices to policy markers, platforms, and networks for positive change, and supported 20 adolescent girls and boys with life skills and trainings as allies and agents against violence on women and girls! Last but not the least, Wfac has empowered about 50 women and girls on SRHR advocacy and leadership development!

The truth is, all these would not have been possible if not for the generous support and contributions from supporters and friends like you, including family members, volunteers and staff! I wish to also indicate here that your comments and 'Likes' on our Facebook Page, Twitter/@Wfaccmr and Instagram/@Wfaccmr, which have continued to be of great inspiration to all!

To mark our 6th anniversary, below are some highlights on What WFAC has done in six years.

What WFAC means to staff, friends and supporters

"It has been a wonderful time with Wfac, seeing wfacAt6 has been so inspirational, motivational, and a life changing opportunity and above all impacting in my leadership values that will last forever. Thank you wfac for giving me the skills and making me to know my rights as a woman and as a young girl. I am forever grateful to Wfac! Happy birthday Wfac.

The sky is not our limit but just our stating point."

"Community Outreach and Capacity Building are two separable activities. But an Impacting and sustainable organisation is that which incorporates both in its respective scheme of activities/operations.

I have seen this trend in Wfac Cameroon, most especially the focus on People Development in both Internal and during Community Outreach activities. This is essential in enabling the achievement of desired impact. Among many others, this is one of the key traits used by Wfac to stay coherent to its objectives and impacting the community."

Congratulations on your 6th Anniversary and each member directly or indirectly linked to Wfac as a staff, a sponsor, a volunteer should be proud on this occasion. The work you undertake is one that is at the heart of building a society, community and a country for today and the future.

I recall a member of Wfac telling me about her experience of interacting with a young girl of 13 years old the same age as my second daughter who has been raped and hospitalised but unfortunately passed away a few days after the Wfac member's visit. This touching story and the pains it brings is what Wfac is working to prevent."

Deputy Representative,UNFPA Cameroon ( @UNFPACameroon)
This message is sent in a private capacity and not that of UNFPA.