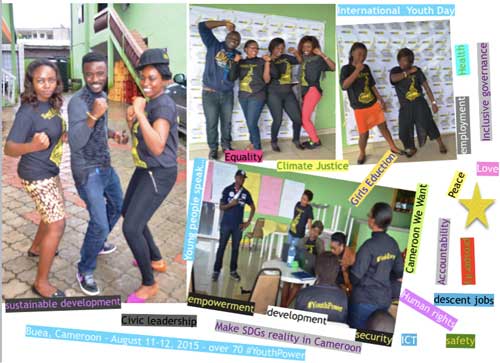 Young people hold the future and denying them their rights to a meaningful civic engagement – especially in deciding on matters that directly affects their lives and future, is not only a violation to their human rights but has a strong negative impact to national growth and development.

It is also imperative to say that it is a failure from the government to ensure and promote democratic practices and enhancement of the future leaders and workforce.

Research estimates that 64% of Cameroon’s population are young people under 30 years old. This is an essential workforce to drive economic growth and development. However, in most national debates, young people’s voices are hardly ever heard and counted. This includes policies, decisions and laws that directly impacts and influence their lives and development.

Day I: Divisiti Nyte: - exploring personal views and understanding around Youth, Power... civic engagement and leadership.To commemorate the International Youth Day 2015, Women for a Change (WFAC) Cameroon, in collaboration with Hope for the Needy Association (HOFNA) Cameroon, Iam15 Action-2015 Youth Ambassadors held a two-day Interactive and Inter-generational Solidarity Meeting to celebrate youth activism, participation and engagement in the post-2015 agenda and its discourse in Cameroon. The meeting was held with young people between the ages of 15-35 years, under the theme, “Youth Power. It’s down to Us!”

For the previous two days or more, WFAC was engaged in the post-2015 development process, from the Africa Regional Conferences in Addis, Ethiopia, to the intergovernmental negotiations in New York, U.S.A to ensure that the voices of women and youth is heard in this fora.

WFAC Cameroon has held over 50 community actions initiatives, including campaigns at the grassroots, advocacy meetings, inter-generational dialogues, all geared towards advancing youth participation and involvement in the post-2015 agenda. It has also worked with diverse groups and individuals, including 15 year-old students, school dropouts, young professionals, women, and youth groups in mobilising, organising, and popularising the post-2015 process, ensuring that young people's voices, especially those of adolescent girls are heard and counted in this global agenda.

To strategically give a voice to young people in Cameroon, in June 2013, WFAC Cameroon conducted for the first time in Fako Division, in the southwest region, the “My World Survey”, reaching out to about 1,500 young people – women and men under 35 years of age with the questionnaires, encouraging them to add their voices by voting for their most priorities in the ‘My World’ survey.

In 2014, WFAC led a series of robust national campaigns and advocacy meetings with some 22 youth leaders and activists representing 10 youth-led and women-led organisations across the country, calling on the government of Cameroon and policy makers to position and prioritise human rights issues at the core of the post-2015 sustainable development agenda.

For this year of 2015, all WFAC Cameroon members have been extremely active and busy with limited rest; this is coupled by the fact that we are just a small team of three. Nevertheless, our team size did not hinder our effective engagement to seize this pivotal moment to influence change, and ensure we choose the future we want for the world and for that matter Cameroon by 2030!

As an active member of the Action2015 campaign, as well as the Coordinator for the National Coalition of Action2015 Cameroon, it’s been a great honour for WFAC and I to work with the youth in this country – especially the 15 year-old ambassadors, youth champions, community service organisations (CSOs) such as HOFNA, to advocate for government’s support for an inclusive and ambitious evidence-based post-2015 development agenda.

Central to all our work is that urge to meaningfully engage and participate in designing the future we want for ourselves and our future.

On International Youth Day, August 12th, we celebrated our activism, participation and involvement in the post 2015 process. Let’s continue every day to build on more momentum, as well as using our Youth Power to galvanize and with positive pressure for an integrated and inclusive approach in designing and implementing the national action plan of the global sustainable development agenda over the next 15 years and putting the advancement and development of young people at the forefront.

This is just the beginning of a long walk for a just and safe world for all, women, and men!