Ending Violence Against Women & Girls - the New Sound-bite for Patriarchs 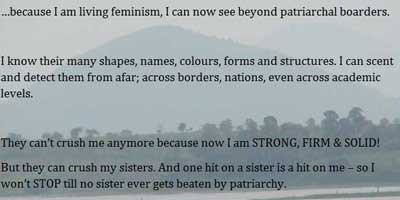 Even patriarchs are now speak of ending violence against women and girls (VAWG) when in reality, it is just a guise to control women.

The words VAWG seem to me as the new mantra everyone is talking about, particularly in Cameroon, from top authorities to clergy to local grassroots elites.

At occasions, workshops, seminars, I hear them recite – or should I say, report local findings on VAWg. For example, they too speak of 36% of women in Cameroon having experienced one or more forms of violence, over 55% of women as of age 15 having at least experienced physical violence from a man, and about 24% of adolescents girls having had their breast ironed, and so on.

Nowadays, in schools, universities, churches, and community gatherings, you can also hear patriarchs preach about ending VAWG, how womens' and girls' bodies must be protected, the need to invest in girls’ education, end child brides and forced marriages, etc.

So why do patriarchs suddenly talk about VAWG with certain degree of ‘comfort’? It’s been over 60 years after UDHR (Universal Declaration of Human Rights) was conceived, almost three decades since the Mexico Conference on Women and CEDAW (Convention to Eliminate All Forms of Discrimnation Against Women) was established, two decades or more since Beijing Conference and ICPD (International Conference on Population and Development); now to 15 years for the MDGs (Milennium Development Goals).

Some of these struggles are even older than many of us, today’s new generation of feminist [women] activists. Yet, achieving gender justice, women’s rights, and empowerment has barely been realized. There still laws and barriers impeding women from fully expressing their sexuality or gaining complete economic empowerment, and social freedom.

With the huge awareness raised on VAWG, patriarchs have also mastered the vocabularies, too! And can now use it at their convenience – again, for power and authority.

Women human rights have become a divisible item, which patriarchs can choose and select one right from another, and when, where it must be prioritized.

For instance, Cameroonian patriarchs are holding gatherings and press conferences to brainwash, victim-blame and shame women and girls, by telling women, and making them believe they caused and provoked sexual violence on themselves by dressing ‘inappropriately’ or wearing facial makeup, jewelries like foot rings, and anklets.

As a result, on November 19, 2013, four Cameroon ministers – including the minister of women’s empowerment, held a press conference in which they stated that girls ‘indecent’ dressing was amongst the main causes for the prevalence of VAWG in the country, the need for law enforcement to police women and girls’ dressing.

A new responsibility, the police were glad to execute without a wage.

The question therefore is what could have made the minister for women’s empowerment believe in such patriarchal lies?

The answer is simple. We are all products of patriarchy. Born and bred in patriarchy. We grow up hearing these lies, believing and internalizing it, and when we gain authority, we at times unconsciously exercise in their favour.

It changes forms, colour, and structure every second it has the opportunity, so to protect masculinity while policing feminism. The case of Cameroon and many others even shows how the most educated women elites sometimes suffer from internalized patriarchy and misogyny.

The reason I say, VAWG is now the new mantra for patriarchs to use against feminist struggle.

Everyone talks about ending VAWG, but do they sincerely understand the depth of violence against women and girls?

Do they feel women’s pains and constant suffering? Why 60 years, 30 years after, is VAWG still very pervasive?

These are of the many questions I often ask myself.

New Generation Needs to be Vigilant

So, as the new generation of women born during feminists struggle and are living feminism, we must be extremely vigilant. Ending VAWG might be the new mantra for patriarchs, but to us, it has always been and will always be a daily meditation.

And we must be free from patriarchy. Our children must live a fulfilling and respectable life at all times.

These are some of the words I tell myself when I am trapped: because I am living feminism, I can now see beyond patriarchal borders.

I know their many shapes, names, colours, forms, and structures. I can scent and detect them from afar – across borders, nations, even across academic levels.

They can’t crush me anymore because now I am STRONG, FIRM & SOLID!

But they can crush my sisters. And one hit on a sister is a hit on me – so I won’t STOP till no sister, no one ever gets beaten by patriarchy.