Policemen and Street Harassment in Cameroon 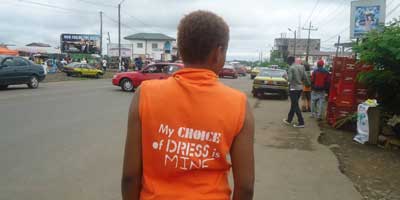 WFAC Founder - Zoneziwoh Mbondgulo. WFAC & friends joined #UNiTE #OrangeDay through a 1 mile #SafeCities Walk to say No to all forms of #harassment on girls/women - particularly #Buea police harassment and detention of our girls/women dressed in short clothes.

Tuesday the 26th November was yet another of the many days we have being facing street harassment by men. After having a tiring day of doing what we are most passionate about, and with all the exhaustion coming from moving around in the scorching sun, my friend and I still could not go home because we had some unfinished business – and badly needed to finish up with what we had planned to do that day.

Around the Human Rights office, on the other side of the road, were two policemen – one standing and the other on a motorbike. I didn’t pay much heed as they called for my friend’s attention.

But I realized that much more was going on when my friend twisted her face in denial to respond to their call. I turned and looked at the two policemen. My friend suggested I don’t look at them and that we continue moving.

We didn’t really know what to do or think at that moment because of the dress code policing that is going on.

As we continued moving forward, the policeman who was standing crossed the road to meet us, while the other one continued moving forward on his bike so he could catch up with us. We never stopped moving when the policeman following us starting talking. Speaking in French, he told us that he and his friend were new in Buea and did not really know the town that well. He said they would love to spend some time with us and asked for my friend’s number.

Despite the fact that we showed no interest in continuing the discussion, the policeman kept following us, trying to persuade us to give our phone numbers, while his friend across the road continued following us on his bike. My friend tactfully refused to give her number. The policeman suddenly shifted his interest from my friend to me and said I was the one he wanted. I also tactfully made excuses and denied giving my number. We were in front of the health center when he said that his friend on the bike could take us to Molyko since we said we lived far.

These men just did not want to leave us alone.

It is just one of the several incidents when policemen who were on patrol have shifted their attention from their job to harassing young women. Sometimes one is forced to be polite despite loathing the harassment and harassers, only because of their fear of being harmed. We are talking here about policemen who could physically abuse a woman and then make excuses and lie that she caused it herself, or they create some other motive, and get away with their crime.

It is a good thing that we succeeded to manage that situation without things getting out of control. But not every day one might be that lucky.

Not every woman is always that lucky.