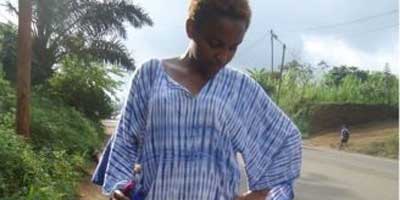 November 15, 2013 WFAC Director and founder, Zoneziwoh, was illegally detained by a police man for closed to 30 minutes for dressing in a 'short' skirt.

"They went on and on to lecture me on how ‘dressing in short’ [skirt] is provocative and when a girl comes to their office and reports a rape case, they ask how she was dressed and, 'If she was dressed in a provocative manner, she will be punished.'" 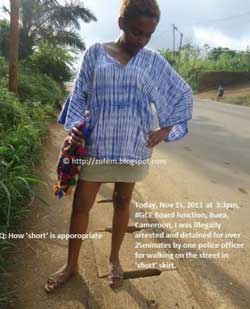 Illegal Police Detention and Arbitrary Arrest of Girls and Young women in Buea - based on their dress, needs some serious TALK - I think we need a SITdown chat.

On November 15th, 2013, at 3:30pm, as I walked home, one traffic control policeman stopped me and asked, I presented my ID card to him.

When I asked him why he needed to see my ID, he responded so angrily that ‘how dare I question him’? So I told him if he can’t tell me why he needs my ID. I think I have no business with him and would be glad if he gets out of my way. Secondly, he is alone which is illegal for one Cameroon officer to do any control of any sort alone.

Having said that, he then told me that he needed my ID to file a complaint against me for walking on the street in ‘short’ skirt. “And it is prohibited by law and a criminal offense”, hee said.

I gave him my ID which he took and pocketed it. Then called his colleague on telephone to come arrest me and take me to the main police cell.
While waiting for his colleague to come pick me up, he asked me how I felt dressed in 'short'. I told him that I felt more than happy.

“Happy” he asked nodding his head.

Ten minutes later, his colleague arrived from a public taxi, feeling so bossy and in control.

Together, they stated telling me that I should know that today is a Friday and they don’t bail people over the weekend so I will have to spend the weekend at the police cell and from there I will be taken to court and be judged for ‘public indecency’. And if I don’t know, this is a criminal offense punishable by the law…. They went on and on to lecture me on how ‘dressing in short’ is provocative and when a girl comes to their office and reports a rape case, they ask how she was dressed and, "If she was dressed in a provocative manner, she will be punished.”

“Seriously” I exclaimed, “Then we are finished!”

After they had spoken and said how I should be ready to receive a severe sanction, etc…

I asked them if they had a copy of this criminal law or public dressing code with them at that moment, etc. or how do they define ‘short’ or so called ‘public indecency’?

They told me how it is in their office. Then I told them, "So you see! What ‘short’ is short?"

Again, they got so furious that I had the guts to question them…or speak.

“In fact, I think you need to be shut up for a while…your mouth runs too much,” one of them said, “Come here! We are taking a taxi to the police station, where you will be photographed in what you are wearing and be taken to court on Monday. And by the way – know you will be the one to pay for our transportation to the police office in Molyko...”

“I don’t have a franc on me – no money!” I told them. And speaking of taxi, I asked: “Where is the police van? When did police begin to arrest police and transport them by public transport…?”

They didn’t respond my question. Instead, they left my sight for a while – went and discussed among themselves and then came and gave back my ID. And told me that I shouldn’t "dress like that again”

I took my ID and still reminded them that I will get back to them at their office – probably they will be of good help because I have come to their office on several occasions just to have a copy of this so-called ‘indecent’ dress text, but have never been shown any.