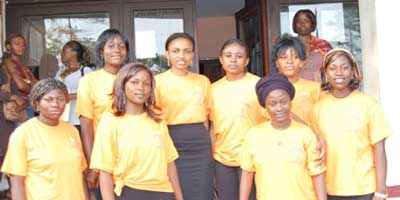 WFAC Cameroon was formally recognised by the University of Buea, as a campus-based association, on November 26th 2009.

WFAC Cameroon is based at the University of Buea.

The University of Buea was born in 1993 following wide-ranging university reforms in Cameroon and now has a student population of over 12,000.

Buea (French: Buéa) is the capital of the Southwest Region of Cameroon. The town is located on the eastern slopes of Mount Cameroon and has a population of 90,088 (at the 2005 Census).

This situation particularly impacts on the lives of women and children, with issues such as sexual abuse and violence, child trafficking, poor maternal health and mortality prevalence, HIV/AIDs, harassment, stigmatization and discrimination, and poor representation of women in leadership.

Buea was the colonial capital of the German Kamerun from 1901 to 1919, and the capital of the Southern Cameroons from 1949 until 1961. The German colonial administration in Buea was temporarily suspended during the eruption of Mount Cameroon from 28 April – June 1909.

Originally, Buea's population consisted mainly of the Bakweri people. However, due to its position as a university town and the regional capital, there are a significant number of other ethnic groups.

Because of its location at the foot of Mount Cameroon, the climate in Buea tends to be humid, with the neighbourhoods at higher elevations enjoying cooler temperatures while the lower neighbourhoods experience a hotter climate. Extended periods of rainfall, characterized by incessant drizzle, which can last for weeks, are common during the rainy season as are damp fogs, rolling off the mountain into the town below.