Mama Commy: 'I Refused to Die; I Lived to Tell' 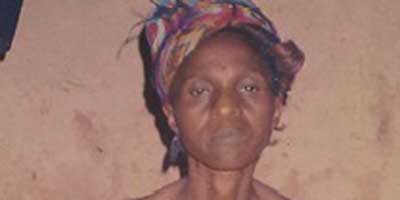 Madam Njitie Charlotte, Tells Her Story - Second in the Know Her Story Series by Zoneziwoh

“I need my story to be heard. My children need to hear my story and not be told who their mama was”...

That was how Madam Njitie Charlotte, commonly called Mama Commy, kicked off this interview while inviting me to sit in her living room.

Before I could set up the recorder –  in a very strong emotion, Charlotte raises her two hands at the level of her chest, saying:

“There are a lot of people who have heard my story and are inspired by it. I want my story to be heard in the most remote of areas.

Where Persons Living with HIV/AIDs (PLWHA) are still discriminated [against] and stigmatized, I want many lives transformed. I want people to know that when you are HIV, you are just like any other human being.”

Madam Njitie Commy Charlotte, age 37, was born in Konda Village in the North West region of Cameroon. She attended Presbyterian Primary School Konda and Government Bilingual High School Mbingwe, where she obtained her First School Leaving Certificate (FSLC) and the General Certificate of Education Ordinary and Advanced Levels (GCE O & A levels) in 1991 and 1993 respectively.

Later, she went to the Government Teachers Training College (GTTC) WumShe graduated in 2004 as a certified Nursery School Teacher; since then, she has taught in several schools, like—Les Perroqtte in Yaoundé, Government Primary School Kompina.

In the year 2004, the point of where Madam Njitie begins her narration – punctuated with smiles, emotions and reflections, though very little emphasis about her childhood experience, she tells it all – how she fought the stigma and discrimination living with HIV.

She tells how she got the motivation to open an orphanage, Father’s House, a home for some 11 young girls and 9 boys, as well as the association; Faith-Building Association, a not-for-profit, self-helped group of persons living with HIV/AIDs (PLWHA), she founded in 2006.

“My son was hospitalized in the Foundation Chantal Biya in Yaoundé - Cameroon, because he had a kind of children’s cancer.” Njitie said, having spent almost a year in that hospital.

“One day, I felt down and collapsed.”

“I was moved from one hospital to another. Finally, I was moved to my village in Konda so that if I die there it would be easy for my burial.  Two to three weeks later, having been placed on herbs treatment, I started to recover.”

So, at the request of an uncle, she recalls:

“I was moved back to Muyuka, since he suspected that maybe I was poisoned while in Yaoundé.

While here in Muyuka, I felt seriously sick again. And was carried to the general hospital in Limbe, where I was tested HIV positive.”

My husband, who really carried me to the hospital –  having heard I was identified like that, abandoned me, and went away with our children.”

She recalls that the problem was not only the HIV; with a heavy voice she says:

“The problem was that, I had only two white blood cells remaining in me. Two, two CD4! I had nearly all other opportunistic infections like cough, diarrhea, vomiting, andrashes all over the body.”

Unable to pay for the hospital bills, Njitie said;

“My mum removed me from the Limbe Hospital back to Muyuka, where I lived with her for some years in a rented small old single-room house, build out of planks.

One day, as God would do things, there came this young Holland lady, by name Syske Klumpe, an intern with the association, RUWDEC (Rural Women’s Development Centre), based in Buea. Klumpe was just passing by, then discovered me lying under a tree by our little plank house.

She came up to me, greeted me, interviewed me and as I told her everything about myself, she wept.

However, Klumpe promised me that there was little she could personally do to assist me, but that she can help share my story to her parents, given that I accept she takes pictures of me.

Maybe, Klumpe said, her parents can send her some assistance, and only with that can she help me.

When Klumpe said so, I responded, 'Even if you want me to undress, after all, who am I? I am just waiting for my last day.'

So Klumpe took pictures of me. That day, I was dressed in loin-cloth wrapped round my chest; all of my upper body exposed.

Four days after, Klumpe snapped [photos of] me, I saw her and she told me that her parents responded positively. That her parents have sent her money which she has put under the Klumpe family's project – which, she used to weekly transport me from Muyuka to Buea, and then general hospital at Limbe.

This lasted for several months.

And each time, we went to the hospital, doctors prescribed new tests. Finally, after a long time of trying to treat the opportunistic infections, I was placed on the anti-retroviral by Doctor  Atanga, who was then the regional director at the General Hospital Buea, now at the Regional Technical Group (RTG).

When I was placed on treatment, it was just like a miracle that happened.

Immediately, I started taking the drugs accompanied with other vitamins; I started recovering very fast and after about two weeks, Ms. Klumpe came to visit me here in Muyuka: I remember sitting on the floor; eating cocoyam and vegetables when Klumpe also joined me on the floor to eat with me in the same plate.

I recall saying: 'No! How can you be sharing with me?'

But she said: 'Why not! You are a normal human being like me. It’s just that you are sick.' In addition, Klumpe added: 'Have I not been associating with you?'

Even at that I wasn’t sure her eating with me was safe. I felt she may get infected. But she made me to understand that it wasn’t possible. Still, I tried convincing her –  I dished her own food; she refused, and insisted eating with me. While we ate, she told me that she wants to go back to her country. I started weeping and she asked me to stop weeping.

In fact, she made me understand that she just extended her stay here in Cameroon because of me.

'And at least, I was getting better.' Klumpe said.  Moreover, she later told me that, the rest of the money that her family sent to her is still there, she does not want to take it back.

'What will I want to do with that money?' she asked – 'or would I want to open a business since I no longer have the strength to work at the farm as well as to go to her teaching job…' Klumpe proposed.

Immediately. Klumpe asked me what I wanted to do with the money? All that came to mind was how my children have been taken away from me. The notion they have about me.  And there was little I could do to share my love with them, and to tell them how I have been made powerless and voiceless. Like me, many other women living with HIV/AIDs and children are definitely having a similar experience.

Again, I pondered about the fate of my children, the conditions under which they were living…maybe like orphans; I said [this] to Klumpe. At such, I told Klumpe that it would be my wish to have the rest of the money, be used to support orphans and any other PLWHA."

A Brave Choice: to Help Others

"Klumpe was amazed at my brave choice. So, she took me to Buea that same day, opened an account, and transferred the rest of the  money (something around 1,500 USD) to me.

And that is how the first organization, Faith Building Association (FABASSO) for PLWHA began.  When FABASSO was created, I had nowhere to go. I had no idea on how to run or manage an organization. I didn't know how to go about it.

So one day, the same year FABASSO was established – that was 2006, I was in Buea, and was wandering, after collecting my drugs; I came in contact with the sign board of Reach Out NGO. Immediately, I saw the sign board; I knew that I can seek advice from them.

So I went in, and introduced myself; explained everything, how I was looking for an organization to direct me on what to do. They told me that their madam was not in. They just gave me the number that I should call later on.

A couple of days later, when Madam Omar Esther, the executive director of REACH OUT NGO visited Muyuka, I was in Buea with one of the orphans in the hospital. She waited for me and later left.  She came again the second time in my absence.

The third time, we accidentally met in a seminar in Limbe. That same day after the seminar session, I and Omar had a one-on-one conversation, where she oriented me and promised to follow me up –  which she continues to do till date.

Through that, I was able to form a strong group – a group that went up to about 60 or 70 members living with HIV/AIDS.”

I Will Move on Foot All Over...

“I will move on foot all over the small villages around Muyuka. I will trek under the sun, rain to find persons who are sick, [and] orphans –  so that at least everybody should come together and get some support.

Each day I will pray, talk to God.  So, one day I was crying so much in my prayer. I told Jesus, 'I want to see you.'  Suddenly, I saw this vision where Jesus came in the form of lightening. The moment I saw it, fear caught me, later I regained myself and said, '

Father – thank you!  I am sick and unable to move with strength. Give my health back so that I can work for you forever. Gives me one chance again on earth, for the rest of my life I will work for the glory of Your name.'

Then, I saw a hand brought a long book like that, saying that today we have to sign a covenant.

So, I signed my own part that from that day I will work for the glory of HIS name. And if I disappoint HIM, HE takes away my life. I saw only the hand signing; I did not even see the person's face. So from there, I surrendered my life –  I surrendered everything after that covenant.

I said, I am going to work for Jesus.”

While Njitie was recovering, her husband – a soldier, came back, and reconciled, but wanted Njitie to stop her humanitarian services, to stop raising awareness about HIV/AIDs, as well as stop running an orphanage.

“I refused to stop. I told my husband that I have sign a covenant with God and would rather forego the marriage”.