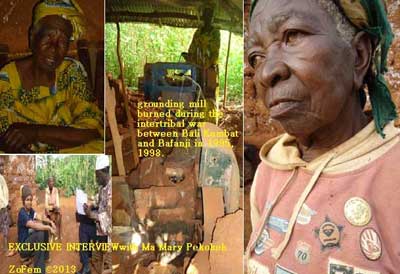 "Imagine, a village old woman like me having lived all my life in the village, and can neither read nor write is now... a symbol of hope to many grassroots women and men”

The story of Mama Pekokeh Mary - a.k.a Peaceful Pekokeh, age 90+, is one of those rare rural voices, whose works have transformed rural farming as well improved the living condition of many rural farmers in her community.   Mama Pekokeh is a Women's World Summit Foundation (WWSF) award winner for sustainable development and creativity in rural life, a community mobilizer, and founder of NJANG FARMERS common initiative group.

Born around the 1920s, in Nbashie, in Bafanji northwest region of Cameroon to father Mbimoh Honfu, a farmer and traditional fence marker, and mother, Ngwiepieb Monica, a full-time farmer.

Mama Pekokeh has lived all her life as a farmer.

“I have farmed all my life. I was born a farmer. My parents farmed for living. Then, I got married to a farmer with together with whom I farmed until death took him away from me, some three to four decades ago.

Now I am old, I am still a farmer. My children, grand and great grandchildren also make livings from farming”.

'My parents laboured so hard'

Inspired by the association WICO (Women's International Coalition), a grassroots northwest-based Women’s Information and Co-operation network which aims at improving the socio-economic situation of women by providing them with small grants (microcredit), as well as supporting and/or facilitating the creation of women’s groups, Mama Pekokeh created the NJANG FARMERS common initiative group.

A childhood dream which Mama Pekokeh finally realized in her late 60s and early 70s.

“I have suffered so much. I saw my parents laboured so hard, spent most time in the farm. I knew one day, things will change. And farmers will have time to engage in community affairs like others.”

NJANG was the first collective farmers group in Bafanji; she says, formed within the 1990s and was legally registered in 1994 as a Common Initiative Group (CIG) for Bafanji Farmers:

“I remember when I started NJANG, which originally was a traditional dance group modified to a farming-and-entertainment initiative, a lot of friends and people laughed at me; many didn’t believe it will work. Some doubted my competence, as an illiterate managing literate men and women”.

At that time, membership of NJANG was just seven people; gradually it grew to 13 – later 20, and now 70+, including young and old people.

And unlike before, some NJANG members say, work is lighter now; harvest is not lost, farm sizes are also expanding to cultivate more crops like cocoyam, groundnuts, maize, tomatoes, etc.

First Corn Mill in the Community

Having established NJANG, Mama Pekokeh said that the group managed to generate some income from their farms activities, which they used to purchase a corn mill in 1995, the only corn mill within that community, serving almost 3,000 people.

Hope for Grassroots Women and Men

“The award came as a surprise! I had never thought that what I was doing would be of such international interest. Less of winning an award…[laughs] imagine, a village old woman like me having lived all my life in the village, and can neither read nor write is now a world hero, a role model to both literates and illiterates, a symbol of hope to many grassroots women and men”. ..

“I remember, after the award, I was contacted by men and women of high profile to share my experience and tell my story. It was a little intimidating because I had never imagined in my dreams  that people of such status will someday gather to hear my story”.

'My house, the corn mill - everything was burned'

A year afterwars, Mama Pekokeh recalls, she joined a group of women for the Peace March to Ndop, to call to the attention of state authorities –  particularly the Divisional Officer (D.O), to see into the end of the war which began sometime in 1995, between the two villages: Bafanji and Bali Nkumbat.

The war that took away many lives, properties were destroyed, people were left homeless, and lots of women and children became widows and orphans.

“War is scary...that of 1998, which started in the night. I can hardly remember a thing except how I ran for my life – only to return to find out that my house, the corn mill – everything was burned.”

Advocating for Peace Between Villages

Talking about the day for the March for Peace, she said,

“Altogether we were 20 women, 10 from Bafanji and 10 from Bali; we trekked straight to Ndop, to meet the Divisional Officer (D.O).  Once we arrived, we were ushered to a hall. Seats were offered to us, and while we sat, waiting on the D.O., the secretary took our names to make us badges. As we gave our names, a suggestion came up – and we were asked to connote each letter of our names.

“I gave my name as Pekokeh with the letter ‘P’ standing for ‘Peaceful’. Throughout the meeting I was referred to as Peaceful Pekokeh and till now, I am called Peaceful Pekokeh.”

'My house is a home for all'

At Mama Pekokeh's humble thatched home, she lives with a young boy and three girls, and yet she cooks for the size of a party of 10+ people.

Come to her house, she feeds you; while you eat, neighbours and children, friends, and families visit her – some to eat, others just to chat, borrow petite food items, salute  her and/ or seek her advice.

“My house is a home for all.

When my only daughter passed away [in 2009], leaving her four kids who are now living with me, I was comforted by the community."

'My daughter understood my dream'

The community is Mama Pekoheh's strength now. Her daughter was also her strength, she says.

“She was my walking stick and my ink on paper. She was learned.

Whenever I wanted to send a message to any person or write a letter, I communicated [my thoughts] to her and she wrote it.  She understood my dream and supported me throughout.

Her death had caused me so much pain. It has left a big gap in my life.

And till now, I have yet to fill that gap. It has also made me a little lax in my movement – though I am aging so”.

“Now that I am old, I can barely work for long.

Nonetheless, NJANG is a large group with very young and active farmers, who are so committed to pushing the vision of the group forward.

I hope someday, NJANG would be able to have another corn mill, such that people’s lives become normal like before, when we used to generate income from the corn machine, and will use parts to purchase fertilizers, seedlings and other necessary products for our farms.  And [hope for the time] when our women and girls no longer have to walk miles nor spend hours to pound maize or ground on a stone.

Above all, I pray to see NJANG continue with the good team spirit, and should continue in helping the community”.