Children’s Right to Play Should Be Defended 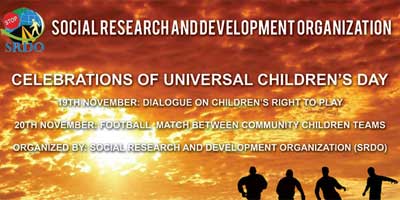 By Amir Murtaza, Pakistan Correspondent for Safe World and Executive Director of SRDO.

As part of their program to celebrate Universal Children’s Day; Social Research and Development Organization (SRDO) organized an important discussion on Children’s Right to Play on Tuesday, 19th November 2013 at its office located at Zamzama, DHA Phase V, Karachi.

Speakers had observed that playtime is one of the most necessary parts of child’s growth and development. It was informed that despite much importance of the issue; it is quite clear that a number of our children are being denied of their Right to Play.

The discussion showed concern over the lack of playgrounds for children to play popular games such as cricket, hockey and football.  It was informed that due to absence of playgrounds children have no option but to play on roads and streets, which is quite dangerous for them.

The discussion pointed out that due to erratic law and order situation and insecurity parents usually don’t allow their children to go out and play.

It was informed that children from affluent families have the opportunity to play games on computers and various other gadgets.  However, children from poor neighbourhoods have very limited options to play.  It was also discussed that girls also have very minimal opportunities to play, especially in playgrounds.

The meeting observed that play enhances the confidence level, decision making ability, leadership qualities and social skills therefore it is very important for the development of children.

The discussion suggested that children should not be engaged in studies all the time and they should have enough time to play and enjoy their childhood.   Additionally, girl should get more chances to play, especially in playgrounds.

It was informed that Social Research and development organization (SRDO), while realizing the importance of Children’s Right to Play, has formed children’s cricket and football teams. It was added that the organization is also in the process to form a girls’ football team in a local school.

It is pertinent to mention that SRDO is planning a Sports for Development program to support the underprivileged children and protect and promote their rights.

At the end of the program it was informed that on 20th November, SRDO is organizing a Cricket and a Football Match between the Teams of Community Children and Partner Schools in Gizri Ground, Karachi.