Pakistan: Child labour - Who are the ultimate losers? 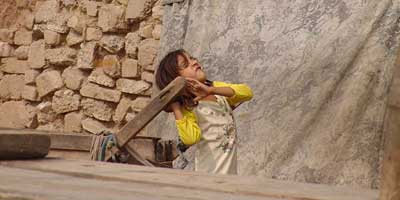 According to the International Labor Organization (ILO), "Child labor refers to the employment of children in any work that deprives children of their childhood, interferes with their ability to attend regular school, and that is mentally, physically, socially or morally dangerous and harmful".

Child labour has been a persistent problem throughout the South Asia, for a very long time. Endemic poverty, lack of employment opportunities for adults, large family size and the absence of strict laws, especially regarding the enforcement of a minimum age for work, and their implementation are some of the major reasons for the abhorrent child labour practice seen in the region, including Pakistan.

There is no denying that the involvement of children in labour is a blatant violation of their rights; additionally, child labour also restricts opportunities of educational attainment for children, and thus limits their options for future development.

A child's earnings are usually the prime reason to send them to work at an age when they ought to be at school. In general there is a widespread assumption that their income contributes significantly to the family's income.

Research has recently been conducted to understand the contributions of children's work in relation to the overall family income. Additionally, the research tried to ascertain the real beneficiaries and losers of the whole phenomenon of child labour.

The Author headed the research, while the research team was comprised of the staff and volunteers of Social Research and Development Organization (SRDO), a Karachi-based NGO.

A multi-disciplinary and scientific research approach was applied to conduct the study. Interviews with children, their parents, their employers and common people were organized to collect the data.

The research team targeted 100 working children, 50 boys and 50 girls. It is important to mention that all the respondents of the research were engaged in the services sector.

In order to get the perception of the common people about child labour, the research team had asked several questions of the common people to get their point of view about the issue. While responding to a question regarding the family background of child labourers, a large number of people responded that the death of the father is the major cause of children's involvement in work with a view to support his or her family.

One may wonder that why parents send their children to work for a minimal amount? The research revealed that the contribution children income in overall family income varies from 10% to 35%. It was disclosed that in some families a minimal contribution of Rs. 50/= per day counts a lot in family income.

It was quite clear that majority of parents are aware of the importance of education; however, these parents were of the view that children's work is necessary for the survival of their families. Additionally, many parents pointed out the prevailing unemployment among educated people in the country and remarked that it is better for the future of their children to start work at an initial stage of their life.

Working children have been a reality in all poor and developing countries, including Pakistan, for many, many years. The research found that employers and working conditions of male and female children are quite different from each other. Girls are primarily employed in domestic work while boys work for small businesses.

The research disclosed that employers of child labourers prefer to hire them due to three basic reasons: 1. Children work, more or less, equal to an adult but for a lesser salary as compared to the adults; 2. Children are more obedient than adult men or women and seldom retaliate; 3. Children are easier to control during working hours.

It was interesting to note that a majority of employers are getting the benefits of child labour; however, they considered such acts as charity or helping poor children. Some of the employers mentioned that they only hired the child because he/she belongs to very poor family and despite the low quality of child's work they give a "handsome amount", only to "help" him/her.

The parents and employers of working children tried to explain that their act, either sending the child for work or hiring the child for work, is in the broader interest of the child. However, none of them had realized that child labour seriously minimize children's chances to enjoy and develop their lives.

The majority of child labourers have no access to any school or formal education system as they have fulltime work commitment. They, mostly, do not receive proper food and healthcare; therefore they have generally poor health. These children have no or limited career development chances while they are also vulnerable to violence, abuse, neglect and discrimination.

Parents are primarily responsible for taking care of their children and there is no justification for a child, as young as five or six, to have to work and contribute to the family's income. Parents should increase the family size only after carefully examining their financial resources rather than expecting the new arrival to work for his/her survival. And above all it's the responsibility of the government to make and implement laws to discourage child labour while providing a social safety net at least for vulnerable parents living in abject poverty.

Similarly, employers should understand that children are not meant to work, even sometime for ten to fourteen hours. They, the employers, should hire adult men or women to work on a market based salary rather than hiring children to work fulltime in lesser salary.

Child labour is a complex issue in every part of world, including Pakistan. It is quite clear that everybody, especially parents and employers, are getting benefits of children's involvement in labour; however, innocent children have always been the loser in this phenomenon.