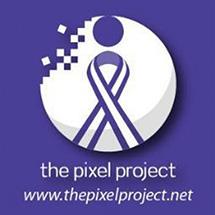 The Pixel Project is a complete virtual, volunteer-led global 501(c)3 nonprofit organisation whose mission is to raise awareness, funds and volunteer power for the cause to end violence against women (VAW) using social media, online strategies and new technologies.

Our team of over 50 volunteers is currently scattered across 4 continents, 12 timezones and over 15 cities worldwide, proving that there are no cultural or social barriers when it comes to this issue.

The Pixel Project is a complete virtual, volunteer-led global 501(c)3 non-profit organisation whose mission is to raise awareness, funds and volunteer power for the cause to end violence against women using the power of the internet, social media, new technologies and popular culture/the arts.

We are a worldwide coalition of grassroots activists and volunteers using the power of the internet to mount a global effort to raise awareness about and hopefully mobilise millions to get involved with ending violence against girls and women. We strongly believe that men and women must take a stand together for the right of women to live a life free of gender-based violence.

Our team is currently scattered across 4 continents, 12 timezones and over 15 cities worldwide, proving that there are no cultural or social barriers when it comes to this issue.

Our first project (still ongoing) is to turbo-charge global awareness about VAW using social media while raising US$1 million for the U.S.A.’s National Coalition Against Domestic Violence and The Pixel Project by getting a global audience to collectively unveil a million-pixel mystery collage of Celebrity Male Role Models at US$1 per pixel.

The project will invite world-famous male celebrities with strong family connections, no history of violence, and are role models for men in relationships with women and children, to participate in this collage of portraits.

The philosophy behind choosing positive male role models from different walks of life is to emphasise that men have a major role to play in breaking the cycle of violence against women.

We also run a number of innovative ongoing online awareness-raising programmes including:

Pixel project has compiled a list of online resources about:

These are links to various organisations working to fight the different kinds of violence against women in countries worldwide.

Many of us are fortunate enough to live normal lives—we work, we play, we have families, friends and life partners who love us.
However, there are many women across the world for whom even the most ordinary activity is impossible.

They may be living in constant fear of a violent husband, or trying very hard to piece back a life that has been ravaged and ripped apart at its seams by sexual assault, female genital mutilation, forced marriage or attempted honour killing.

Any woman facing violence needs help.
She needs to:

Being able to get the help she needs may mean the difference between life and death for her.

In this section of the website, The Pixel Project team, NCADV and WAO jointly present The Pixel Project guides to help you identify the signs of violence and to give the abused woman the help she needs to survive.

You never know – you could save somebody’s life.

Regina Yau is a global citizen who synergises Western liberalism with Asian pragmatism and her own social conscience. In 2009, she created The Pixel Project to raise funds, awareness and volunteer power for the cause to end violence against women using the power of the internet, popular culture and new technologies.

Prior to founding The Pixel Project, Regina was nominated in the Education and Public Service category of The Malaysian Women’s Weekly’s “Great Women of Our Time” Awards 2008 for her innovative awareness-raising work for the breast cancer cause.

Regina is a Rhodes Scholar with a long-standing commitment to gender issues and two post-graduate degrees from Oxford – an M.St in Women’s Studies and an M.St in Oriental Studies. She also has a First-Class BA (Hons) in English from Royal Holloway University of London. Between graduating from Oxford and returning to the women’s movement, she also spent 6 years working as an award-winning Public Relations professional.

"In essence, The Pixel Project as an idea-turned-campaign is outcome of several strands of my life experience, personal decisions, personal history and professional skills coming together at a crossroads.

Perhaps the most dominant motivation comes from painful life experience – both that which is passed down through the generations in my family and that which I experienced for myself:

My maternal grandmother is a strong and stubborn but illiterate woman who married my maternal grandfather at age 16 in the midst of World War II to escape being raped by Japanese soldiers in wartime Malaya. Yet, if her marriage saved her from one form of gender-based violence, it catapulted her into another: domestic violence.

To cut a long story short: She raised 11 children (including my mother) in wartime and post-war poverty while enduring my grandfather’s drunken rages which frequently ended in severe beatings for her and the children. She endured this and other abuse for over 60 years of marriage – protecting her children while faithfully looking after him until he passed away a few years ago.

Even now, I feel so angry just writing about it.

In retrospect, I now know that the mindset that puts up with abuse as “normal” can be passed down through the generations. At least one of my grandmother’s daughters endured either physical or verbal abuse in their marriages.

One generation further along:

I found myself putting up with a succession of boyfriends through my university years who treated me badly – including one who spent months grinding my self-worth down to nothing. Grinding it down to the point where, my friends begged me to leave him because I didn’t know who I was anymore.  After it ended, it took over a year for my friends to help me recover my self and my confidence.

I don’t think I was ever the same person again.

I had to sit down, look back in shock and ask myself: “Why did I put up with it? Where did that come from? Why would these men even think it was ok to do that to a woman?”

That’s when I realised that the effects of domestic violence and violence against women in the family and culture has trickle-down effects:

When you watch the older women in your family put up with it, mainly because it is the only culturally acceptable thing to do, you automatically do it even though your rational mind – and your generation – rejects it.

It also doesn’t help that Chinese culture is notoriously chauvinistic and historically goes through misogynistic phases that leaves embedded attitudes including a strong preference for sons (and preferential treatment for them) as well as the tendency to not talk about “family matters”, leading to any gender-based violence suffered by female family members being hushed up.

It is, horrifyingly, almost Pavlovian behaviour.

Yet it is not just us Chinese. Violence against women blights so many lives no matter what the culture – female friends who have been raped; old classmates who work in some of the poorest communities in the world and seen women being beaten by drunkard husbands; my piano teacher who used to wear sunglasses to class because she could never bear to have the black eyes her husband gave her seen by her students…

So many women live lives of quiet and painful desperation. Some escape, survive and thrive. Others are not so fortunate – they have no way out. All have been scarred by violence in some way.

I rebelled because it doesn’t have to be this way – violence towards women in any way does not have to be acceptable. Women don’t have to accept this as the norm and men should and MUST take responsibility for their actions instead of being shielded  ingrained social and cultural beliefs.

I rebelled by becoming a feminist and was, for many years, an academic feminist – honing my feminist beliefs and thoughts over half a decade at London and Oxford Universities.

(It’s ironic though, that most of my relationships – including the abusive one – took place while I was a full-throttle academic feminist.)

Theory and practice and life experience did not fuse into full-blown activism until I left academia, became disillusioned with the Corporate World within my first 2 years in it but decided to stay on in Corporate only to acquire the skills that I would need to really make a difference.

Business – more specifically, my training in Public Relations – equipped me with the tools and skills I would need to effectively hit a triple bottomline for non-profit campaigns: raising awareness, raising funds and raising volunteer service time. Working in Public Relations was also the fastest way to build the solid and far-reaching network of contacts that would be needed to get projects and campaigns from conception to results.

After a few years of on-the-job training, I began putting my skills and network to work for women’s issues and causes – first working on the breast cancer cause (another cause close to my heart because my paternal grandmother died of breast cancer) and now, working for the Violence Against Women cause via The Pixel Project.

When I look back at my life, the events that led me to starting The Pixel Project, and even as I work on the project itself, it is clear to me that while there is never any excuse for abuse, we MUST reach back to the roots of the violence in order to stop the violence.

This is why The Pixel Project’s mission is not simply to raise awareness about violence against women – it is to raise awareness amongst men and women that we need to realise the seriousness of this problem and act to prevent it, stop it and end it.

Instead of indulging in the blame game and stereotypes, we want to break the cycle by educating young people and by getting men to step up to take responsibility and for women to realise that men are not uniformly the enemy. Both sides also need to realise that it’s not just a “women’s issue” – it is EVERYBODY’S issue.

We want to make this extremely serious – even fatal – issue accessible to all and we want to break the taboos and silence that surround it. It’s when we don’t even want to acknowledge violence against women or even talk about it that we enable it.

Remaining silent is not an option. Not anymore. And it should never have been an option in the first place.

There is still a lot of work to be done and The Pixel Project is just the starting point. At least, it is for me and for many Pixel Project volunteers.