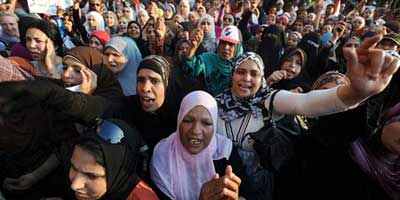 As Egyptian Prime Minister Essam Sharaf reshuffles his cabinet, trying to placate the boiling Egyptian street with a more representative government, women have started to speak up, demanding greater representation in politics.

Sharaf reshuffled 14 ministers in his cabinet Sunday, replacing ministers of finance and foreign affairs, but retaining the controversial interior and justice ministers. Women's organizations contend that with only one woman is in the new cabinet, International Cooperation and Planning Minister Fayza Aboul-Naga, the new government is far from egalitarian.

Although described by the Egyptian daily Al-Ahram as "liberal-dominated," the Tahrir Square protesters that forced the change claimed that even the new cabinet was too pro-Mubarak. The public outcry forced Sharaf to postpone the swearing in of the government on Tuesday.

"This is an intentional ignoring of women’s representation," Nahed Shahata, head of programming at the Egyptian Center for Women's Rights (ECWR), a Cairo-based organization, told The Media Line. "Women stood alongside men at Tahrir Square. They were killed and injured just like men. It's not a question of gender; this is an important period of democratic transition."

Five months after President Husni Mubarak was deposed in a popular uprising centered in Cairo's Tahrir Square, Sharaf's cabinet, appointed and controlled by the army generals of the opaque Supreme Council of the Armed Forces (SCAF), has struggled to find stable ground.

Shahata said there is no religious or educational barrier preventing women from holding leadership positions in Egypt, noting that women already serve as judges, academics and social leaders. She said it was the government's responsibility to instill notions of equality in society by appointing more women in parliament, in the new government and as governors.

The press release issued by ECWR did not explain what female ratio would be considered "fair", but Shahata said that 30% was a reasonable goal.

Women have been allowed to vote in Egypt since 1956, and under a bill passed in 2009, 64 seats in the People's Assembly, Egypt's lower house of parliament, are reserved for women, out of a total of 454 seats. Before that, only nine women held seats in the Egyptian parliament after the 2005 elections. They represented just 2% of the total seats.

The Muslim Brotherhood, Egypt’s leading political force, has allowed women to run as parliamentary candidates, but it opposes women from running for president, arguing that the position is reserved exclusively for men under Islamic law. There are no female members in the Brotherhood's decision making organs – the Shura Council and the Guidance Office.

Nevertheless, in the presidential elections due to follow next autumn’s parliamentary vote, one woman is planning to run against 19 men. Buthaina Kamel, a 49-year-old television anchor and social activist, has become popular among the masses of Tahrir for her active participation in the revolution and her outspoken stance against the military regime.

The revolution is being stolen

"The revolution is being stolen," she told the London-based daily A-Sharq Al-Awsat on Tuesday. "We were quiet and sat around long enough, and as a result we have moved backward," Kamel, who returned to Tahrir Square this week to continue protesting against the government, told the daily.

Unveiled, dressed in modern garb; a cigarette between her fingers, Kamel promised to launch an anti-corruption campaign. She said the rhetoric of SCAF reminded her of the Mubarak era, and contains nothing but threats and warnings from the perils of the Tahrir protesters.

Maye Kassem, a political scientist at the American University of Cairo, said the debate about female representation in politics is irrelevant, because she doesn’t believe Egypt will experience democracy in the near future.

Kassem said quotas were anti-democratic, whether applied to women or to any minority group in Egypt.

"Quotas are fake," she said. "They're just another form of authoritarianism. The first Egyptian woman entered parliament in 1924, so why should there be a quota? Women should continue to work hard, just like everyone else."