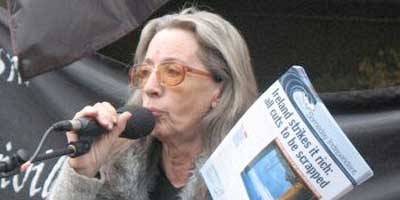 Interview with Maura Harrington, of Shell to Sea Campaign

In the quiet and tranquil countryside of Mayo, in the far west of Ireland lies one of the most controversial gas projects. Protestors reside in the solidarity camp at Aughoose, one of the two locations which is part of the Corrib Gas Project.  The project is based along the Sruwadaccon Estuary which is designated a Special Area of Conservation.  The Corrib Gas Field is located about 50 miles off Erris Head in County Mayo, known as the Slyne Trough.  An exploration license was granted to Enterprise Oil in 1993, before Royal Dutch Shell took it over in 2002.

The Corrin Gas Project began developing over the next few years until 2004, when protestors began to circulate the site.

Many locals were concerned over the environmental impacts of the project along with the health and safety aspects. What is surprising is that, despite the amount of information that is available on the Shell to Sea Campaign website, there is little information in the media.  Originally in 2004, when the protests first began, the issue received a huge amount of public interest and ample media attention. Now in later years with the situation yet unchanged, it appears that mainstream media is losing interest - it is no longer 'news'.

In August 2012, Friends of the Earth Ireland held a conference in Liberty Hall, Dublin, to revive the attention on the on-going protest against Shell.  The conference described the controversy and the human rights concerns, and went into great detail surrounding the environmental impact of such a project.

While at the conference, I spoke with Maura Harrington, who has become a local hero and celebrity within the cause. 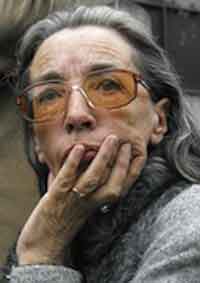 Maura, a 59 year-old local and retired school teacher, came into public attention when she began protesting against Shell in 2002.

To look at Maura, she is small in height and of slight build, a build both due to her genes, but also to the hunger strike she took part in to capture the attention of Shell and the general public.

I am quite taken aback when I first meet Maura; it’s hard for me to believe that a small, motherly woman of her stature has such power and determination to go against a major force such as Shell.

Maura explained why she is passionate about the campaign:

“On a local level, I feel I should defend this place of beauty and on a national level, I see no economic benefit from the extraction of oil and gas from Ireland.”

After the first planning application for Shell was submitted in 2002, Maura began battling against Shell. This involved five years of research and hard work, and as Maura said herself, “We knew nothing about oil and gas extraction, we lived in a green field area where there was never any heavy industry.”

Maura also spoke of how both her and her local community were really only pinpointed on the map after the troubles with Shell:

“We were always ignored, politically, and every other way until we were discovered by Shell.”

What was also apparent on Shell’s initial exploit fo Erris, was the lack of respect for the local communities and the assumption that the people of this area were somewhat less intelligent than the “movers and shakers” of Shell,

“We were considered bog-trotters.” said Maura.

Maura Harrington goes on hunger strike in protest at Shell building a gas pipeline through the village of Rossport, County Mayo in Ireland. Photo: Guardian.co.ukAfter enduring 4 years of disputes with protestors, Shell's plans were still under way and the first pipe laying ship ‘The Solitaire’ arrived at Erris on the 9th September 2008.

Maura felt desperate and began a hunger strike in protest against the arrival of ‘The Solitaire’, the pipe laying ship assisting the Royal Dutch Shells Corrib Gas Project.

Maura vouched to starve herself until such time as The Solitaire exited Irish waters, a process which took ten days outside the gates of Shell at the solidarity camp.

After ten days, the ship moved further out to sea until it was no longer considered within the vicinity of Irish waters.  When this was confirmed, Maura ceased her hunger strike, satisfied that Shell’s efforts had been implicated once more.

“Before beginning the hunger strike I was 6 stone 9 pounds, after the 10 days I weighed in at just 6 stone, over a stone below my healthy weight range.”

For a woman of her size and build, Maura should weigh approximately 7 stone 2, but with the stress of the protest campaign and the hunger strike, Maura is far from her ideal weight.

Photo: People Before Profit - United Left Alliance Aside from protesting and the hunger strike, Maura has landed herself in a bit of trouble over the years.  Maura is no stranger to Mountjoy Prison, or a courtroom for that matter.

Maura was jailed for 14 days for non-payment of fees relating to her protests against Shell’s Corrib Gas Project.  Not only was she arrested, but was arrested outside the funeral of a local neighbour.  Her sentence was furthered by 30 days when, on the day of her arrest, she assaulted a member of the Gardai.

When asked about her experience in Mountjoy prison, Maura replied:

“To be perfectly honest, it wasn’t really that bad. I had a lot of support from other women, and it also helped that my husband marched outside the prison gates everyday for the month I was in there, holding a banner “Free Maura”.

When security at Shell is mentioned, Maura’s facial expression morphs into a look of complete disdain.  Security levels at Shell are at an ultimate high, with highly trained officials in areas such as anti-terrorism - they are not individuals to be messed with:

“I looked into a security man’s eyes one day I saw no remorse; what I saw was an evil individual, capable of anything.”

Maura takes a lot of negative press in her stride and ignores most of the comments directed at her.  In one particular instance, Maura found it hard to forgive and forget; Judge Mary Nevins advised psychiatric assessment for Maura due to her “bizarre behaviour”, a comment that Maura maintains, was of no benefit to the case in question, and was merely a dig in an effort to embarrass Maura.

A somewhat misunderstood individual, Maura simply fights for what she believes is right. There is no denying her dedication to protesting against this project. Even after almost 11 years, her enthusiasm still remains.

An award winning documentary film which took 4 years in the making called, “The Pipe” talks about the Corrib Gas Project and the small farming and fishing Rossport community, taking on the might of Shell Oil and the Irish State.  It features interviews with Colin Joyce of Shell Ireland, and interviews with locals and protestors such as Pat O’ Donnell.

The documentary opens with views of the Erris landscape, and from the beginning it is obvious that the undisturbed countryside has the potential of being ruined, and the film also displays disturbing images of protestors and Gardai (Irish police), in what can only be described as a brawl.  Interviews with locals are featured extensively in the documentary and one gets a sense of pride these people have over Erris, and their determination in wanting to preserve the land, their livelihoods, and way of life.

Protestors explain the trouble that has been caused and the treatment they have received from Shell and local authorities.

Friends of the Earth

Shell to Sea campaigns against the exploitation of the local community in Erris.

Eimear Clabby is a Safeworld Student Writer. She has just completed a BA in Contemporary Culture and Society and has applied for an MA in journalism.

"I have a passion for journalism...

Veronica Guerin remains one of the most influential crime reporters in Ireland.

Veronica, even after her death, is my icon. She fought for what she believed was right, and she wrote about it to express her concern to society.  She sums up what true journalism stands for: passion, fierceness, and determination.

I want to become a leading female crime reporter in Ireland and stand out from the male crowd.  Crime journalism in Ireland lacks a female component, a position I wish to fill most graciously.  In tribute to Veronica’s memory, never ask a man to do a woman’s job."