Sesapzai - The Woman’s Body is a Battleground 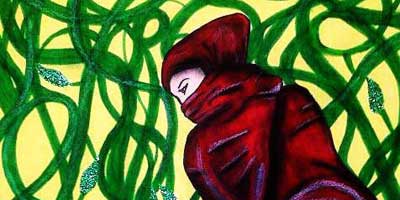 The Woman’s Body is a Battleground

In an enlightening class I took last semester, my professor said something that stuck with me long after the class/semester ended, for it held so much raw truth. She said:

“The woman’s body is the battleground upon which cultural and religious wars are fought.”

Being a woman in any given society, whether it may be within South/Central Asia or in the West, there are often triggers of distress and tension, and the constant battle with one’s image and appearance that plays over and over again in a woman’s head like a broken record. We live in a world where, right from the time we are born up until we die, we are told that our body defines us; that our sexuality should be proscribed – protected; and that we should do everything in our power to guard our bodies – our honour – from the enemy: men. And, if we don’t, then the blame falls solely upon us.

While there are some who manage to break free from this never-ending cycle of staring, leering, gawking, examining, judging, etc., most women will, however, be forever stuck in this rut for the majority of their adult lives. The worst part is that some women have even accepted it – accepted that they, their bodies, are the reason behind every incident of sexual harassment, sexual abuse, and all other forms of violence that have been, and will be, inflicted upon them. It has almost become like an unspoken sort of awareness, where a woman suddenly realizes how dangerous her body is to her safety. And if she slips – even once – she will have no choice but to suffer the dire consequences that accompany it.

Furthermore, when we look back at history, especially in the context of war and conflict, women’s bodies have often been treated as territories to be conquered, claimed and marked by the contender. This is why violence, especially sexual violence, against women was and still is quite common during communal/ethnic conflicts. Women would not only be raped but their bodies would be marked in such a way so as to remind the opposing enemy that their women – who are supposed to be “pure” and a representative of the community’s/nation’s “honour” – are stained.

Such markings would include stripping a woman naked and serenading her in shame in public; physical mutilation and disfigurement, i.e. cutting off a woman’s private parts, or other parts of her body, such as her nose, ears, hair, etc.; tattooing and branding a woman on her private parts, i.e. her breasts and/or genitals, with hate slogans against the enemy; and other forms of debasements to emphasize conquest and suppression.

Thus, the violation of women’s bodies equates the same political territories upon which the men from the rioting communities would inscribe their markings on. It’s like an uncanny sort of relinquishment – a victory, where it becomes blatant that in order to defeat a nation, you must violate their women. Such atrocious violations against women hence create a sense of helplessness in communities where a woman’s honour is more important than her life. And in order to revive this honour, members of the community (usually male) have no choice but to kill off every single female who was either raped or physically/sexually violated in any way. For it is known that a woman’s dishonour is the dishonour of the ethnic race, the community, and the nation as a whole.

Consequently, the targeting of women’s bodies is both an effect and a cause of the acceptability of sexual violence against women. It serves to subjugate women further, and creates an environment where violence becomes habitual and is committed with impunity. And while there is no denying that the blame often falls upon the woman for failing to guard her body from being violated, even if it is against her own volition, an equal burden falls upon the shoulders of men who deeply value their women’s honour.

I personally believe that as long as such societies conventionalize the woman as a symbol of honour and continue to instrumentalize her in such an ignominious way, gender-based violence in these societies will persist, making any iota of progress seem bleak.

Even so, not all societies associate women with honour, despite the fact that rape and other forms of violence against women still occurs. There are societies, particularly within the South and Central Asian region, where a woman’s dignity equates her entire existence as well as the existence of those around her. And though it is clear that men, too, are targets and victims of violence, it is the gendered nature of violence that marks women’s experiences as wholly unique.

SesapZai is a PhD student in international rural development, focusing on Gender and Development of Pashtun women.