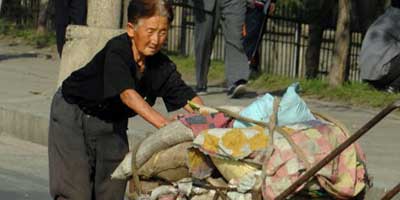 North Koreans have increasingly been crossing into the northern border cities of China, with women outnumbering men.

"Women represent about 70% of some 200,000 North Koreans who fled from North Korea into China in the past few years," Kim Tae-jin, a North Korean defector who leads a non-government organization to protect the human rights of fellow North Koreans tells Inter Press Service.

North Korean men are less tempted to cross the border because, with little local connections in China, they are easily tipped off for arrest by security guards and subsequently sent back to North Korea, Kim explains. "Besides, North Korean men could hardly compete with the Chinese for the few jobs available."

"Once in China, fear of being sent back to North Korea grips them, keeping them silent and obedient no matter how abusively they are treated," Kim adds.

Some former brides managed to make it all the way to South Korea. "My Chinese husband regularly reminded me of how much he paid for me. I felt like his possession," says one North Korean woman.

"When I visit China's northern border villages, I often see a group of North Korean teenagers-turned-brides of Chinese husbands," Kim says. "They gather around a village well, chatting and laughing. Many of these brides must stay there for fear of being captured by North Korean guards to be sent back to the North."

In the face of the harsh reality in China, some women even consider going back.

"When I first arrived in China, I went through shame, fear and humiliation. I even missed my home in North Korea.

Although I was starving at home, I was at least a citizen there. In China, I had to be invisible and dumb," says Yoh Su-Wa, a woman who fled North Korea and made her way to South Korea after four years in China.

Women are the 'breadwinners' in North Korea

Within North Korea it's hard.

To be a North Korean woman is to be tough and brave, fighting all odds in an impoverished country that gives priority to nuclear and missile testing over feeding its population of 23 million, North Korean defectors say.

The mother usually overrules the father in North Korean homes, contrary to the traditional family picture of the obedient wife and mother coupled with the sole breadwinner father, defectors add.

Hunger forced women to take to the streets after North Korea's food rationing system collapsed during a famine in the 1990s. Markets sprang up across the country, and North Koreans bought and sold whatever was available. With shrinking rations at home, the only way to survive was to sell or barter their belongings in the black market in exchange for something to eat.

In North Korea, a woman is usually the family's main breadwinner, while her father, husband and sons are mostly idle, kept away from state-run factories that have shut down or seldom operate.

"Maybe my father was used to the cosy system of communism where rations are equally given whether he works hard or not," said Lee Sung-Min, who fled North Korea and made his way to South Korea in the early 2000s.

"My father found it humiliating to hawk goods in the street," said Lee, who asked that his real name be withheld.

Many women who make it to South Korea find menial jobs cleaning buildings, or work as waitresses or housemaids. "Women tend to be faster than men in fitting into a new life in South Korea," Kim says.

Meanwhile, North Korean men have a harder time finding jobs. Even if they do get employed, Kim says, many soon quit. "North Korean men find it hard to adapt to a different work culture in the South where men are treated differently depending on their performance and efforts."

The Creation of the Living Dead: North Korean Refugee Women in China

Lastly, China’s one-child policy, as well as the legal incentives it has created for male child preference by enacting patri-lineal name and inheritance laws, has resulted in a population dearth of young Chinese women. This dearth is particularly apparent in rural areas, because women born in these areas often migrate to urban areas for better economic opportunities. Therefore, the North Korean women that traffickers sell are in high demand by Chinese men, often poor rural farmers, who wish to purchase “wives.

Methods by which North Korean women are trafficked

North Korean refugee women are usually trafficked in three ways. First, prior to leaving North Korea, traffickers promise the women better employment opportunities in China. In some cases, traffickers are explicit about their intentions to sell these women as “brides,” and emphasize the better life these women would lead as a result of “marriage” to a Chinese “husband. Families also may opt to sell their daughters to a trafficker to make money. Second, while refugee women are crossing the border, traffickers abduct them, either by force or by persuasion. Third, women may be kidnapped and trafficked after having settled in China for a period of time.  Traffickers will kidnap these women at places with a high concentration of refugees, such as river crossings, railroad stations, and markets near the border. In addition, Chinese officials might arrest a refugee and, instead of deporting her, might sell her to traffickers.

Purposes for which North Korean women are trafficked

North Korean women are trafficked for two main purposes: for sex work in karaoke bars or brothels and as “brides” to Chinese rural farmers near the border.

Many reports characterize the men who purchase North Korean refugee women as “brides” as elderly, often widowed or disabled, and poor rural farmers.

Approximately sixty to seventy percent of women who are trafficked experience abuse and violence by the hands of their traffickers and/or their Chinese “husbands". Women have reported being locked up, physically and emotionally abused, and raped by the men who purchased them as a way to make them subordinate; non-compliance can lead to starvation, more beatings, and in some cases, death.

However, many women stay in these “marriages” because they have developed an emotional attachment to their husband who may treat them well or because they have given birth to children who they do not want to abandon. Many women also feel that their lives with their “husbands” are simply better than if they were to be deported back to North Korea.

For these reasons, China regularly seeks out and deports North Korean refugees back to North Korea. “Marriage” to a Chinese “husband” does nothing to protect these women from deportation: since they are considered illegal immigrants, and marriage to a Chinese national does not endow citizenship, these “marriages” are considered null and void. In fact, many “married” refugee women are regularly reported by others in the community to Chinese officials and deported, leaving behind not only their “husbands,” but also children born of their “marriage.”

That refugee women have no legal status in China renders them extremely vulnerable not only to sexual exploitation but to exploitation in China’s labor market. Some refugees have recounted that once employers discover that their employee is in fact North Korean, they abuse, fire, deny benefits and/or wages, or otherwise mistreat her. Traffickers, brothel owners, and others in positions of authority over these women also use the threat of deportation as a way to exercise control over these women. And, it is not difficult for employers to identify their new employees as North Korean due to these women’s unfamiliarity with China and inability to communicate fluently in Mandarin.

Children of North Korean refugee women who are repatriated are often kicked out of their homes in China and turn to the street to beg for money or for food.

When repatriated in North Korea, refugees are sent to labor camps, their families are deemed “hostile” and consequently, access to basic life-sustaining needs is limited, and pregnant refugee women are often forced to undergo abortion, or officials will commit infanticide of their babies soon after birth.