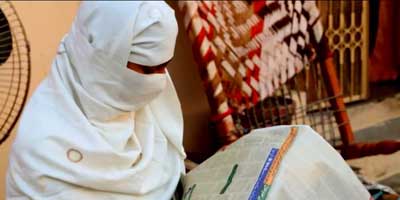 Those who have watched our documentary 'Flight of the Falcons' know Miss Ayesha very well; she is from a family of seven sisters and one brother. During the last year, we had been struggling a lot to convince her father to allow her to get more education and to serve in the Pakistan army or police.

We prayed a lot. I myself visited her home many times; before every visit, we had to think of lot – we had to make grounds for the meeting every time. Her mother was there as our advocate: she was used to telling us about her father's mood and when it was a good time to talk to him.

She kept telling him about my successes in my life as a woman and that if women get an education and a job, it will not only secure their own future, but it will be helpful for their families (it had taken me a few months to convince the mother first).

Even just a few months before, when our documentary was being filmed, he said very clearly that ’’We should not allow girls to go outside’’ and it made us feel hopeless.

But we did not give up; we gave extra time to Ayesha so that she would perform better in her final exams of matriculation. She struggled very hard. I tried to give her hopes: I showed to her and other girls films about women’s struggles in their individual lives to make their dreams come true. I gave them books about such women to read so that they would feel more power in themselves.

I promised to her father that I would help Ayesha to get success and I promised that she will not break the rules and will not forget the values of her family – and that her father will be proud of her.

I took a promise from Ayesha, too, that she will not let me down – in front of her father, because if she will break any rule of society, it will be difficult for me to convince the fathers and brothers of other girls to let them get an education and a job. It can be very risky.

So recently, a miracle happened when her father and mother came to my home, and her father said,

“Sister Zeph, please help her to get more education, and to find a job in the Pakistan army.”

I was speechless and I could say only thanks to the God, and thanks to him. Ayesha is very weak; her result of matriculation will be announced in August 2015 and we know she will get very good marks, so we have five months to get her body fit, so that she can be selected in the Pakistan army.

Her father is a labourer; he has to feed 10 persons everyday and does not earn much, so of course Ayesha cannot get healthy food. They can get food only to be alive; they cannot afford milk, fruits, or meat to eat. They eat very simple food so during these five months, I will have to arrange a good diet for her body fitness.