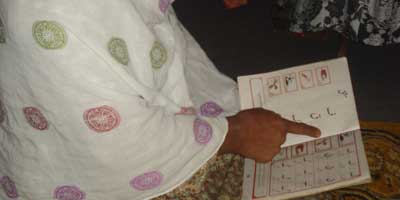 She was just a child when her mother died, and she had to look after her three younger brothers; when she got married, the behavior of her in-laws was very humiliating for her, because she could not produce a son for them.

She gave birth to four daughters, so at the birth of her fourth daughter, she was thrown out of the home by in-laws, as a punishment, for not giving birth to a boy. Her baby was just a few hours old when Bibi's head was injured by an attack with a big brick by her brother in-law.

Her daughters were taken from her, whom they treated like animals. Her husband did not care for her – he never gave her even a single penny to bear the expenses of the family, and he never gave her love and respect.

But she was very brave: she went to all the elder men of her family, brought them with her to the husband’s home and took her girls back – she left her husband there and came with her daughters to her father’s home and she started doing a job as a ward servant in a hospital so that she could earn something for the survival of her three younger brothers and four sisters. Soon, however, her husband got injured in an accident and after some time, he also came to her.

He was alive but could not do any work to support the family, because of his permanent injuries. She had to look after him. too.

For years she worked day and night for her family of nine members, there was no one to support her.

Then her two brothers got married and they said, “Now we have our own families so you leave our home – we do not have space for you.”

Razia stayed in a rented home for some time and then after collecting enough money, she made a home of a single room.

She never brought her daughters into work; they lived in poverty, but with dignity and with self-respect.

She always asked them to get an education, as only education will resolve their all problems.

She wanted them to be able to do office work, so she asked them to get an education only. Even in that poverty, those girls were so very confident that, during the winters, they would not disturb their mom while sleeping and were used to studying in the bathroom in night time.

Then time changed – one of her daughters got married in a big city; she brought her two younger sisters there and they started doing a job, and Razia's one daughter who was living with her, got a job in a big organization with her high qualification.

Now she lives at home, she does not have to do labour any more. She has good food and nice clothes she has a comfortable home and respect in the society.

So it was a time to make her childhood dream come true, she did not think it was late. She did not mind that the people of the village would make fun of her, and she is still as determined as in young age.

At the age of 65, Razia Bibi decided to get education, and now a 10 year old girl is her teacher, who teaches her counting and alphabets of Urdu and English.

She learns her lessons day and night; she keeps studying in the night until she does not sleep.

Razia Bibi is an example for the society that there is no need to be young to make your dreams come true; every day is a new day, every moment, which comes to our life is a most precious moment, which will never come again and which was never before.

We should take advantage of every moment of our lives to, make our dreams come true; she wants to do matriculation.

I am proud of her; she is an honor to the Zephaniah Free Education academy.