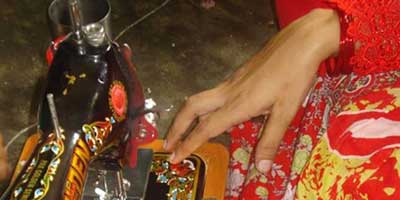 Norin is a 27 year-old woman; her father is in prison due to some reason.

There are five sisters and two younger brothers; she is the eldest one. A very sensitive and hard-working woman, she wants to do something for her family, and she wants her brothers and sisters to get very high education.

She is a very good tailor, so she has been stitching clothes in her village, but she was not being paid for months for her stitching, because most of the people are poor in her village, so they do not pay on time.

Therefore she stopped doing it.

She was very upset and left her village and started living with her aunt who lives in my village, so that she could find a better work by living near the city.

The way she thinks I like it: she always has new ideas, and is looking for an opportunity to prove herself as an ambitious young lady.

So on the first of this month, I was able to give her only $5 out of my salary and asked her to buy some toffees, biscuits, and chips for the girls in stitching center and beauty salon training center and sell [the items] to them, because all of them are young and have this much pocket money to buy and eat such things.

Along with this, I hired her as a teacher in our stitching centre, because our number of students is increasing and one teacher cannot control them alone. Secondly, since the day she arrived here, I have been looking for an opportunity for her, so I ultimately hired her.

Last week she got her first salary, which was not that much, but still she was so happy, she wanted to go to her home to meet her family. She went to the bazaar and bought some toys for her younger brothers, and she bought a new pair of shoes for her mother which she showed me; she was very thankful for all.

She made-up her eyebrows after a long time – she wanted to look good, because of her confidence in being an empowered lady.

When she was leaving for her home, I saw a shining in her eyes, the way she was walking it was looking like she was now very hopeful, like she has won a battle.

I know she deserves a lot more, and I could not do much for her, but at least I was able to show her a way to make her dreams come true.