Forced Marriage and Death Threats - No Chance of Education 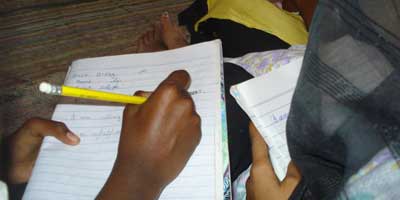 I am running a free school in Pakistan, with three classes of formal education: for girls and boys, a women's learning center, and an English language class for girls.

Every year after exam results, I give a party for my students and invite their mothers and sisters, too.

This time, my student Fatima's elder sister was also invited; I saw her for the first time. She was such a very beautiful girl – like a film star. She was so excited to see what we were doing – and she promised to join our women's learning centre. I welcomed her.

After one week passed, she did not come to join us; I asked Fatima why her sister had not come; she said, “Sister hasgone to her home because she is married.”

I was silent because of course she had to go.

After a pause, she added, “But she says she will die.”

I immediately turned my head towards her and asked, “Why?”

“My uncle wanted to marry a girl, but that girl's parents were ready to let them get married if we would give two girls to their family; so my two sisters got married with her brothers and then my uncle could marry that girl.

My one sister has compromised, but this one is not ready to live withher husband as he gives her mental and physical torture. She came to our home back and waited for our father who lives abroad so that on his arrival she will be safe and he will get her divorce from that man.”

But when father came back, he forced her to go back [to her husband] because this is a rule in ourcommunity called Gujrs, that if a girl will ask for a divorce, her two sisters will be given to her husband or to any man of his family –  and aboutone million rupees($10,000), and if the girl's family will not be agreeable on this either, the girl will live there, no matter what kind of situation she isfacing.

Or all the community will leave her family alone and will shun them completely.”

Threats of Murder and Rape

So her father felt helpless as this is about his 'honour'.  If she refused to go, people would have called him a disrespected man and their family would not have any dignity.

Her father forced her to go back; now she is in her husband's home and has said that she will commit suicide, but will not live with her husband.

Her husband is threatening her that if she returns to her family, he will kill her brothers and will keep her sisters without marrying them.

While writing her story I am thinking of her helplessness because she will have to choose her own family's lives or her own life. If she leaves her home and family and goes to any NGO for help, she will be killed in the name of honour.

This time, maybe she is crying somewhere,

Maybe she is being tortured; I do not know whether she has eaten something or not.

Home is a Prison Sentence for Some Women

We think that those women who live in the home are protected, but I think that by keeping our women in their homes, we actually keep them in a prison, where they have to compromise on everything against their will –  and if they try to break free from this jail or do not follow the rules, it will be considered justifiable by their families and society to kill them, although they are not the criminals –  they are only the victims.

I do not understand one thing: that if God has given a brain to women, then why in our culture is it thought that women cannot think, they cannot make decisions, they cannot live their lives with their own choices?

I really do not understand this thing.

Why has God given us women the wisdom to think, a voice to speak, and a heart to have feelings if it is an honour to live without speaking out about cruel and injustice acts by men?

If it is not wrong to accept everything as it is, why it is wrong for a woman to decide for herself that which makes her happy and what makes her unhappy?

Why is it mainly women who are killed for honour... why is it that men cannot be killed for this most important thing that our culture values?

This is only one story of my students' lives, but there are so many that are unheard; I cannot imagine what kind of situation she is facing and what is her husband's behavior.  In our society, no one speaks for others; we do not help anyone to live and to enjoy life.

Fatima's story is no more than a juicy topic of gossip for the people of my village; everyone asks about it and enjoys listening to it, but no one want to change the situation for her.

No one goes and tells her that we all are with you – to say,  “Just take a stand and youwill not be alone.”

Society Does Not Feel Her Pain

We do not have the courage to speak against wrong things and every one of us has to be a victim once in our lives.

We as a society do not feel her pain and we do and do not take a stand to change bad and ineffective traditions.