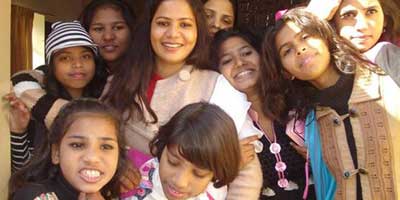 Poverty and Dependence in Pakistan

Naima is sitting here with me: she is 34 years old and has been worrying that she is still not married. The reason is the same as for many women in our country: poverty.

Naima has worked as a maid in a home for many years; she is paid $20 a month for her work. She could not complete her education. She loves to learn English, but she gets tired from working all day, and neither she nor her two sisters are able to come to me to study.

After a long wait, someone has now sent a marriage proposal to Naima.

For many years, Naima has been dreaming of marriage and a good life.

She has not seen the man yet, because according to custom she does not have that right, but she feels it is enough that she will have a home and a man who will love her, who will protect her, and who will respect her; this is what she is dreaming of nowadays.

If she asks to see her fiancé once before getting married, it will be an issue of honour for her brother who, she says, never asked her, “How are you my sister?”

And now she is is struggling to arrange her wedding ceremony and finance it, as she has to do it all at her own, as well as continuing to support her mother.

The amount of dowry she can provide may affect the level of respect she gets from her future inlaws. Wedding clothes and 'fake' jewelry are also important to her - particularly as she is marrying a man who has never seen her. Then she also needs to provide food for around 200 wedding guests.

Yet she is stepping towards a very uncertain future.

In her family there are three sisters and one brother; all of the sisters had been struggling all their lives to make a home for the brother as he is considered the future of their generations.  However, he moved out when he got married and does not speak to his mother and sisters now.

Her brother does not even talk to her, but she never complains because at least they have a brother – her mom has a son at least, and they are happy about this.

They become happy with very small things –  their dreams are very small, and after Naima's wedding, her mother - who is 80 years old, will live with her or alone.

Her mother felt she was very lucky to have a son; she did not provide her daughters with an education, and they are not skilled. They do not have their own home. They do not know what a career means or how to plan one.

Still it is thought that a son is the only source of happiness.

My Vision for Women and Girls

This is a story I see every day around me. I have a dream for women of this world.

A world where they will be pilots, astronauts, doctors and engineers.

Where they will be treated in the home and outside the home like boys are being treated.

I want such society for women, where men and women will have equal rights and responsibilities.