Another Soldier’s Heart too broken to continue... 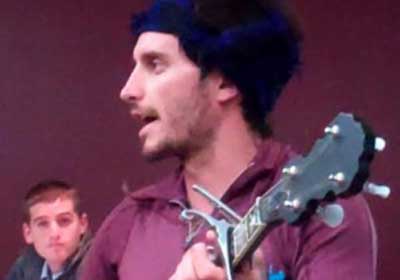 I received some sad and startling news... One of my adopted ‘nephews’, a three-tour veteran of Afghanistan, Jacob David George, took his own life recently.

He took his own life because he couldn’t face the pain and torment of life seen through the eyes of one who has faced the hell of war and brought the accompanying demons home with him. Like so many of our youth who have returned from the killing fields, the effects of PTSD reached farther and deeper into his soul than he was able to heal.

Jacob spent the years after he served in Afghanistan riding the country on his bicycle, sharing the ugly truth that he was told to live and experience, in the supposed name of democracy and freedom. He protested, sang, shared his story, assisted others having a hard time and fought hard for peace and justice.

One more soldier who bought the whole ticket about serving God and country and making the world a better place to live in.

One more soldier who was lied to and ordered to kill first and question later.

One more soldier who returned home wounded, broken, torn apart on the inside and left to deal with this new stranger within by prescribed drugs that didn’t help, and ineffective ‘counseling’ practices of a VA too strapped by its own inadequacies to actually provide effective treatment, assistance, guidance, healing, or authentic help.

We have allowed our country to become consumed with a permanent state of war. A state that serves the bellies of the few and plows through the lives of the many who are destined to fight these senseless atrocities. We have been lied to, we have been taught to believe that we are exceptional and that our way of life far surpasses any other known to the modern world.

We are lead to believe that war is inevitable and necessary in order to find peace. We are fools because we either believe the lies, or worse, turn our eyes to view the nonsense we are fed through the silliness of mainstream media.

How many soldiers' hearts have to bleed out before we end the madness, stop the wars, stop the violence at home, stop the devastation to the earth and her inhabitants, and begin the process of healing what must be healed?

I lost a friend and the world lost another voice crying out in the wilderness, begging for peace, love, compassion, and forgiveness. My world seems a little bit darker because a bright and shining light was too injured and broken to go on.

Ymani Simmons is a peacemaker, writer, mentor, community elder, advocate for Mother Earth, indigenous rights and a supporter of women through a voice of awareness, spiritual circles, retreats, ritual, and counsel.

She is a Delegate with a Fellowship of Reconciliation 2007 people-to-people peace delegation to Iran; International Consultant for the Kashmir Center for Peace and Reconciliation (Srinagar, Kashmir), a non-political organization focused on building the skills of leadership through nonviolence.