Talat Yaqoob: The 'Freedom' of Nudity 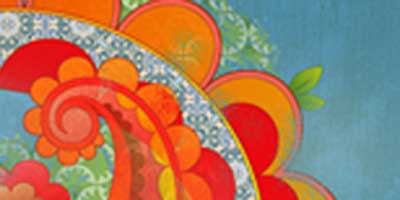 The 'Freedom' of Nudity

Talat gives an insight into a conversation about Femen with her niece...

Nudity was the topic of choice this Friday and for reasons you can probably guess. Not a topic I particularly encouraged, I take no joy in awkward conversations with my nieces. I mean your aunt, who to a 14 year old must seem and I quote “sooo old” saying the words “nudity” or “naked” is the stuff of nightmares for any young person. But it was still the topic this week.

I’ve encouraged my nieces to read and talk about what’s going on in the world and then, if they want to, talk to me about it. I have also explained that if what they are reading happens to me a complicated economic theory then to perhaps give me a week or two to get back to them…At which point I take the financial times and a dictionary out.

So this week my niece asked me about FEMEN and was a little perplexed. FEMEN is a radical feminist group which uses provocative imagery to make feminist statements, usually these statements are written on their naked bodies. Saves money and trees making a placard, I guess.

It has escalated in the past week after Amina a young woman from Tunisia, took a photo of herself with the words “My body belongs to me” in Arabic and posted it on the FEMEN Facebook page. This has caused outrage and has called for her to be stoned to death or ostracized from society. People have been quoted saying she will “given other women ideas” – that their body belongs to them too?!

Up to this point Amina is right and the right-wing extremists using Islam as a shield are wrong. Religion, morals, spirituality, beliefs are individual and should be respected as such. Who is anyone to say what Amina’s relationship with her body or her God should be?

What comes next is where things go wrong, and this is where my niece was most confused. Any conversation I have had with my nieces has asked them to question what is around them (including me) and have told them that feminism at it’s core was about liberation and choice. Here’s the dealo – Liberation doesn’t necessarily mean western values. I know, MINDS BLOWN!

After the episode with Amina, the FEMEN group has decided to turn against not only patriarchy but Islam. They are not the same things. Yes Islam, like all religion, and indeed every avenue of society, is soaked in patriarchy but they are not the same thing. At this point, myself and FEMEN must part ways. Not because I come from a Muslim family, my decisions are rarely influences by that, since I have been taught a very open minded Islam, but because of my feminist values. The values that tell me my feminism is not for imposing on others. That in itself defeats the purpose of the entire movement. 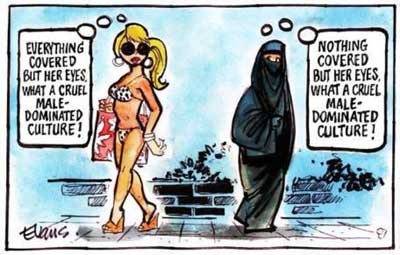 FEMEN have urged women to come forward to defend Amina by writing ‘My Body Against Islamism!’ on their naked torsos. They have also asked people to tweet and sign a petition, I have done the latter two, because that works for my feminism. But the problem arises when FEMEN have equated not protesting topless with my oppression. I can assure you I am not oppressed. I respectfully ask you to stop patronising me and countless other women.

It’s much like SlutWalk. I understand and nod in agreement but personally, I am not looking to take back the word “slut” but I applaud you and wish you success on your march, because at the end of the day, you are fighting patriarchy and whilst we all might do it a slightly different way, as long as we are standing up, we are winning. But don’t you dare, Don’t. You. Dare. Say I am not a feminist or I am an enemy to the sisterhood, because I don’t do it your way. That sounds an awful lot like patriarchy to me.

The founder of FEMEN has said “Muslim men shroud their women in black sacks of submissiveness and fear, and dread as they do the devil the moment women break free” You are making a few too many assumptions in this statement, assumptions that make it difficult for non western women, in this case Muslim women, to partake or support your cause. You have reduced Muslim women to objects not by their bodies, but by presuming their thoughts and not entitling them to a voice.

This, has now created a counter-movement “MuslimahPride” who are protesting this assumption about their liberation. Rightly so, but here’s hoping they too are fighting the patriarchy within Islam and Muslim countries.

Muslim or not, western or not, religious or not. Here is a handy checklist for you to ensure your feminism is supporting rather than suppressing those it aims to “free”:

If the answer the above questions is yes, then by all means, grab a megaphone and get to work for your cause, but if the answer to even one of the above is no, take a long hard look at your methods and consider whether this helps or hinders the cause of feminism.

If we continue down this, very ignorant, oblivious road, we will turn feminism into a movement fighting within itself, whilst patriarchy flourishes. (Although I’ve written about this already!)

Also Read: 'Silence is a Sin' - Scottish Muslims Are Speaking Out - by Talat Yaqoob