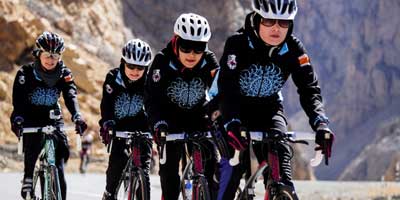 See full version of this article at patheos.com where it was originally published.
Abridged version published here with kind permission of the author.

Who doesn’t love stories and reports of young Muslims girls in Afghanistan, leaping through the air and landing on their skateboards?

The agility and passion for skateboarding is juxtaposed with general tomboy badassery, which is implied, is surprising to find in in their homeland. Their long, colourful dresses heighten the wonder of their athleticism. Protective helmets are carefully placed on top of their headscarves. As members of Skateistan, they stand for much sought-after photographs. Their faces bright with confidence, and a subtle joy.

They are a beautiful example of sportswomanship and progress for women in a country that has been devastated by wars, invasions and greed.

Empowered young Afghans flying through the air in hijabs is a very appealing subject. They tell a story of progress and hope. They are precious and simultaneously fierce.

And for lazy writers, a perfect opportunity to insert ridiculous and ignorant tropes about the oppression of Muslim women.

I commonly come across fantastic photo series or stories with dramatic titles or information in respect to Afghanistan and what is (im)possible, (im)permissible and socially (un)accepted for women in that region.

Despite the positive and honest depictions of young Afghan skateboarders, the presented topic underlines the whole “Muslim women cannot *insert activity* in Afghanistan – BUT look at these skateboarders!” This is how the story has appeared on Facebook and Twitter.

In both cases I refuted their claims and even provided reports and information regarding the inaccuracies.

In this particular case, the activity they are allegedly NOT allowed to do is ride bicycles.

Which I found even more frustrating as there *IS* an Afghan Women’s Cycling team. One of the team’s coaches and mentors is a friend of mine based in the US. I asked Kyleanne Hunter, over email, to explain the disservice caused by this type of misinformation being spread through mainstream media. I asked her about frustrations with media coverage.

She replied with an emphatic “YES.”

Kyleanne and her fellow advocates, including strong Afghan women and men, face many barriers and a show of proper support is imperative to their work. Kyleanne powerfully elaborates:

“Shannon Galpin of Mountain2Mountain has been a one-woman crusader getting the word out.  She recently was awarded National Geographic’s Adventurer of the Year for her work in Afghanistan.  Hopefully this will generate some more positive press. Let Media is also doing an incredible job with the documentary, Afghan Cycles.

That being said, the MSM (mainstream media) continues to perpetuate a narrative of the poor, unfortunate, helpless Afghan women.  I think that this is because it is something that the western world is comfortable with.

Afghanistan is different, so if we can paint them as culturally backwards and struggling, it provides a place for the western savior.  What these women are doing flies in the face of that portrayal.  These women are strong (both physically and mentally), self-sufficient, educated, and outspoken.

They also have families – fathers in particular – who are supportive of their independence and achievements.  I really don’t think the media knows what to do with a story like this.”

Click-bait pieces reaffirming the oppression of Muslimahs are often shared by prominent advocates from brilliant organizations that otherwise educate and advocate for the eradication of sexualized violence and rape as a tool of war. When such stereotypes are perpetuated by reliable organizations, it is highly problematic.

We would all like to believe that the sharing of the pictures comes from a place of sincerity, from allies for the young skateboarders. The reality is that such ignorant solidarity does a grave injustice to cyclists and the work they do. It undermines their efforts.

Most frustratingly, all that it would take in order for people to research Afghanistan’s culture of cycling would be…wait for it… a Google search.

In the world where integrity and honest journalism is fighting to stay alive, is that really too much to ask? Even a clarification or a correction from the offending outlets would speak volumes. Particularly as I made attempts to contact them directly.

My intention is not to shame anyone, but as a sports activist, I feel that when working with other women to try to advocate and shine light on the campaigns of female athletes all around the world, it would be helpful to have effective support. Women of Afghanistan’s cycling team have many physical and psychological challenges and demands – they shouldn’t have to deal with lip-service support.

There is truth to restrictions of women’s mobility in some Muslim-majority countries. No one is denying that. But highlighting the campaigns and teams of women cycling through barriers and speeding towards athletic triumphs, such as the first all-women’s speciality cycling store in the Middle East, or using bicycles as a means of societal reform and resistance, is what we should be doing.

Kyleanne explains that the bike has a long history as a tool of empowerment:

“I think that independence and achievement is important for all women and girls.  Not only are these women getting the joy of participating in a sport, they are shattering barriers, and allowing women to have access to bikes for transportation.

These women are truly pedaling a revolution of joy, strength, and independence.”

Kyleanne’s message to the media is to stop creating a narrative that perpetuates division between women.

“This isn’t a story of western women saving a poor, uncivilized culture,” she says. “It’s a story of a group finding their own place in this world and the joy from sport.  Cycling is one part of a larger sport culture that is re-blooming in Afghanistan.  The MSM seems to focus on the divisions between women, I would ask them to look for the similarities.”

We are all rooting for the precocious, young skateboarders of Skateistan and want them to succeed, but that will not be achieved through misleading the public with misinformation about just how bad it is “over there.”