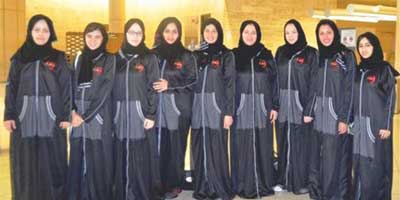 There is nothing more frustrating, as a footballer, than receiving a perfect pass from a teammate, sprinting down the sideline, deking around two players and before you can fire a strike, having a defender destroy your dreams of glory with their bulky and uncreative maneuvers.

Unless, of course, you count not being allowed to play in the first place because the local maulvi sahib said it is “haraam” for women to play sports.

It is not uncommon for Muslim women athletes to fight against cultural and religious patriarchy. In the last 10 years, news agencies have reported how women are prevented from competing in tournaments by a repressive ‘Islamic’ government or how some random cleric is denouncing their participation in athletics in any form.

Ladies, if you want to take to the field you need to shut out the noise and persevere

There was the case about Nour Fitiany, a 24-year-old girl in Saudi Arabia, who wanted to play basketball and represent her country in international tournaments and who was met with much resistance as girls in that country are banned from playing sports even in schools. Yet she now plays for a private women’s basketball club, a first of its kind in Saudi Arabia, the Jeddah United.

There is also the fine performance of female athletes from Iran in the 16th Asian Games in Guangzhou, China, in 2010 that was denounced by an Iranian cleric even though the country’s president was all praise for the girls, who had after all only participated in games where there was no physical contact with men.

We have heard it all before. Complaints range from “It is immodest for women to run and play in public!” to “her duties as a insert gendered role will be compromised” to “the attire is improper” to my personal favourite: “a stadium is no place for a woman!”

Yes, women have even been barred from stadiums for various sports, as in the case of Iran, because of perceived impermissibility and a masculine environment (a ban that is being reconsidered). Women must be protected, after all, and what better way to protect her than to obstruct her mobility and accessibility to public sporting events instead of ensuring a safe space and participation?

India Boxer - Mary KomMost recently, a football game in Malda, West Bengal was cancelled due to a certain maulvi’s staunch objection to women playing. The point of contention was not only that the clothes were objectionable but that the match featuring some of the women from India’s women’s national football team “would have adverse impact on the local girls and womenfolk”.

My first reaction was to lash out at the next bearded gentleman I saw, who unfortunately was my husband. But instead I decided to channel my frustration in a positive way and non-Roy Keane manner and write.

We are all aware of the perils of women and girls in India (for example), who engage in healthy lifestyles and excel at athletics. They become contributing members of society, role models, and inspire legions of young women. This becomes a critical factor when the men’s team loses consistently yet the underfunded and unrecognised women’s team persevere and continue to thrive. Yes, I am speaking of the beloved Shaheens.

Programs such as YUWA football and Skateistan, are incredibly successful programs that use sport as vehicle for promoting education of youth in high-risk regions. And the participants are free to partake in whatever clothing they prefer. Not all women and girls have access to Adidas shorts or Nike kits and adjust their uniforms to how they wish to play.

It must be clarified that not all Muslim countries object to women playing sports and enjoying recreational activities. There is quite a wonderful and relatively unknown tradition of Muslim women in Olympic and sporting history dating back to mid-20th century.

Joyann Geraldine ThomasAt the 2012 London Olympics, every Muslim majority country competing had at least one woman in their team. Even if Muslim women didn’t win any medals they were a source of inspiration for many young Muslim girls across the world wanting to take up sports. In the Pakistan contingent, there were two women — athlete Rabia Ashiq and swimmer Anum Bandey.

Not only did more women represent Turkey than men in the 2012 Olympic games, 12 Muslim nations chose women for the coveted position of flag bearer during the Opening ceremonies.

Why then, do some maulvis have an issue with women’s sports? Shahnaz Taplin-Chinoy explains: “Muslim women athletes are caught in the cross fire between faith and culture. If the latter is dominated by patriarchy, misogyny and tribal customs, the religious support for sports and good health is simply ignored. Muslim sociologists fight back by referencing Islamic sources in concluding sports for health should be mandated for women.”

It may not be the religion itself but efforts to control women by overzealous imams serving up generous helpings of misogynist religious edicts and societal pressure are there. This process is neither welcome nor necessary. And it is not what our women deserve.

Pakistan's Women Cricket TeamSport can help heal wounds in our communities, and as Joyann Geraldine Thomas of Pakistan’s women’s football team has shown, it creates opportunities and blows opens the doors of welcome change.

Having the opportunity to grow through sport shaped my life. It gave me strength and it propelled my drive. It also gave me the confidence to challenge orthodox opinions about the Islamic perspective of sport. And decide for myself as many women have chosen to do, with the support of their community and country.

I have grown up in communities where my supportive parents were advised to not let me play for implied Sharia reasons but mainly because my wheatish tone would darken. Ultimately the downfall for every girl. Unbeknownst to the well-meaning aunties and uncles, my priority was not landing an excellent catch or caring about the optics of my religious practice, but was to put the ball in the back of the net. I faced other challenges but by God’s grace and a biting resolve, I managed to persevere.

Ironically, the only interaction I have had with regards to women’s sport with the most religious man I have known had a fascinating result. I approached the imam of the mosque and asked to use the field behind to train a team of young Muslim girls for an upcoming tournament. It is a fairly conservative community and I figured some people would object. Practices were scheduled around prayer time. But I asked him for permission to use the field adjacent to the parking lot in the back anyway. I presented my usual spiel about the importance of physical activity and how our bodies are a trust from God, etc.

Imam Sahib listened patiently to my request. Then he smiled and said: “Of course you may”.

I stopped and waited for the other chappal to fall. It didn’t. I exclaimed: “Well, what if people complain about the girls?” He smiled and very slowly replied: “Beta, they don’t have to stay and watch.”

I was not expecting such a measured and sensible reply. If men are bothered by women playing sports, then they don’t have to watch. Brilliant!

Perhaps, fussy clerics who are of the opinion that “Islam does not permit us to watch women playing in the field wearing short dresses”, could offer a solution to all the poor men: don’t watch.