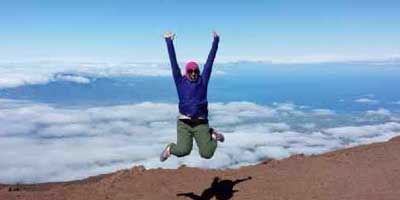 I have been an athlete my whole life. Since I started competing and playing, I was not taught to look to media campaigns for encouragement. It was of no use. There were simply no ads or images that I could connect with. Quite often I was the only girl of colour participating in sports activities in my schools and communities. My parents told me very sincerely that I could do whatever I wanted. I could play, hit, run hard. So I did.

It wasn’t until Mia Hamm blew me away and came out in a Gatorade commercial, with one of the the greatest basketball players of all-time, did I think about the importance of seeing a revered female athlete in an advertisement.

I was so excited about that ad. I recorded it on a VHS tape and I used to watch over and over. I loved her drive. Her confidence to stand against a much larger, taller man with humour and intensity was inspiring. Her positive messages were about working hard and giving your all. She disregarded gender tropes and she played hard. She won respect and she won trophies.

At that time I was so starved for positive messages from sportswomen in the mainstream that I did not expect anything much but was elated to have her being highlighted along with another superstar athlete. She didn’t exactly look like me but Mia was a soccer player, as was I. And she did not have blond hair, well,  neither did I. CLOSE ENOUGH.

Fast forward 20 years. There are improvements when including different women in campaigns while showcasing their badassery. I have been awestruck by the phenomenon that is Serena Williams and amazed by Paralympian Amy Purdy’s brilliance.

Different companies and organizations have come up with very spiffy and catchy ads to entice and encourage participation of young women. Most recently, Always (the feminine hygiene company)  has come up with a campaign #LikeAGirl which was lauded as a powerful and important message. And it was.

With one HUGE FLAW… none of the brilliant young subjects were of an identifiable ethnic group. They were all white.

I am not trying to take away from the importance of this campaign but I will point out that it wasn’t terribly inclusive. The #LikeAGirl ad is supposed to remind adults that girls are strong and brave and brilliant. But just white ones? My daughter is not white. She is strong and brave and perfect. I burst with pride every single time she steps on the court or the pitch. And on her own basketball squad, out of 12 girls, there are only two who identify as white. Not only does this ad not represent my daughter and her teammates, it seems slightly out-of-touch with reality.  In essence, what I get from this campaign is that neither she nor I nor any of the wider community need any support.

Another glaring problem with this is that the campaign doesn’t actually reflect the tonnes of athletes who are women of colour. In support of the ad, Canadian soccer player Stephanie Labbe tweeted a wonderful pic with her teammates. Her picture features bright and strong women of different backgrounds and races. It really is simple. Particularly when athletes are providing major ideas as to how campaigns should be developed.

The difference between advertisements and media campaigns being presented as advocating for sport, is that the commercials might target a certain audience in order to peak their consumerist habits while campaigns should reflect a larger demographic. In this case, the #LikeAGirl campaign reads more like #LikeAWhiteGirlCan.

I coach a community of different girls. And have mentored and encouraged a variety of fabulous athletes. For me to encourage one set based only on their ethnicity is disingenous and ridiculous. I am not sure who was consulting Always on their campaign but perhaps they should have a follow-up. In an era where Mo’ne Davis is on the cover of Sports Illustrated and  blowing the tops off of records and achievements, was it really that difficult to conceive a young girl of colour in a three minute spot? That she could drill the point home that yes, in fact, young girls of colour CAN and WILL beat gendered-stereotypes about athletics.

There are also intrepid athletes such as Ibtihaj Mohammed who has been a pillar on the USA Fencing Team, with her headscarf. She is certainly an accomplished athlete young girls can look up to, that any campaign should point to. But wait….she is a Black Muslim woman. That might not fit the bill of a campaign trying to encourage athletics in young girls.

Across the pond, the situation is slightly better. But as a Muslim woman of South Asian descent, I have had the privilege to connect with other athletes, academics, advocates, sports journalists, writers , administrators and sport activists from around the world who study and work on Muslim women and women of colour in Media and sports. There isn’t really a tremendous group of us.

A new campaign initiative from ThisGirlCan UK features a fabulous track from Milly Elliott and shows different women exercising and training. It’s a great start but there was the notable absence of South Asian and Muslim women which I found really shocking. For the UK? And when I tried to engage in a discussion on this issue, again, I was met with “ad focuses on barriers”.  Right. Because young Muslim, South Asian and Arab women have no issues with barriers when it comes to accessing sports.

Hopefully, the issue will be met as the campaign continues and there will indeed be a wider range of women featured.

Otherwise South Asian women will just have to resort to watching “Bend It Like Beckham” in order to reinforce that we CAN and SHOULD participate in something healthy and in which we are skilled. For the record, ‘Bend it Like Beckham’ is actually one of my all-time favourite films.

Visibility is crucial when reaching out to communities and encouraging women of all ages and backgrounds to connect; to look at something and recognize commonalities is important for young women all across the board. It is as important for them to see so many different athletes from different parts of the world and know they can be them. One of the most consistently poignant examples of teaching my daughter is having her attend my own matches. She watched and this reaffirms that despite the politics and the bureaucracy, there is a place for me, for us, on this pitch. And so I end up representing myself and what my daughter can be, by myself.

I have already been challenged online for my comments and have even been advised to “have a more optimistic view on life”. Perhaps that will help me get over my issues with lack of visibility of Women of Colour in sports campaigns. I refuse to back down. I play hard. And I will rally for this until my last breath.

I expect more from agencies or campaigns that are supposed to speak to all women, young or old, and of every imaginable colour. I expect better from sports writers and critics to recognize and point out these injustices. I expect brands to include girls and women of varying levels of ability in positive ways in social media campaigns particularly when those campaigns focus on healthy living and wellness. I expect them to include all women and girls including my daughter and her friends who are watching #ThisGirlCan and #LikeAGirl and they are reflecting.

Because MY girl, and countless others, also “can”. And despite the odds, I did.