Why was one of Africa’s greatest athletes forced to strip naked? 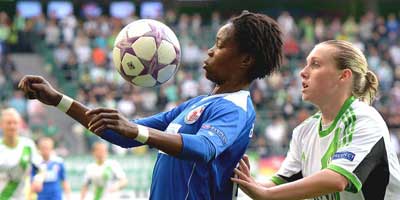 Genoveva Añonma, Captain of Equatorial Guinea’s National Women’s Team is a powerhouse on the pitch. Currently playing for FFC Turbine Potsdam in the Bundesliga (for whom she has scored 51 goals in 58 appearances), Añonma was named Africa’s Female Footballer of the Year in 2012. But recently the sensational footballeuse revealed she had been engulfed in a slanderous scandal — accusing her of being a man — that arose after her fantastic performance in the 2008 African Women’s Championships.

In a recent BBC interview, Añonma disclosed that she was subjected to cruel, forced gender testing by the Confederation of African Football (CAF) — the same governing body who later feted her with an award.

A former Mamelodi Sundowns player, Añonma describes how she was made to strip naked in front of CAF and Equatorial Guinea team officials: “I was really upset, my morale was low and I was crying. It was totally humiliating, but over time I have got over it.”

This violating “procedure” not only goes against basic human decency, but it may be contrary to FIFA regulations.

Jiji Dvorak, former Chief Medical Officer at FIFA, stated that gender testing requires a team of experts including a gynecologist or urologist, an endocrinologist, a psychologist and a sports specialist. The athlete is examined in a manner “to protect the dignity and privacy of the individual and also to ensure a level playing field for all players.”

Demanding that Añonma drop her pants at the convenience of CAF officials, isn’t exactly protecting the dignity of a cherished player. Although she pleaded for a proper medical test at a hospital, her request was denied. And she was bullied into a horrific situation of abuse at the hands of CAF officials.

Sadly, she has battled rumours, abuse and accusations for years. Football officials in Germany have categorically denied that she is a man. Marcus Etzel, President of her former club team, Jena, publicly declared: “It’s completely absurd. Of course Genoveva is a woman and we are very happy she plays for us.”

Añonma faces constant criticism because she is an athlete of the highest calibre and targeted because she does not conform. She has maintained that “these accusations come because I am fast and strong, but I know that I am definitely a woman.”

Officials and administrators in football are supposed to be advocates for the beautiful game and for footballers — irrespective of gender.  But the treatment of female players with regard to gender testing is deplorable. Officials have no boundaries when it comes to shaming female players. Añonma was awarded African Women Footballer of the Year in 2012 and her male counterpart was Yaya Toure. Unfathomable to think that if there were any pressing medical queries that Yaya Toure would be commanded to strip naked in front of a panel. Women footballers are not the only athletes to be thus treated, there is a history in sport of vulnerability of female athletes to cack-handed gender testing.

Anonma was forced to do so because she is a woman and her dignity was disregarded. It is unfair and unacceptable and also unsurprising. Football is rife with sexism and gender inequality. It is no surprise there is little support from management or officials. Particularly when Sepp Blatter, President of FIFA, is a notoriously cretinous figure who continuously makes ridiculous sexist statements.

A certain amount of misogyny is expected when ridiculous comments from coaches, players and top-officials, to salary inequalities to misogynist practices and violence apologia to even more horrific and violent attacks such as corrective rape of footballers in South Africa are rampant. There are few officials voicing the need for change in football culture.

Football can be an aggressive game and has full contact competition. Women play but are often treated as second-class players despite their achievements. Perhaps officials feel that women can handle the torment and emotional distress of such form of testing. Or it could simply be that they do not respect their female athletes and subject them to horrendous forms of control and power- as in Añonma’s case, gender testing.

Gender testing is not uncommon in football, particularly in cases of exceptional talent in the women’s game.

Last year the Football Federation of the Islamic Republic of Iran (FFIRI) decided it would begin random gender testing by medical teams at football clubs when it was discovered that four players on the women’s national team were transgendered women who had not completed reassignment surgery.

In 2013, Korean superstar Park Eun-Seon was accused of being a man because she scored 19 goals in 22 matches.

Unlike CAF, team officials at Seoul City Amazon refused to further humiliate their player by even addressing the accusations. They insist that it is a conspiracy against the brilliant, androgynous player because she had improved so quickly after a ‘slump’. Eun-Seon had participated in the Olympics, internationally and had already undergone required testing.

Likewise, in Añonma’s career, initially it was suggested that her opponents had “evidence of an inferiority complex” and then accused her. But she was violated nonetheless.

Even after the scandal made international headlines recently, Africa’s Top Female Player of 2012 has not received an apology. Nor will CAF comment on this case. Quelle surprise.