Helena Costa: Paving the road to the Future of Football 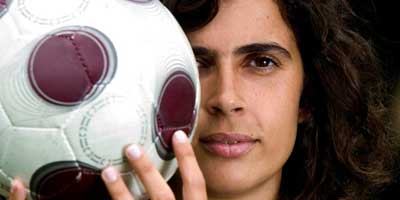 “Working in professional football is a dream for me”- Helena Costa

When Clermont Foot 63, a French Ligue 2 team, currently in 14th place in the standings, announced their new Head Coach recently, they made history.

The new head coach is a 36 year-old Portuguese football genius and a sport science graduate, a former Benfica youth team trainer and mentor and an experienced scout who worked with for Celtic Football Club in Scotland from 2008-2011.

She also happens to be a woman.

Helena Costa will replace Regis Brouard who has coached the team since 2012.

This is the first time in the history of French football that a woman has been selected to coach a men’s team. In fact she is the first woman to coach a first or second level men’s team in any of Europe’s top five leagues.

She helped navigate the team through, despite the process of lobbying for allowance to wear hijab on the pitch. The ban was officially lifted in March, 2014.

Some in the football media have dubbed her “Mourinho in a petticoat” as she was under the tutelage of Jose Mourinho when she worked with Chelsea’s women side and the Academy in 2005 during Mourinho’s first tenure at CFC.

Her competitive nature and desire to succeed should put any monikers to rest and, moving forward, she should only be regarded as the consummate professional and UEFA ‘A’ licensed coach that she is. A sentiment that was echoed by Celtic Spokesperson: “We would like to congratulate Helena sincerely on taking up this new role. She did an excellent job for us and we know she will give her new position the same high level of commitment and dedication which she gave to Celtic.”

She counts Pep Guardiola and Jose Mourinho as her coaching role models.

No need for excessive applause - "I'm ready. I sleep well with the pressure".

The news was welcomed by France’s Women’s Minister, Najat Belkacem, who tweeted: “Bravo Clermont Foot for understanding that giving place to women is the future of professional football”.

There is no need to excessively applaud Clermont for selecting a woman for their top job. They selected the best person for the position.

Clermont players are not anticipating any issues with regards to the new boss. Defender Jaques Salze has stated that her appointment is not ‘revolutionary” as they already have a female on staff as the team physiotherapist.

Costa is used to having to prove herself in a field that is dominated by men. Her experience with Benfica taught her that. “I think it will be the same [as Benfica], but of course professional football can have a lot of interferences, so it can be different because of that or more pressure because of that. But I’m ready. I sleep well with the pressure.”

Looking forward to seeing their progress on the pitch.