Shireen Ahmed: Veils, Sport and the Value of Dialogue 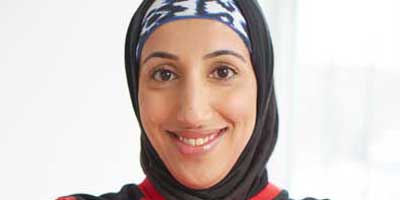 I have a tale to tell. It’s a story about a youngish Muslimah woman of colour who happens to be a football fanatic. Synopsis: She comes across #hijabdesk-worthy Kickstarter initiative and critiques the project of two, privileged, white women working in Africa.

You may think you know what happens next: said woman was ignored, as were her comments, questions and suggestions – as many of the voices of WoC are, until a nifty hashtag is unleashed and the “need” for our voices arises. Platforms for people of colour, women in particular, are limited, despite social media exploding from events that infuriate and (deservedly) require critique from minority groups and individuals alike.

But, in this case, you would be wrong.

Getting back to story, the Muslim woman, we’ll call her “Shireen,” was contacted regarding a documentary film project about female footballers in Zanzibar. The project was requesting donations in order to cover filming and production costs.

Shireen saw the tweet, immediately checked out the video, and grimaced.  She did a quick Google search on the women. She was pretty mortified at the title of the film: “Veils to Cleats”. *shudder*

As a hijab-wearing athlete by choice, Shireen found that the inference by the filmmakers that one could only have access to sport and participate after unveiling made her stomach turn. Although she was not familiar with the local female football culture in Zanzibar, the whole world was aware that after much deliberation, IFAB (FIFA’s governing body) had agreed to strike down a law banning hijab.  Anyone with a computer and the slightest interest in International Women’s Football knew this to be the case.

Truthfully, our protagonist was not terribly hopeful that there would be any reply. But she found the project on Facebook and she emailed the filmmakers, introducing herself, expressing concerns regarding use of the word “veil,” and asking a few specific (pointed) questions. As this was a Kickstarter project that was already launched, she really didn’t think there would be a positive outcome. Or any outcome. She waited for the *crickets*.

Shireen had had very few, very very few, experiences in her exchanges with white feminists that left her feeling like their perspectives was nuanced. Like some horrible comedy, she was accustomed to reading about and hearing the stories of Muslim women in mainstream media from practically everyone BUT Muslim women.  There were the attacks (can’t bring myself to insert a link by Pam Geller, Ayan Hirsi Ali or other trolls) and equally frustrating, unwarranted defences.  (Sadly, white women are seldom the only ones to disregard the voices of Muslimahs.)

Much to her surprise, a reply came swiftly and politely. It thanked her for her comments and told her that her feedback was appreciated. She nodded and thought, “Well, at least they replied.”

“Dialoguing” is a great term used to describe the exchange of ideas between parties. It’s also a rarity. In Shireen’s limited experience on social media, such “dialogues” often involve challenging self-proclaimed “experts” (such as a white man lecturing [mansplaining] Muslim women on hijab) and then having them insist their opinions are correct as they mock you.

She also prepared by mentally ‘rolling up her sleeves’ in case she needed to fight. This was personal: Muslimah footballers. This was a part of her; so personally, so deeply.

When she was contacted again on that same day by the filmmakers, it is fair to say she was gobsmacked.

The filmmakers decided to take her feedback into account and seemed very genuine about sharing the stories of the women. They told her she gave them a lot to think about, and that they wanted to be careful that their project, which they were pouring their heart and souls into, could not be construed as offensive. It’s the last thing they wanted to do.

Shireen wrote back, fingers flying, with some more ideas and suggestions. Despite the time change, they replied right away again. She tried to suppress excitement. No need to get ahead of ourselves here. But wait…could it…would it…. be a dialogue? An honest-to-goodness sharing and sussing out of thoughts, perspective, detailings in mutual respect? Without one party patronizing or being sarcastic and condescending? Between a Muslimah and two white women working in Africa?

Honestly, she felt a Christine Sinclair in this:

She thought she could feel the “feminist goddesses” smiling from the heavens. (Just kidding. I realize this is a shirk-free zone.)

In one of the replies, one of the filmmakers shared her blog, publicly acknowledged the criticisms, and explained how they receiving them was difficult. This is after…*wait for it*… an apology. At this point, Shireen was a little out of breath. Not only had they discussed how this journey is an on-going process of learning but they offered recompense for offending (*pause- MINDBLOWN*) and also penned their ideas on how to change the title. Yes, they would actually change the title of their project.

She did the one thing intrepid, intelligent Muslimah writers do. She called her editor for guidance. (*cue accolades*)

And she needed to check her own privilege.

She replied that a personal apology was appreciated but not necessary. This wasn’t about HER. It was about the formidable, courageous footballeueses.  She stated that her help was limited but that she could offer resources, her own feedback on the project, and perhaps some contacts in the area. She was a Pakistani-Canadian and the subjects of the documentary were women in Zanzibar. She had struggled with being banned from use of her scarf but they fought through different types of judgement, public opinions, and personal issues in order to play. Their struggles, although parallel, were not the same.

Shireen was reminded that the response of the filmmakers was sincere and it was right. For them to be open and reflect on her suggestions was unprecedented. That she heard them out instead of firing first was also important and probably helped in working towards a positive result.

This journey is an exercise in learning about communication. For all.

It’s about smashing assumptions and perhaps having our own biases challenged.

She was not expecting Megan and Katie Ty to hear her concerns, let alone change the name of their project. Which they have done (see Update #3), showing an incredible amount of humility and eagerness to learn in the process.

As excited as Shireen was about the process, this story should actually be the norm: women, regardless of race, religion, culture, or sexual identity, sharing and working together, checking privilege, hearing the others without projecting their own biases. That an incident of reciprocity and sharing is so uncommon that it warrants a blog post is a bit sad.

Shireen is by no means hanging up her cleats from the field of critique or challenging women and men who are reductive and exclusionary. And she still often feels like this: 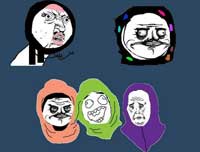 But she will keep pushing for platforms for women that acknowledge agency in various perspectives.

The story is not finished. There is no lauding anyone’s bravery or appropriate reaction. There is working and educating.

There is also, however, accepting maturity and remembering that learning is for everyone.

There are no sheros in this except the amazing athletes who have been eagerly waiting to tell their stories of sport, sweat and challenge. And Shireen can’t wait to hear and see those women speak, dribble and score via the awesome documentary Veils and Cleats.

So, the journey continues. And it is possible she has picked up two football-loving allies on the way.