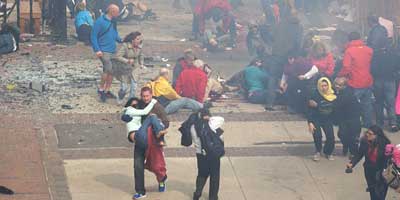 “I felt the first bomb in my chest. it was so powerful. thanks for thinking of us”...   Chris and I play together. She is my teammate and my friend.

Like the rest of the world, I was shocked and horrified when I heard (via Twitter) about the explosions at the finish line of the Boston Marathon.

I was so stressed and immediately thought about my dear family and friends in the area. Despite warnings that cellular service was shut down I immediately started texting and calling them.

Because they are so wonderful and caring they all replied within minutes to assure me that they were safe.

My younger cousin, absolutely dashing and charming fellow whom I adore, works in downtown Boston. I called my Aunt frantically to ask about all of them. By the Grace of God Almighty, my cousin was sick today. And he stayed home. I have never been more thankful for a flu and fever of a family member.

I was waiting to hear back from another friend living in the area but then I was reminded she was in Mexico.

A very close friend messaged me back to also let me know she was OK. I didn’t expect a long conversation and was so, so relieved she and her family were alright.

She had been downtown with her sister and sister's children.

Over 500,000 spectators and volunteers assemble to watch the magnificent annual race.

I thought about the kids. I thought about when my children come to cheer me on when I run a local marathon (10k) every year. They stand with signs and banners and scream my name as I push towards the end.

To my horror, my blackberry started going crazy when a few members of my football team started emailing to inquire about Chris.

Out teammate was running in Boston.

I texted her and her husband not expecting any reply.

It was the longest six minutes I have experiences in eons.

Rich texted back to say Chris was running, just finished when the bomb exploded and they they are “trying to get out of Boston”.

I thanked him and just said “Be safe”.

Their daughter plays basketball with mine.We have spent countless hours together. Chris and I play together. She is my teammate and my friend.

She texted me as well about 30 minutes later to say “Hi. We are both good. I felt the first bomb in my chest. it was so powerful. thanks for thinking of us”.

I sent out a short message to the rest of my team. I exhaled. Then I went numb.

It hit me how close she was to being hurt. WHY would someone do this?

Then I got angry. I was furious. WHO DOES THIS?

These people are athletes FOR GOD’S SAKE! They come with no political agenda. No motive. They are dedicated; work and sweat for this event.

They are surrounded by family, friends, supporters, trainers, tireless volunteers and event staff.

The incredible athletes and runners committing to 46k of arduous athletic activity.

They have trained for months; physically, mentally and emotionally.

They are drained and just exhausted at the end.

And they are met with explosions. Fire. Fear. Chaos. Injury.

An 8 year old child is one of the two reported dead today. Over 100 people injured and thousands traumatized.

Some of the runners were participating to honour the victims of the Newtown School Massacre.

I had no words.

Then I stopped. I knew who would be blamed: Muslims, Arabs and people of colour who could be incorrectly identified as Muslims.

People that could be identified and suspected to be “terrorists.”

“Terrorists” is a specific group of selected races, who will suffer, be discriminated against even though there is no concrete explanation or idea why or who did this.

I said to myself along with thousands of other people: “Please don’t be Muslim”.

Same reason I hesitate to wear a weighted vest when I train outdoors.

Because I am a South Asian, Woman of Colour who chooses to wear hijab.

Same reason my husband is routinely stopped at the border.

He’s lived all of his years (but two) in this country as a law-abiding and full participant in Canadian society and he has a beard and kufi.

We both fit the fearmongerer, racist, and ignorant description of “terrorist”.

But we will be judged.

So will our community.

So many of my friends, teachers, scholars have already tweeted, facebooked messages of support and prayers for the victims and their families.

Worst part is as a Muslim, runner and athlete, although I am furious and devastated by this tragedy I will not be surprised when hate is flung my way; my community’s way.

It has already begun.

We are programmed to feel responsible and apologize for the heinous crimes of those who do not share our values and opinions.

One of my friends wrote on his facebook regarding the suspect(s) being Muslim or not : “Does it matter? If it turns out to be a Muslim, then Islamophobes will basically have an “aha!” moment, and if it’s not a Muslim, then pundits will spend countless hours trying to figure out what kind of deep psychological disorder would lead a person to commit an act so barbaric that they might as well be a Muslim.”

It feels so frustrating that it may be a ‘lose-lose’ situation. For innocent people, for different communities, and for sport.

There are also people who remind us of similar atrocities around the world. The next day, in Iraq a bomb killed 42 people.

When we read comments such as “This happens in Iraq, Afghanistan, Syria and Palestine all the time” it is not to diminish the severity and loss of this act of violence.

For me it is a cognizance that I am privileged. I am strong enough and able to say that this is wrong. And I want no part of this violence  identifying me, my family and my beliefs.

Also a reminder that Muslims have acts of terror committed against them.

Muslims are part of Boston.

I am constantly reminded how lucky I am to be able to play football freely, to run publicly without fear of danger.

I am so grateful so be safe.

The stress and anxiety I felt trying to contact friends today was unbearable.

To live in that stress all the time is unimaginable.

And it happens to many innocent people around the world. Daily.

The Boston Marathon is an event that should inspire people. That united people of different religions and races together.

They are vulnerable, terrified and in shock.

Bostonians are warm-hearted, generous, and kind. They have opened their homes and offered to help in any way possible. Shelters, places of worship, and crisis centers are offering any type of assistance. Even to use the bathroom or make a phone call.

Emergency services responded in a manner most honourable and courageous.

Whoever is responsible for this will undoubtedly be punished.

But may that process of “American Justice” not oppress and be misguided and blinded by hate, fury and racism.

And more than anything “Please don’t be Muslim” also translates to “May my rights not be stripped, disregarded, and ignored”.

That in itself is terrifying.

May the people of Boston recover from this nightmare.

May their efforts to recover be supported and respected.

May they be lauded for reacting with generosity and kindness and concern for strangers.

And may we all run in safety and security.