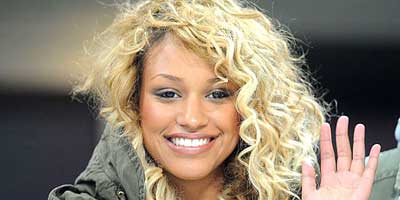 Fanny Neguesha - girlfriend of Mario Balotelli - targeted by the media in vicious, false rumours. Sadly, debunking the garbage story did not garner as much attention or spread as rapidly as the initial story. Photo source: Tumblr

By Shireen Ahmed - Global Sports Correspondent for Safe World. May 2013

Football reporting is ripe with sexist culture. Salacious details of players and their intimate lives are regularly offered up by countless sports outlets and unflattering stories of their ‘lady friends’ emerge. Now that United Champions League fever is in the air it seems as if football media is in heat for unfounded trash.

The two Spanish teams, Real Madrid and FC Barcelona (considered two of the top clubs in the world), were mercilessly mocked after losing recent matches and later failing to go forward in the series. One of these stories emerging from the Spanish media outlets (AS and Marca) was that of Italian footballer Mario Balotelli, reportedly announced to the Real Madrid squad: “Win and you can have sex with my girlfriend”.

Wait- WHAT?!?!? He promised his girlfriend, Fanny Neguesha, to the other team if they made a comeback and won a football match? No, but it gets uglier.

There is maddening objectification of women, sexualization of football supporters and reductive attitudes towards their contributions in sports journalism.

Obviously, the best way to combat sexism in sports is to patronize women or deny that such a culture exists at all- where by ignoring the voices of intelligent people.

Female athletes, journalists or even the partners of Superstars, women are not always spoken kindly of nor highly regarded in the world of football.When superstar squad of Real Madrid, faced a crushing defeat, the rumor that Neguesha, Balotelli’s girlfriend will be permitted to have sex with the entire squad penetrated the football world. Was it industriously circulated to motivate a struggling team? The most obvious way to congratulate a team that makes a comeback: offer your model girlfriend. Did journalists find it humourous? No compulsion to fact-check? Media would have us believe this smut.

Cheap tabloid-esque papers such as the Mirror and the Sun from the UK are not known to always be accurate. The rate at which this story exploded through the small, global football community was staggering. Even sites in the US carried this news not to mention the whole debacle went viral.

Real Madrid did not win against Dortmund but during the game Balotelli’s comments (REMEMBER ALLEGED OFFER IS OF A *WOMAN*) swept through social media.

Even the some commentators were cracking jokes such as “Mario’s girlfriend will sleep comfortably in her bed tonight...”. Thanks ITV. Just stick to your less-than stellar observations of the game.

Brooks Peck, a lead journo from reputable Yahoo soccer site Dirty Tackle reported that the story was a fake. Sadly, debunking the garbage story did not garner as much attention or spread as rapidly as the initial story.Balotelli is famous for his colourful commentary, personality and unapologetic behaviour. He is black. His girlfriend is black. And apparently white-dominated football media thought this unfounded story was OK to share. There is history of Italian media dismissing racism and unsupportive attitudes towards non-white players- Balotelli in particular. There is also the prevalent attitude by white, male journalists that the issue of racism in football is being “blown out of proportion”. Ludicrous. Racism that has reared its ugly head so often that FIFA, had to create an Emergency Task Force on Racism and Discrimination.It’s totally OK that this tale of misogynist behaviour targeting a woman of colour companion of a sportstar will go unnoticed beyond several hundred memes and rude jokes.

It is these nonchalant attitudes that are disgraceful.

I certainly hope Balotelli and Neguesha decide to sue the Spanish media, known to be ruthless and racist, who industriously circulated the story. There is a strong case for defamation.

AC Milan, the elite sports club, issued a statement that their player made no such comments to any news organization. AC Milan’s public and very direct involvement has taken the matter to another level.

Stories that Balotelli had broken up with his girlfriend and was already chasing new women still emerged around the time that this story “broke out”.

Mario Balotelli is considered as football’s Dennis Rodman sans-diplomatic skills. Understandably a player this recognized and adored, will have their actions used as fodder for gossip rags. But implying that he would offer his girlfriend to a struggling group of 11 men is cheap, misogynist and far below the often sub-standard of sports reporting. If the culture of disrespecting women is going to stop, it must begin with media taking responsibility for these disgusting claims and listen to the women who are addressing such issues.

Mario Balotelli and Fanny Neguesha both deserve public apologies and retractions- from every site that offered this tripe.To infer that women are possessions of men is demeaning. To joke or lie about it is a form of apologia. It’s not sports journalism- it’s vile.