Shawana Shah: My Visit to Swat - The Beautiful Valley of Brave People 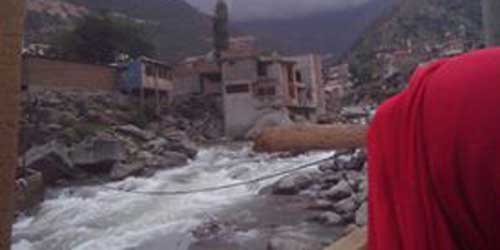 When most people think of the Swat Valley of Pakistan, they will conjure up images of the Taliban and terrorism and of the subsequent ‘clean-up’ by the Pakistan army.
The Swat valley is also where the attempted assassination of Malala Yousafzai happened in 2012.
And so it was with some nervousness that I agreed to visit the region in August as part of my work with the KPK Working Women’s Union.
What I discovered was a renewed sense of optimism and hope amongst the people – especially the young activists and peace-makers.

The visit came about when I was invited to visit by a friend I had met on a Peace Traveller visit to Punjab, earlier this year.

The journey to the Swat valley takes about four hours from where I live in Peshawar.
As we started to get closer to the Behrain Valley we were struck by the beauty of the region.
High mountains all around, between which flows the River Swat. And the air is so cool and fresh.
It was a long journey and we took some time to relax and enjoy the scenery.

The following day, we left the hotel and went out to a meeting with a local women’s group.
There were about 30 women present, all different age groups and all were working. Some were teachers and health-workers while others were home-based workers. Two of the women were elected representatives on the Behrain council.
They were all very proud of the fact that literacy levels are high in the area. They also said that levels of understanding of women’s rights are strong too.

More suprising perhaps was that there was a lot of support from the men for women’s education and training. Most of the young girls present were employed by the government or in non-governmental organizations. Everyone was in favour of peace.
The meeting was a great success and the women happily signed up to join the Women’s Union.

We next moved onto Mingora, the main city in the Swat valley. Unlike Behrain it is more urbanized and populated. It is also the town where Malala was shot while in a school bus.

In Mingora the people we met were different. These were peace-activists who had directly suffered under the Taliban regime. Mingora itself had been under direct Taliban control and dissent was not allowed. Education suffered and several members of this small group of men and women had had family members killed.

However, their courage and positivity was extraordinary and infectious as they talked about their dreams and hopes for the future.
Although the visit was short, we all came away inspired by the strength of the people of the Swat valley. Having suffered years of oppression and violence, a new normality was settling in where a new generation of forward looking, empowered people - both men and women - are working together to build a new future.