How Social Media Is Saving Lives In Nepal 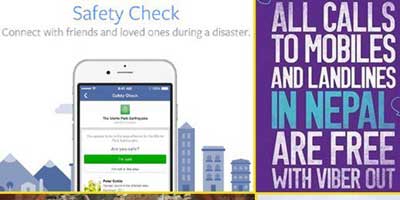 This blog was originally published on the Express Tribune Blogs

It wasn’t too long ago that Kathmandu, Nepal was viewed as one of the most beautiful, and most historical, tourist destinations in the entire world, only to see it suddenly and very tragically crumble in a mere blink of an eye, as one of world’s most deadliest earthquakes rampaged the country this past Saturday. Millions of lives were affected, by the massive 7.8 magnitude earthquake, with many trying to find ways to flee the nation, as the death toll rose close to 5000, with several thousand injured.

Although Nepal is no stranger to natural disasters, an earthquake of this magnitude was extremely shocking and unexpected; as a matter of fact, it’s been more than 90 years since a disaster like this has ever occurred in the country. And it’s truly and utterly heart-breaking having to read and see news reports after news reports, informing us of the rising death and injury tolls as more bodies, women, men, and children alike, are discovered beneath the rubble and devastation.

The earthquake, albeit not the first of its kind, has plunged the whole nation into chaos and despair, as people come to terms with the horrid reality of what happened. Not only did many lose loved ones, but they also lost their homes, rendering them homeless as they anxiously wait for more quake relief. And there is no worse feeling in the world than to helplessly watch these people suffer, from the comfort of our homes, without being able to help them physically. It’s bad enough that disaster relief has not been as smooth as it was hoped it would be, as there were some challenges in getting aid into the country, especially to the more remote communities that desperately needed it the most.

Yet, what human beings faced as a challenge, technology was able to overcome – especially in the form of social media applications. From Facebook pages and groups to effective Twitter hashtags like #Nepal, #NepalEarthquake, #NepalQuake, and #NepalQuakeRelief to Google apps like ‘Person Finder’ to Viber – they have all contributed in some drastic way or another, to providing connections and relief to the Nepalese. As a matter of fact, Viber has also provided free calls to Philippines – a service which was not provided otherwise – when the country was greatly affected by the Typhoon Haiyan, back in 2013.

There is no doubt that social media has made it very easy for us to be connected to each other in meaningful and effective ways. And while I realise that social media may have some downsides, it is, for the most part, a very convenient and effective tool. As a matter of fact, since the aftermath of the quake, social media platforms have become the primary means of communication for survivors, aid workers, various agencies, and even the government. For instance, since the quake hit more than three days ago, Twitter alone has already registered over 4.1 million tweets, using the relevant hashtags. 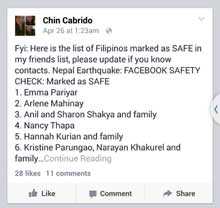 Additionally, Facebook’s Safety Check application, which was just launched last year, has also been quite effective in connecting those that are still missing in Nepal, making it easier for the government and other relief agencies to accrue resources and effectively carry out rescue and relief efforts. While I have personally never used Facebook’s highly effective Safety Check, I know a few friends and acquaintances that did. The screenshots depict how exactly effective the app has been in the Nepalese crisis.

It seems that most of the monitoring, of both the survivors as well as those that are still missing, is being done through social media. And it appears that Twitter is further attempting to shift the focus from simply hashtags to the actual coordination of saving lives through effective relief efforts, as one spokesperson from Twitter said,

"The next priority is to work with local agencies, such as @InCrisisRelief, to help manage relief efforts (including volunteers, food, drinking water, shelter, medicines, clothes) and donations to reach the affected people of Nepal and India." 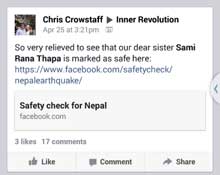 Hence, social media is, in a nutshell, quite spectacular. It is revolutionary. It has changed the way we view the world, and the ways in which we interact with each other. What started out as a simple means to keep in touch with people (whom you hardly get to see) to meeting new people has now evolved into helping and saving lives.

Social media has indeed come a long way. And I couldn’t be more grateful.

May the people of Nepal find the strength and patience to get through this extremely difficult time, and may we all continue to help out in any little way we can. After all, technology is there for the taking; let’s all continue to utilize it to the best of our abilities.