Hashtags Are One Of Most Important Discussions About Domestic Violence 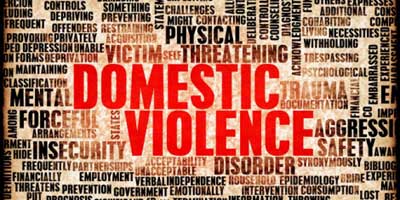 Over recent weeks social media, especially Twitter, has been taken by storm with the hashtags #WhyIStayed and #WhyILeft, in which exceptionally brave women, who suffered various forms of domestic violence, have come forward and shared deeply personal stories in only 140 characters or less, creating so much impact that it urged and encouraged more and more women to come forth and share their heart-breaking stories as well. It has almost become like a domino effect, as story after story were relayed (and are still being relayed/shared), depicting the horrid reality of issues that are more than too often simply swept under the carpet.

Nevertheless, this extremely important discussion about domestic violence did not just peak out of the blue or on a whim, it was actually triggered by a leaked video that was released by TMZ on Monday morning [8th September], which depicted the former Baltimore Ravens Star, Ray Rice, violently attacking his then fiancée Janay Rice (his now wife), knocking her unconscious before dragging her out of an elevator. And while I haven’t seen the video, the description of the brutal attack on this innocent woman is enough to elicit infinite anger and rage at this beast of a man, and make one cringe at the fact that the woman he knocked unconscious still found it in her heart to love him enough to marry him.

Of course, it would be very unfair of me to pass judgment as to why Ms. Rice still went ahead and married him, despite the horrible way he treated her, but it goes to show that women who choose to stay in abusive relationships has a lot more to it than what meets the public eye. And this is exactly why the #WhyIStayed hashtag bears so much significance, because it shows us that while it’s easy to say that one should just pack up and leave a relationship at the first signs of abuse, it’s never as easy as it looks or sounds. Even those with lived experiences know that leaving a relationship, where you truly love someone is never easy, especially when the abuser starts making “promises” that he will change or that he will never hurt you again. Many women can’t help but feel hopeful that the person whom they “love” will actually turn a new leaf, that he will never hurt her again, and that he will love her as much as she loves him. No doubt that blind hope is dangerous and self-destructive; yet, some women can’t help but fall into that cycle, making excuse after excuse for their abusive partner’s behaviour, until some finally find the strength and courage to leave. Needless to say, not all women are fortunate enough to leave due to religious/cultural barriers, strong familial ties, lack of independence, lack of economic means, as well as the social stigmas associated with being a divorced woman.

Conversely, the #WhyIStayed and #WhyILeft hashtags are even more important now than ever, because it gives a voice — and a very loud one — to women who have managed to remain silent for so long. It doesn’t matter whether these women used their real or fake Twitter accounts, or used a pseudonym, the fact of the matter is that the women who voiced their stories hailed from all cultures, creeds and backgrounds, throwing all caution to the wind, as they shared experiences that were bold, raw, and tearfully painful. And, even though, personally, I will never understand the physical, emotional and mental trauma that ensues from domestic violence, I do actually personally know quite a few women who have struggled with it, especially those who hail from the same cultural background as myself (Pashtun). And these women don’t necessarily live back home, in Pakistan; these women live here, in Canada and the United States — in the “modern” west — where they find it so incredibly difficult to just pack up, grab their children by the hands, and simply walk out of the marriage. I realize that those of us, living in the “privileged” west, quickly jump the bandwagon and assume that the reason women, who live “back home” (Pakistan, Afghanistan, Bangladesh, India, etc.) are unable to end the marriage/relationship is because they are afraid to leave, or that they are not independent enough to leave because they are illiterate and depend on their husband’s income/support. And, while that may perhaps be true, for the most part, there is more to it than simply the issue of dependency; especially, when I see the highly educated and economically sound Pashtun women who live right here, in the west, and are still unable to leave their abusive marriages.

As someone who belongs to a fairly progressive Pashtun family, I, too, was raised with the belief that when I married, divorce would be totally out of the question. (I will soon be writing a whole separate post on divorce and especially how divorced women are viewed in the Pashtun culture.) I was often told that I should always respect and listen to my future husband and if he didn’t approve or forbade something, I should just accept it because that’s what “good wives” do. We listen, without question; without challenge. However, as I grew older, and especially once my family and I immigrated to Canada, I began to realize that divorce should not be seen as something bad, or as something evil/taboo. Divorce, albeit stressful and disheartening, for the most part, is also a ticket to mental, physical and emotional freedom, and perhaps even survival; it saves us from a horrific fate that could even result in our demise, whether suicide or murder.

I often have fellow Pashtuns, and other South-and Central- Asians alike, tell me that the West has the highest divorce rates because people here don’t value the sanctity of marriage. Not only is that assumption highly erroneous, but it is very biased and ignorant. As a matter of fact, it’s not that people here don’t value marriage, they do; they value it very much. However, they value themselves — their life and sanity — even more. They have been granted freedoms here that they are able to utilize to their benefit, granted that they have the means, courage and ability to do so. There is no denying that domestic violence exists everywhere; it is not limited to the east. As a matter of fact, domestic violence is not a rare occurrence in North America at all, for according to the National Coalition Against Domestic Violence:

An estimated 1.3 million women are victims of physical assault by an intimate partner each year, and 1 in every 4 women will experience domestic violence in her lifetime.

However, how domestic violence is dealt with differs extremely. Here, in the west, women have rights; yes, they do, as much as we say otherwise. When a woman here reports domestic abuse, her abuser is arrested and she is quickly provided with some form of shelter, if she has nowhere to go. She is well cared for unlike some parts in the east, where if a woman is abused or tortured, society is suddenly quick to blame her for being a “bad woman,” or for provoking her husband by not “obeying him,” or simply justifying that she deserved it due to a plethora of horrible excuses that always makes the man appear like as if he is the victim, and further allowing him to run scot-and guilt-free. (However, I also want to make it very clear here, so as not to appear overly partial, that women are not the only ones who suffer from domestic abuse/violence; men, too, are and have been victims, both in the hands of women and  other fellow men. Yet, there is no denying that the ratio of female abuse to male abuse is much higher. I also want to make it clear that not all men [including Pashtuns and non-Pashtuns alike] partake in domestic abuse/violence; there are many good, decent men out there who treat their wives well — treat them like actual human beings. And, yes, I am married to one. So, when I discuss domestic violence in this post, I don’t expect my reader to assume that I am referring to every single male that lives and exists on this planet; I am only referring to men like Ray Rice — cowardly men, who have no backbone and resort to violence as a means to make their pathetic selves feel better.)

Further, what’s incredibly remarkable about the #WhyIStayed/#WhyILeft discussion is that it allows us the space and opportunity to think and reflect about domestic violence from various different perspectives — women from all walks of life, without having to be biased or limited in our conjecture. And while it’s unfortunate that it had to take a despicable, violent video to drive and motivate this important discussion, considering how prominent a problem domestic violence is in the world, the fact of the matter is that the discussion has started. And that too with a vengeance — empowering and providing a deep, life-altering purpose.

At times, we don’t realize how dire a problem is until we are reminded or exposed to it over and over again. No doubt that we, humans, have a tendency to forget, because we get so caught up in our own lives, in our own problems. The Rice video was thus a wake-up call for all of us to once again pay massive heed to the problem of domestic violence; it also helped spark enough ire to inspire all these once silenced women to bravely come forward and share their stories openly, in the international spotlight. And that, by itself, is very revolutionary.

They say that action speaks louder than words, but in this case, words are an exception as they are being heard loud and clear; the whole world is now taking part in this powerful dialogue and I am hopeful that some form of positive change will happen. When will that change happen? I can’t say for sure; we’ll just have to wait and see.