To all the fathers of the world: love your daughters 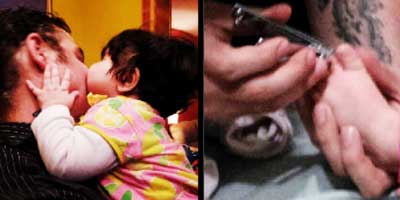 On Father’s Day: Why It’s Important For Little Girls To Have Great Fathers

A few days ago, I had some good friends over and the topic of relationships and mental/emotional stability came up. The friends, whose names I won’t mention for privacy purposes, are a couple and in a very happy, healthy and stable relationship. (And it always makes me elated to see such couples because I feel like I can completely relate to them.) So, anyway, the husband started telling us about his family and how he comes from a fairly good household in that he had a pretty good relationship with both his parents, especially his father and he couldn’t relate to his ex-wife as she had come from an almost broken home where her father often neglected, overly criticized and abused her, both physically and mentally. This, in turn, had affected her quite negatively and for some reason their relationship had also become a reflection of what she had endured while growing up: unhealthy, verbally abusive (she was the abuser), and just plain horrible. However, he feels more content and happier with his current wife because, like him, she, too, comes from a good family in which she is close to both her parents and has often received great support and encouragement in whatever she has pursued thus far. She, especially, has an incredible relationship with her father, who pretty much influenced the great, wonderful and very successful woman that she is today. As a result of that, her nature is pleasant, laid-back, confident and very positive (the most important of all). She is the total opposite of what his ex-wife was like and I couldn’t help thinking that her upbringing and especially her great relationship with her father had a lot to do with it, among other things, of course. And, then, it got me thinking a lot about my own father too and how supportive he has been — and, still is — throughout my life. Never once has he raised his voice or hand to me. Like, ever. My memories of my father from childhood up until adulthood are incredibly sweet. While my mother was a bit of a toughie, my father, on the other hand would spoil me. Rotten. And, being the only girl — only daughter — I was no doubt my daddy’s little girl.

My reader should know that I was born and grew up, less than half of my life, in the Middle East before my family and I immigrated to Canada. And growing up there wasn’t easy, as there were and still are, to my knowledge, too many restrictions on women: from not being allowed to drive to having to cover ourselves from head to toe in a burqa to not being able to travel alone anywhere without a male chaperone, etc. Of course, I was very young when we left (I was about 13 years old), but when we lived there my father ensured that neither me nor my mom were bothered by the strict rules of that country. He would take us to “safe” places where we didn’t need to cover up (not sure about now, but back then, some places would be swarmed with the religious [Islamic] police aka Mutawas, who would carry sticks and order women to cover up by threatening to hit them in public if they didn’t; it was despicable, to say the least). My father would avoid those places as much as possible. He would instead take us to the beach (more specifically known as the cornishe) quite often or to the compound malls, where I didn’t have to wear the abaya/burqa. He was always kind, considerate and undoubtedly the sweetest, most intelligent man I’ve ever known and love; my husband, of course, being a close second.

A good father can be empowering. Very empowering, in fact. And while, in my culture (Pashtun), which is highly patriarchal, fathers empowering their daughters is rare, it’s not completely impossible. Examples include Ziauddin Yousafzai — Malala Yousafzai’s endearing, extremely supportive and proud father. And proud he should be, for if it weren’t for him, Malala would not be such an influential and iconic figure worldwide, nor would she have had the courage and confidence to pursue and stand up for something that her father — a man, yes — had vowed to instil in her since the day she was born. Then there is Shamsul Qayyum Wazir – Maria Toorpakay’s (the famous Pashtun Squash player) father, who, albeit an elder tribesman hails from a highly male-dominated and conservative region in northern Pakistan, managed to go against the norm and allow his daughter to play sports, even if needing to guise her as a boy to do it. He, like Ziauddin Yousafzai, wholly supported his daughter, which in turn allowed her to gain confidence and come as far as she has in her exertion against oppressive forces, which would have otherwise denied her the life that she leads today. And, while no man is perfect, a growing girl needs to see a father who is there for her; one that cares about her immensely, and allows her the freedom and privilege to pursue her goals and passions.

We all know and understand that fathers are, for the most part, a primary male model in every young girl’s life. Just his presence in her life deeply influences and affects her in profound ways, from how they view themselves to what they come to expect from men and the world at large. Unfortunately, many men don’t understand how impactful their presence can be and perhaps even is in their daughter’s life. And the more involved they are, the better it is for the girl, because not only will she grow up to into a happy, confident and successful woman, but she will also be mentally and emotionally stable, especially in terms of relationships. Now, I don’t want to appear like a psychologist, as whatever I am discussing in this post is simply based on my own personal experience and observations. Women (including myself) I know and have seen, who are in very happy relationships, also have fathers who, too, have been their rock and their biggest supporters and motivators while growing up. And when daughters feel love and support from their fathers they generally have good relationships in marriage.

Most women, whose fathers have gone against traditional norms (religious or cultural) and have rejected stereotypical gender roles with images of the father helping around the house in terms of cleaning, cooking, washing dishes, etc., are happier and healthier, both in terms of their mental and emotional well-being. Witnessing both parents taking on non-traditional roles, both at home and outside, indeed has a very positive impact on her perception of what men’s role in a family relationship is all about. It conditions her in a good way — a healthy way — where gender roles are nonexistent and gender equality becomes the basis of her foundation. For, as a little girl, the first love in her life is her father and how he treats her will have a huge effect on her relationship with men later on in her life. And when fathers are true to daughters and true to the best in their masculine heritage, they (the daughters) will learn to respect men and treat them as equals. Consequently, a daughter will learn to gravitate towards men who respect her and treat her as an equal, while turning away from men who disrespect, violate/abuse, and treat her like anything but an equal. Hence, I can’t help agree that the Freudian theory of marrying or being with someone who has traits similar to someone you love and admire — usually a parent or a close sibling – is true. While my husband and my father aren’t exactly alike, I’ve realized that they do share very similar characteristics that further emphasizes my point about why it’s important — so, very, very important — for young girls to have great fathers, or great father figures.

Oh, and speaking of my husband, gosh, where I even begin to praise him? Not only has he been the most incredible, most loving, and most kind and supportive partner ever, in our amazing six years together, but I also see the way he is with our now 10 and a half month old daughter. The way he drops everything to play with her, talk to her, and even sing to her. The way he dotes on her and ensures that no harm ever comes to her. The way he’s always online checking reviews of fun, educational toys for her to ensure that she gets the safest and best quality toy that exists in the market. The way he loves her, like so, so much, and showers her adorable face with kisses, until she gets annoyed and cries out. Just watching them together makes my heart all warm and fuzzy. He will never be the type of dad who will say he is too busy to spend time with his little girl. No way. And because of him, my daughter is the most luckiest girl in the world. And I’ll make sure she always remembers that, for she is on the beautiful road to becoming another Malala Yousafzai and another Maria Toorpakay. Heck, she will be her very own example! No doubt about that.

So, to all the fathers of the world: love your daughters. Like really, really love them. They are nature’s most brilliant gift. Be there for them when they need you; talk to them, as communication is key; and ensure that you set the best example for them so that they will grow up believing in the beauty of equality and in the beauty of true love and happiness. The ball’s in your court, dear fathers of the world. Treat your daughters the best and you will die a very happy human being. 200 percent guaranteed.

On that note, here’s wishing a very happy Father’s Day to all the amazing dads in the world, including my beloved father and hubby.