Are We All Malala? 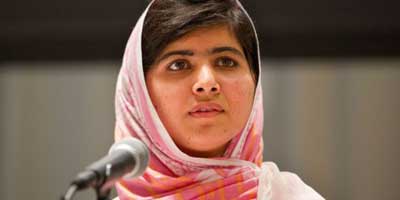 When the slogan ‘We are all Malala’ was first coined, its message was well received in that Malala Yousafzai had suddenly become a mirror of change and hope; she had become a reflection of all the possibilities that were once limited in a region where women and girls are gravely denied their basic rights – particularly their right to education. Countless people, all around the world, started to use this slogan rather copiously, believing it to be a sort of resistance against not only the Taliban, but against any force that aimed to oppress and subjugate women and children.

The whole world, thus, stood in solidarity to support and encourage Malala’s mission, for they knew that Malala wasn’t the only child who was suffering as there were countless others who, too, were struggling for peace, justice, and equality. Malala’s struggle had, in turn, become everyone’s struggle. Many believed that Malala’s fate could have been anyone’s fate; it was this great feeling of empathy that fueled the popularity of the ‘We are all Malala’ slogan, allowing everyone to embrace it wholeheartedly, and with great fervour and passion.

Now, almost ten months later, though the slogan holds the same weight, or may perhaps even succeed the power and influence it had before, I can’t help but notice that there are many who are questioning, and further doubting, its validity. Thus, I felt the need to write this blog post after having had the great privilege to listen to Malala Yousafzai’s incredibly inspiring speech that recently took place at the United Nations in New York City on July 12, 2013. What struck me about her speech was not the bold and graceful way she delivered it, but the fact that she is only 16-years-old and has endured so much for a child her age. Yet, despite the plethora of praises and admiration she received for her bravery thus far, she has been equally bashed, criticized and accused of being a “US puppet,” while also being responsible for other conspiracies such as supporting US drone attacks and army operations.

There appears to be a mass out there that has either failed to comprehend, or turned a blind eye, to Malala’s true message and the struggle that is initiated by those, like her, who actually care about education and the protection of educational institutions. Hence, the focus is deliberately diverted from this struggle for education and Malala’s true intentions to the incessant backlash on her personal life. Many also fail to realize that good intentions can arise and exist regardless of creed, culture, class or ethnicity. And this is one of the most crucial points that Malala wanted us to understand, which is why, in the beginning of her speech, she went on to thank several leaders from all backgrounds and religions that have made a difference in the world. As she said in her speech:

Further, what many of us have misconstrued is that the ‘We are all Malala’ slogan was never meant to isolate Malala as the sole young woman who had suffered, for we all know and are very well aware that there are countless young women, like Malala Yousafzai, who are suffering and dying on a daily basis in the hands of not only misogynistic barbarians, but also due to war, health and maternal issues, natural disasters, poor economy, bad governance, etc. Yet, this slogan loses its real purpose and meaning, especially amongst those who feel that we are giving Malala way too much attention and credit than she deserves. However, it needs to be understood that this is not about Malala per se, but rather it is about what she represents and stands for, which is justice and equality in terms of freedom and education for women, men and children alike.

For this reason, we sincerely need to re-evaluate ourselves and put all our detestation and resentment for this young woman aside, because it is doing us more harm than good. Let us stop focusing on the petty, insignificant things and start looking at the bigger picture. There is a reason why the universe has gifted us a young woman like Malala, and there is a reason why she survived. Her life has a purpose – it is a lesson for those of us who, too, are struggling for the same rights and freedoms.