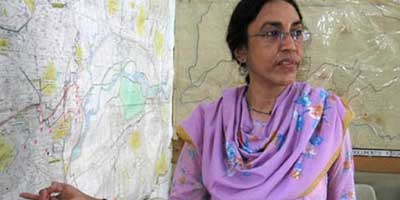 Each morning I wake up, I dread reading the news. I dread it because I know I will come across something dreadfully distressing. The word ‘news’ itself, to me, has become something extremely negative. I now rarely associate news with anything positive any more  And the chaos and turmoil that Pakistan is going through right now further adds to this personal trepidation. Just when I thought the New Year couldn’t start off or get any worse, things have now taken a turn for the worst!

Not a day goes by that we learn about mass killings (due to ethnic and religious conflicts), bombings, or a number of brave humanitarian workers/volunteers being shot dead all across Pakistan. And today is no different, for my Twitter timeline is filled with condolences and tributes to the late Parveen Rehman – a great social activist, wonderful teacher and humanitarian worker, who worked as a director and was heavily involved in the Orangi Town Pilot Project for 25 years. Apparently she was targeted and killed by multiple gun wounds, by Deobandi militants of ASWJ aka Lashkar-e-Jhangtvi, as it was reported here, while travelling in her car, near Orangi Town’s Peerabad neighbourhhoud, on Wednesday March 12, 2013.

I wish I could say that I’ve become immune to these uncalled for murders, but I can’t. I am still not over the murders of Faridi Afridi – the brave advocate for women’s rights in FATA, nor that of Anisa’s – the young polio volunteer worker in Kapisa province (Afghanistan). It pains me to learn about the brutal and untimely murders of these brave women, whose aim is to better the lives of not only fellow women, but of society as a whole.

For those who are familiar with Karachi and especially Orangi Town, it is considered as the largest slum in South Asia and is located in the periphery of the city of Karachi. Unlike other parts of Karachi, Orangi Town consists of the poorest of the poorest living inside the slum, struggling to make a living. And two of the main infrastructure problems that the residents are currently facing are that of energy and water shortage.

Thus, the NGO, Orangi Pilot Project (OPP), started and began work in Orangi Town in 1980. Its main aim consisted of five basic programs that they were able to implement successfully over the past three decades; these included low cost sanitation, housing, health, education, and credit for micro enterprise.

And seeing that Parveen Rehman was actively a huge part of this development project, one can’t help but wonder what wrong did Parveen Rehman do in trying to help these people attain a livelihood and better living conditions – a woman who had dedicated 25 years to work in establishing and implementing development initiatives in one of the most treacherous and poorest slums in Asia! It’s so mind-boggling that no matter what justification they give, if any, I’ll never be able to wrap my head around it. It’s so wrong. So inhumane. And so incredibly unfair to end the life of someone whose only crime was to help these poor, helpless people living in such impoverished and dire conditions.

It almost seems to me that people in Pakistan do not want to develop; development is a looming monster that becomes a huge threat as soon as someone tries to push it forward. And rather than supporting and encouraging such brave humanitarians — like Parveen Rehman — who’d dedicated as well as put their lives on the line, to help the poorest in the region live better lives, they are instead murdered. And with them, all hopes and dreams for a better, more economically sufficient future, wither away too.

Pakistan has thus become one huge tragedy. And they have no one to blame for it but themselves!

May our dear, brave Parveen be forever commemorated for the great that she’s managed to accomplish for her people and her country, thus far, and may she rest in peace.

The author is a PhD student in international rural development, focusing on Gender and Development of Pashtun women. She blogs at http://sesapzai.wordpress.com. Follow her on Twitter @sesapzai.

Disclaimer: Views are those of the author and do not necessarily reflect the views of Safe World for Women or its staff.