The Importance of Men And Masculinities in Gender and Development 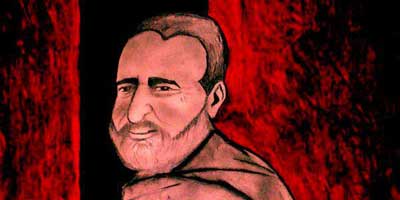 "Bacha Khan - The Frontier Gandhi" - Portrait by SesapZai, © Jan 2011 [Charcoal pencils and oil pastels, 18X24]. Ghaffar Khan was a Pashtun political and spiritual leader and a champion of women's rights and nonviolence.

We are often bombarded with the clichéd belief that women are victims whereas men are culprits, when it comes to the issue of gender inequality. Yet, this assumption is not wholly impartial. The reason is because men, too, are victims in this struggle for justice and their inclusion in the social development process may, in fact, positively affect empowerment and strengthen the fight for gender justice. Thus, we cannot simply exclude men from the development (of women). Why? Well, although the logic goes that – given that it is women who are disadvantaged by gender inequality – it is women who have a claim for redress; and hence gender issues are of no concern to men. Yet, this logic can no longer be sustained, for as Raewyn Connell (2003: 3) notes:

“Men and boys are unavoidably involved in gender issues.”

This is because gender inequalities are based in gender relations, and in the complex webs of relationships that exist at every level of human experience. So, including men in the development process (of women) is necessary because gender inequality is intimately tied to men’s practices and identities; men’s participation in complex and diverse gender relations; and masculine discourses and culture. In order to foster gender equality, it requires change in these same arenas, of men’s lives and relations, as well as their thought patterns. In other words, we need to examine the factors that have contributed to their thought processes and their actions.

Furthermore, when we involve men in the gender and development agenda, the greatest and most rewarding challenge is to understand gender in a more nuanced and interactive way. This not only implies the sole need to bring men in, but also to interrogate how exactly ‘men’ and ‘masculinities’ are defined and conceptualized. Though, there are a plethora of definitions, depending on which perspective we’re looking at. But if we were to focus on gender and development in the South, for example, among the Pashtun ethnic race, there would be a deep inter-connectedness between men, power, and patriarchy, which are all undoubtedly at the forefront of hindering women’s development in the region (Khyber-Pakhtunkhwa).

For instance, when we discuss violence against women, especially in the South, it relates directly to the power ascribed to men by patriarchy. Exploring patriarchy in light of the diversity of masculinities in Central and South Asia, including their points of vulnerabilities, can indeed foster alternative conceptions of masculinity. In other words, when we include men in the development process, we come to accept the notion that their identities and roles in society are not fixed; but because they are socially constructed, they can be modified and transformed in order to accommodate freedom and rights of fellow women.

There is no denying that male inclusion increases men’s responsibility for change. Explicitly addressing men can increase men’s belief that they, too, will gain from gender equality and can engage men directly in the renegotiation of gender relations. Male inclusion can speak to many men’s sense of anxiety and fear as ‘traditional’ masculinities are undermined. Therefore, men can be, and are motivated, by interests other than those associated with gender privilege. There are important resources in men’s lives for the construction of gender-equitable masculinities and forms of self-hood; these include men’s concerns for children, intimacies (sexual) with women, as well as ethical and political commitments. While men ought to change, it is also in men’s interests to change. There is a moral imperative that men give up their unjust share of power, which I strongly believe will benefit men themselves, hence paving the way towards gender equality.

Thus, it would be unmerited to constantly perceive men only as obstacles to women’s empowerment, for it is also worth recognizing that some men are already playing a role in fostering gender equality. There already exist many men who are already living in gender-just ways, not only in the West, but in the East as well. These are men who respect and care for the women and girls in their lives through their rejection of traditional, sexist norms of manhood.