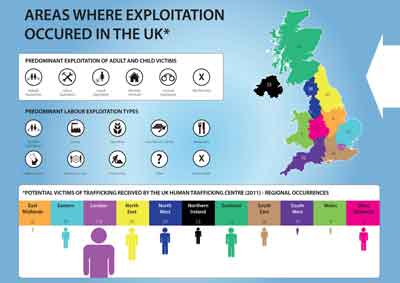 In a historic decision this week in the House of Lords, amendments have been made to the Modern Slavery Bill in order to provide legal guardians of children who are victims of trafficking in England and Wales.

The Modern Slavery Bill, due to be passed before the General Election, will give children who have been trafficked advocates to act in their best interests. These advocates will have statutory powers, including the power to appoint and instruct legal representation for the children. This decision to make last minute changes to the Bill follows in the wake of a similar law being passed in Northern Ireland last month.

This is a landmark moment for extremely vulnerable children. UNICEF reports that more than 10 children per week are trafficked in the UK. These children have suffered physical, psychological and sexual abuse and are often alone in the UK without their parents or any adult who has their best interests at heart. Child victims of trafficking often do not disclose that they have been trafficked, as they regularly do not identify as victims or alternatively fear their trafficker and the potential repercussions of disclosure. It is therefore of paramount importance that these children are appointed a guardian whom they can trust and who can act in their best interests.

This is welcome news for the many organisations that have been campaigning on this issue for several years, including the Refugee Council, UNICEF, ECPAT and The Children’s Society. In research undertaken by the Refugee Council and The Children’s Society in 2013, it was found that the majority of child victims were unhappy with the care and support they received from social workers, with children having little continuity of care and regularly having to repeat their experiences of abuse. Children often reported not being listened to and being unable to trust those expected to be acting on their behalf.

The research also found that when a child felt that they did not have an adult whom they could trust, there was an increased risk that they would be re-trafficked. Therefore, it is clear that child victims of trafficking should have a reliable adult in their life, who is independent from other services and who can help the child navigate the lengthy and stressful processes victims of trafficking are involved in.

Acting independently, with the power to challenge bad practice, these advocates can ensure that trafficked children have access to the educational, medical, and legal support necessary to end the trafficking cycle.

This is a deeply significant step in reforming trafficking law in the UK and must be lauded for helping ensure that that child victims of trafficking have the opportunity to begin their lives again as survivors.