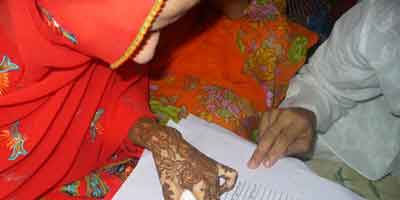 Most cultures around the world, being patriarchal and patrilineal, uphold the thinking that identity is passed down from the father to a child, not from the mother.

The mother’s identity is thus completely overlooked while the father’s identity is favored, a practice demonstrated in multiple ways. Needless to say, this mindset contradicts biology, since the children’s identity is half that of the mother’s and half the father’s; the mindset is thus rooted in a certain discriminatory attitude towards women, a sort of contempt for them and their being. Such cultures also expect their women to abandon their own identities and adopt their husbands’ by taking the husband’s last name. Contrary to what one might assume, a name is a powerful identification marker, and the name-change is thus a symbolic process—if it is not, then why is the change necessary at all?

Historically, also, most cultures have deemed the female incapable of making her own decisions, and she is thus placed under the supervision of others, almost always a male figure.

While there is nothing “natural” about this quality that has been attributed to her, society came to purport that the female is “naturally” weak and must be protected. A consequence of her “weakness,” many societies still continue to teach us, is that she may easily fall prey to the harms of the “outside world” and the “outsider(s).” These “outsiders” are often people who do not belong to the female’s race or ethnicity. As such, the woman must not be permitted to marry any “outsiders.” But not all “outsiders” are “harmful” to women, so can she marry the outsider who appears harmless? The idea then changes here: if she does marry an outsider, then her children will also be outsiders—because the identity of the children is the same as that of their father’s regardless of their mother’s. In simpler words, the woman’s—the mother’s—identity is completely worthless, despite the critical roles she plays in the upbringing of her children, including passing on her language and culture to them, in patriarchal societies.

The Pashtun culture is unfortunately not exempt from the above thinking, and in the 21st century, if not before as well, this is an injustice to those who consider it a necessary option. As the number of Pashtun women marrying “outsiders”—i.e., non-Pashtuns—increases, especially among Pashtuns in the West and in other communities with significantly small populations of Pashtuns, more and more women become subjected to the derision of those who believe in the superiority of the Pashtun race, an invisible superiority that is apparently marked solely by endogamous marriages and obscured by exogamous ones. In essence, however, the derision is not due to the false claim that the Pashtun woman’s children will not be Pashtun: it is because the Pashtun woman had the audacity to cross the boundaries to which she, like the women of many other cultures, has historically been confined. She simply made a decision for herself that contravened the low opinion that much of the rest of society has—had—of her.

Condemned for their choices

The disgust towards Pashtun women who choose to marry non-Pashtun men is actively displayed in virtual Pashtun communities, where these ladies are incessantly condemned for their choices. The idea is clear and specific: Pashtun women should not be marrying non-Pashtuns regardless of their choice; their marriage to such men is an affront to the Pashtun man, who is the obviously perfect match for any Pashtun woman—regardless of her preferences, expectations, standards, and choice. Women are therefore not expected to possess any agency whatsoever, any power, over their own lives, and the moment they do that, especially in the case of marriage, they are denied their Pashtun identity and are accused of hating Pashtuns and Pashtun men.

So why would a Pashtun woman, particularly one who appreciates her identity and culture and works on the cause of Pashtuns, marry a non-Pashtun man? There are several possibilities, but one of the most prominent reasons is a lack of availability of compatible Pashtun partners. From my conversations with and observations of Pashtun women who have married non-Pashtun men, I have also learned that they made their decision based primarily upon their experiences with Pashtun men around them; while the men may make excellent fathers and brothers, they do not always make good husbands, according to the standards that many Pashtun women set for themselves. These women do not instinctively assume that a non-Pashtun man would be naturally better, however: the patriarchal mentality common to most Pashtun men is hardly unique to them and is shared by men of many other cultures, including virtually all South Asian cultures.

Notwithstanding the above points, it is also true that some Pashtuns who deny Pashtun women the right to marry non-Pashtun men also deny the same right to Pashtun men. However, the denial is not as severe for men as it is for women: men hardly face condemnation, and no one ever questions their identity or the identity of their children while they do the woman’s and her children’s.

As Pashtun women reach the age of marriage, some, if not many, might turn to non-Pashtun men for marriages rather than Pashtun ones, and their decisions are not baseless but are rooted in their experiences, observations, and expectations. For the “average” Pashtun woman, the first choice for marriage is not a non-Pashtun man, but he is and should be an option for many of them. To be limited to a man of the same ethnicity—and, in the case of most Pashtun women, also of the same district and preferably same city or village—is not the most practical option anymore. There is a culture that we are born and raised into, which is often the Pashtun culture, and then there is a culture that everyone has as individuals. When it comes to marriage, the best partner for most, if not all, people is the one who shares our individual cultures, the culture that is ultimately the most important culture of all in our lives.

Orbala is a cofounder of Pashtun Women Viewpoint