Her name is Anisa: Murder in Afghanistan 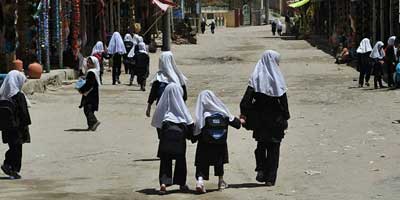 Her name is Anisa: Murder in Afghanistan

As the Urdu poet Habib Jalib says in his "Mein ne uss se ye kaha" ("so I said this to him"), jin ko tha zabaa pe naaz chup hai voh zaba daraaz ("those eloquent with pride (poets) are silent today!").
What an apt verse for today!
See, another Malala has been attacked-- and unfortunately killed-- and no one is talking about it. Her name is Anisa. She was in 10th grade, an activist for women's rights and education, and volunteered at a polio vaccine clinic run by the Ministry for Public Health. Here, an important reminder might help explain the Taliban's motives for killing her: besides Anisa's fight for girl's education and her activism, she clearly recognized the need for polio vaccines in her region; the Taliban, however, believe, due to rumors about the vaccine, that "It'll make the children sterile; it contains the AIDS virus; the vaccinators are really CIA agents."
She had survived an attack on her life the day before, but the cowards attacked her again, shooting her several times in the stomach. The young activist school-girl did not survive, and this time, unfortunately, the enemies of humanity, of peace, of love, of justice won. Only humans with disturbingly musty souls must feel like they achieved something big for having killed this child.
Dear people, when we demonstrate such partiality towards our victims, we affirm conspiracy theories like the one currently being spread about Malala's case: that she was a CIA agent and that both the U.S. and Pakistan are involved in her attack... that the attack on her was more than an attack and entailed something more, something bigger than the Taliban.

A few weeks ago, in response to many questions regarding Malala--such as why Malala is getting so much international attention and love but other victims, such as those of U.S. and Pakistan army operations get no moments of silence, no vigils, no reaction, no sympathy, no empathy, no love from anyone at all.
I explained why Malala was deserving of all the attention she was receiving. And I still believe this: Malala is a brave girl, she represents hope and courage for all marginalized and subjugated groups of people wherever they are, and she has earned all the attention she has received thus far. But I believe this about Anisa, too. Anisa's case is even more unfortunate, since we have lost her. So whereas my hope in humanity grew as a result of the international outcry against Malala's shooting, the same hope is waning because no one is speaking out against an equally important victim named Anisa.
For weeks, and perhaps even at the moment, we saw many images and reminders all over the world that "Today, I'm Malala," that we're all Malala, that any victim of forced silence is a Malala, but where's our voice now when it's most needed, when an another actual Malala has become a victim of religious extremism? Did we really care about Malala, world, or were we just frustrated for some other unknown reasons and it was just a great time and way to vent ... or something? There I was, innocently and foolishly--no, stupidly--thinking that the world actually genuinely cared about Malala and justice!
I won't try to offer any reasons for the world's petty silence over Anisa's murder; to do so would be to subtly justify and lamely excuse this unjust silence. But we should be ashamed of ourselves. One day, we're crying over a brutal attack on a young innocent female activist who was almost sacrificed for her voice and efforts, yet we're completely silent over another but successful brutal attack--and a brutal assassination--on another young innocent female activist who is actually sacrificed for her voice and efforts.
No one's blogging about her. No one hears about her on TV. No one is creating any (many) memes for her. No one's doing any vigils for her. No one's praying for her. No one's closing schools in her honor. No one's suggesting we have an International Day in her honor. Are we not being hypocritical for our selective appreciation and support? Whereas Malala symbolized the cowardice and lack of success of a violent and unjust group of people, what does Anisa's attack symbolize, seeing that this cowardly and violent group actually succeeded in her case?

What would Malala say about Anisa's murder? How would Malala respond to this? I see Malala as a lover of justice, someone who believes in the power of voice--as well as in the power of silence--and I believe she'd be disappointed enough to openly condemn it. I wonder if she has been informed yet.
Anisa lives no more, but her legacy needs to live--her soul will linger with us till the end of time; it should haunt us all day and night, making us look inside our own corrupt souls so for completely neglecting her.

Rest in peace, Anisa Jaan. Rest in peace. God bless you with the infinite peace you were utterly deprived of in this world and which you were sacrificed for. I am truly sorry that I live in a world that doesn't deem you worthy of any attention, but you will still not be forgotten. Never. Rest in peace!

And get well soon, Malala Jaan! We definitely need you today more than ever!
Facebook Page: Justice for Anisa