Why Malala? Some Answers 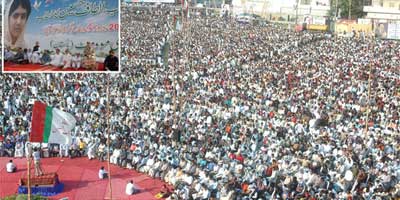 Why Malala? Some Answers

Since the discussion on "why Malala?" isn't coming to an end any time soon, I figured it's worth addressing. If you or someone you know can't figure out why Malala has become an international heroine, a beloved of everyone around the world, "just because" she was shot by the Taliban while all these thousands of innocent children get killed--not just shot--on a daily basis in war-torn areas haunted by the U.S. army and Pakistan, then what I'm writing below is especially for you.

As humans, we tend to sympathize more with people we know or know of than with people we don't know. Malala rose to fame in 2009 as an 11-year-old, and everyone who came to know of her fell in love with her courage and perseverance. So she was already a beloved of the international community. And, so, when she got shot, people, including those who didn't know her, knew who had been shot. In other words, Malala was (is) a celebrity. And we all know that when a celebrity is hurt (or when they pass away-- may God forbid that in Malala's case!), everyone comes to know of it, everyone offers their condolences and sympathies, and everyone who loved or knew (of) the celebrity is affected by it at least temporarily. That's exactly what happened in Malala's case. I understand that reminding people to also mourn the losses of innocent kids and others killed by the drones (and Pakistani shelling), and I completely agree that no one human life is any more important than another--but realistically and psychologically speaking, people do see Malala, a celebrity, a well-known personality, as someone more worthy of attention and love and prayers than those whom they don't know -- i.e., the little children and women and men who are killed daily in wars. This issue reminds me very much of when Ghazala Javed, a Pashto singer, was murdered in June, and people kept saying, "Why is everyone talking about Ghazala but no one ever talks about the kids killed in war in Afghanistan, Pakistan, Iraq, etc."? And so I wrote a blog post on that to explain why we mourn the loss of celebrities and not so much the loss of people "unknown" to us. This does not mean I like this idea. Again, I think all human life is equal in worth, and my heart goes out to anyone affected by the loss of anyone killed or otherwise hurt as a result of violence. But I'm trying to explain "why Malala?"

Moreover, Malala wasn't just "any" person; she wasn't just "any" child. She was someone who resisted a violent force at a time when few had the power and the will to do so. We owe her so much gratitude that the least we can do is to offer her our prayers and give her our attention when she gets shot for trying to improve OUR lives. I don't know how she feels about the fame she's been getting since 2009 and especially since her attack, but I'm quite certain that the last thing an 11- or 15-year-old in her position wants is fame and glory! She seems to me very sincere in promoting girls' education and ensuring that if not her, then at least her children’s generation is able to send girls to school without any threats of violence.

Also, of course, let's think about what and who all Malala represents. For this, I'm going to paste from my article "How Not to Talk about Malala":

Indeed, Malala represents all women rightfully demanding to practice their right to speak up against injustices as well as any other right that they rightly believe are inherent to them. But Malala is not a symbol of Muslim women’s resistance to mistreatment and injustices— she is in fact a symbol of the resistance of all humans, irrespective of their religious, sexual, gendered, racial, national, and all other identities. She represents the mind, Muslim or not, that is deemed a threat to the social structure of any given society, the voice that is constantly but unsuccessfully silenced because of its power, its potential to bring change that many in any given society often fear. This change should not be limited solely to women’s right to schooling; it should include all people’s human rights—which encompass the rights of all marginalized and “othered” individuals and groups, particularly those against whom discrimination of various sorts has historically been normalized. It is this symbolism of Malala’s case that helps us to understand and appreciate Malala’s struggle as one that all humans, particularly all marginalized groups of people, can relate to, empathize with, and perhaps even sympathize with.

Sure, all children of war and violence also represent something powerful: they and their families are being harassed, killed, and destroyed in the wars of the rich, and each dying child is a reminder to us of how low humanity has stooped in the last few centuries in the same way that the attack on Malala is a reminder of the same thing. But what distinguishes Malala from most other children victims of violence is that she chose to do this, she chose to pursue this dangerous path of fighting women's equal access to education and to leadership. (No, I'm not insinuating that this means that the other kids are not important! But there's some credit to be given to Malala for doing what she is doing, and I see no purpose and no point in denying this.)

And with that, I will conclude. Next time you resent the attention and love and respect Malala is getting, remind yourself of what all Malala has come to represent. I understand that children of war represent something too, but while condemning war and the lack of respect given to children and other victims of war, there's no need to attempt to deny the admiration, attention, and gratitude that Malala deserves.

Also Read: Praying for Malala Yusufzai, a Pashtun Symbol of Hope and Courage

Orbala is an Islamic Studies student with emphasis on gender relations in Islamic law and Muslim societies. She blogs at orbala.blogspot.com and tweets at @qrratugai.